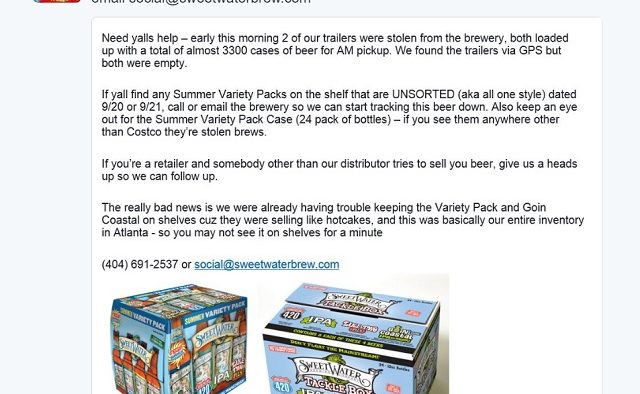 Atlanta-based SweetWater Brewery reports that thieves made off with nearly 3,300 cases of beer after stealing two of the company’s trailers.

The theft occurred early in the morning on June 21.

The company reported via Twitter that the trailers were found via a GPS locator, but the beer was missing. WSB-TV reported that half of the stolen beer was located in a Clayton County warehouse.

“Officers responded to 195 Ottley Dr at the Sweetwater Brewing Company in reference to a stolen trailer that contained multiple cases of beer,” the Police Department said via emai. “There are no cameras in the front loading area. The trailer was found by another driver and was reported that it was heavily ransacked. Officers received a call … later in the day to report that a second truck was discovered to have been taken. Both Conley PD and Clayton County PD were contacted by the victims and their items were recovered, however they are unsure on the amount still missing. They did report that inside the second truck there was a large amount of damaged property on board.”

SweetWater asked customers to be on the lookout for the stolen goods.

We need your help tracking down stolen brews! Call us at (404) 691-2537 or email [email protected] pic.twitter.com/HAmWtJbUYK