Anna’s BBQ in Kirkwood is a family affair

Anna’s BBQ in Kirkwood is a family affair 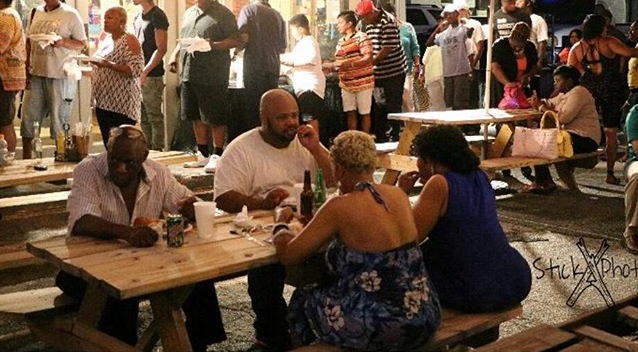 An overflow crowd chows down on the patio at Anna’s BBQ. Photo provided to Decaturish
Share

An overflow crowd chows down on the patio at Anna’s BBQ. Photo provided to Decaturish

Her grandparents, Henry and Annie Louis Buice barbecued chicken, beef, ribs, and other Southern culinary specialties in a pit they maintained in the yard behind their house on Ridgedale Road in Kirkwood.

Since 2013, Anna has served up home style barbecue with a variety of other Southern-style meals to customers of her own at Anna’s BBQ, located at 1976 Hosea Williams Drive, in Kirkwood.  The restaurant draws patrons from around the Metro area, including choosy diners from as far as Buckhead, Conyers, Marietta, and Alpharetta.

Decaturish recently dropped in on Anna at her restaurant. A row of sticky notes containing customer comments on the food, staff, and service lined the counter, laminated for posterity.

The small colored pads of sticky notes lie here and there around the restaurant. Diners use them to leave thank-yous, compliments, good vibes, and special requests. Anna’s daughter, Destiney, who also makes a strawberry lemonade that’s very popular with patrons, came up with the idea of using the notes to solicit customer feedback.

Anna’s mom, Lola, contributes a popular pound cake to the restaurant’s dessert menu, and her stepfather, Charles Harper, grills out on the patio once a month. 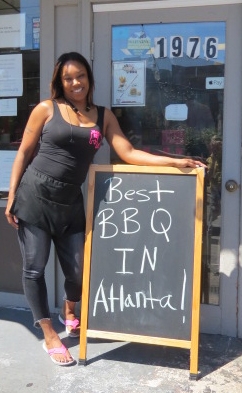 Passersby on busy Hosea Williams Drive also drop in to sample the offerings, and many become regulars.

The restaurant was named, though, not for its owner but for a three-year-old niece (now six) who is a fan barbecued chicken.

Anna’s menu includes all the staples – chicken, pork, and beef – as well as turkey ribs, smoked turkey legs, cube steak, grilled salmon, and even barbecued spaghetti. Pot roast is a specialty on Sundays, along with chicken and turkey, both served with dressing.

Anna uses a baste that she inherited from her grandfather, Henry Buice, who, along with his wife Annie, regularly cooked homemade barbecue on throughout the year. Henry’s recipe for BBQ baste, a mix of onions, vinegar, Worcestershire sauce, water, and salt and pepper, is still in service at Anna’s, applied to the barbecue while the fire is flaming. Anna’s barbecue sauce is also homemade, by her uncle Brady, but that recipe is, of course, secret.

Anna is an Atlanta native, and most of her family still resides in the Kirkwood neighborhood.  Her parents live close by in Decatur.  Food service seems to run in the family. Anna’s aunt, Linda, owns and operates My Coffee Shop, on Memorial Drive near East Lake.

“I never did anything like this before,” Anna told Decaturish, reflecting on her experience as a restauranteur.  Her previous business experience involved truck leasing – dump trucks – a business she sold when construction declined in 2009. 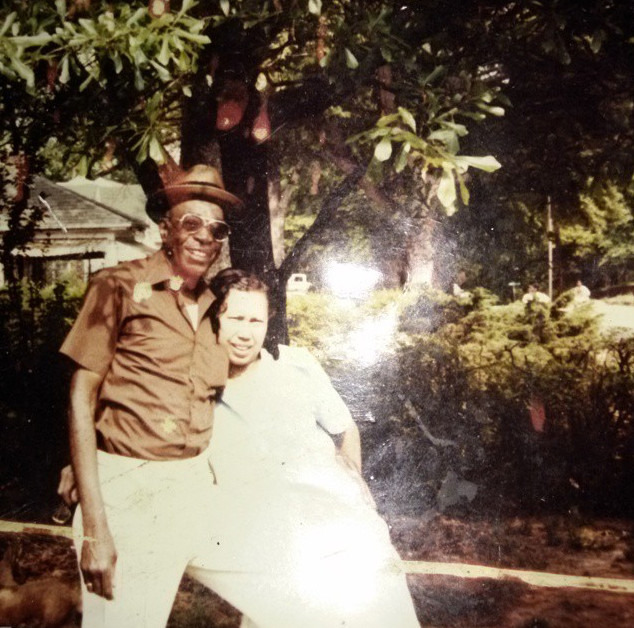 She has also worked as a personal trainer, and continued to offer the service on a part-time basis until last year.

“I don’t have the time for it now,” she says with a smile.

Anna spends Thanksgiving, and Christmas too, serving lunch and dinner at the restaurant.

The business also contributes its share to the needs of the community. The restaurant fed the homeless this past April. More than 250 people dined on chicken and turkey salad, and each received a packet of personal care items such as toothpaste and -brushes, mouthwash, and deodorant.

Correction: An earlier version of this story misidentified a person named in the article. This story has been updated with the correct information.