Among the issues addressed was the ongoing discussion between the City of Avondale and developer Euramex.

In 2014, Euramex purchased 13 acres adjacent to 4 acres already owned by the city of Avondale in the heart of the downtown. According to Lisa Shortell with community advocacy group Second Century Avondale, talks between Avondale and Euramex reached an impasse due to the developer’s desire to build a 46,000 square foot grocery store on the downtown acreage currently owned by the city.

Shortell said Second Century Avondale agreed with the city’s rejection of the proposed large grocery store, which would be out of scale with the Tudor Village retail center. Shortell added that such a development would be incongruent with the vision both her group and the city hold for downtown Avondale.

However, last night Mayor Jonathan Elmore announced that Euramex has submitted a number of new development concepts that abandon the large scale grocery store plans. Elmore said Euramex’s “new scheme only involves their 13 acres” and “none of the City-owned 4 acres.”

These new plans include designs for townhomes, apartments and retail space and individual restaurants. The new concepts submitted by Euramex support the city’s current plans to develop its acreage into a town green.

City officials and community members agreed creating more public spaces such as a park would not only enrich the quality of life for current Avondale Estates residents but also future residents of the Euramex development.

Several Second Century Avondale members said city-sponsored and owned development would also be an asset and incentive to Euramex, making the currently developing plans a win-win for all parties involved.

Of the concept designs shared last night, Concept C received most interest and support from members of the board and community members. This design provides a mixed-use development including commercial space which would help stimulate the growth of the downtown and likely create opportunities for investment back into the city.

Elmore said that the board will encourage Euramex to submit new zoning plans. He was quick to add that the Euramex development is still in its early stages, but things are moving forward.

Second Century Avondale member Eileen Hickey was excited about the new Euramex concepts and expressed her admiration for city officials. She said the city’s leadership is “always looking at different ways to finance and find a way to make our vision [for downtown Avondale] a reality.”

Elmore acknowledged that the city is only beginning to brainstorm about the future use of the city-owned four acres. Potential projects, in addition to the town green, include a natural amphitheater.

Shortell is hopeful that this emerging vision includes “a walkable downtown and high quality of life” for residents of Avondale Estates.

She said, “Tonight is a wonderful start to the DDA and community pulling together and speaks to the spirit of Avondale”.

Here are some of the concepts for a town green discussed during the July 21 meeting. 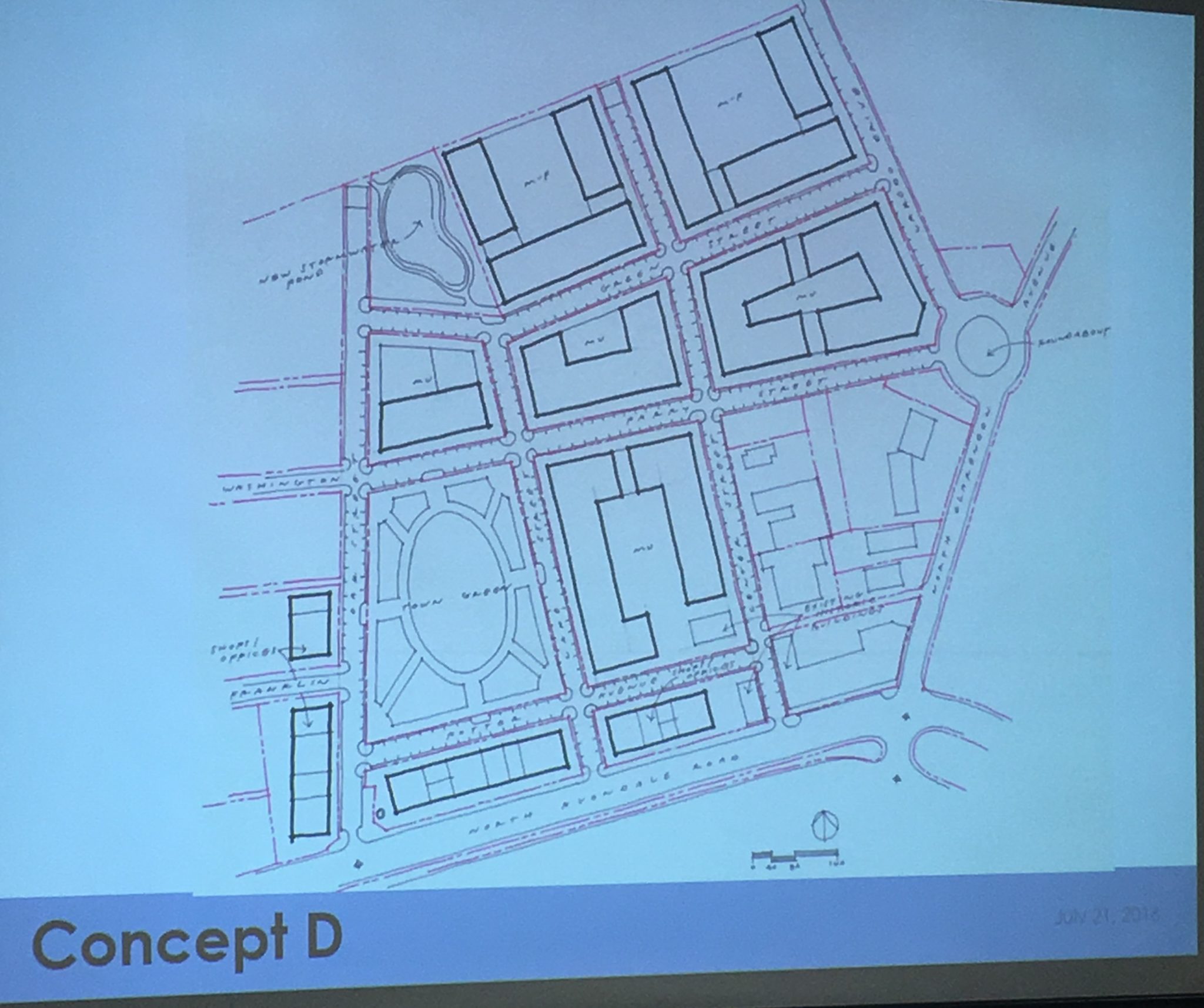