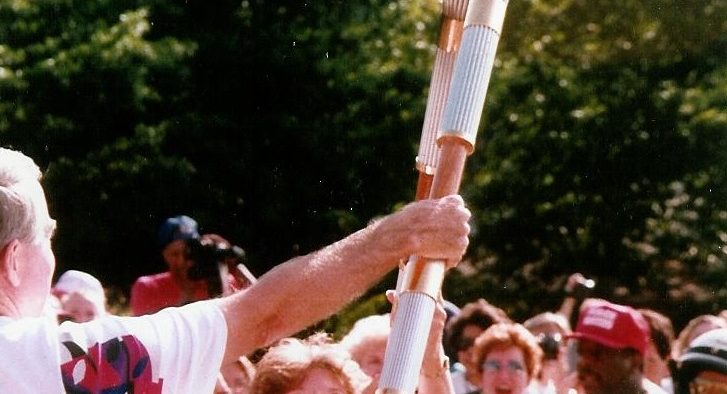 As the world gets ready for the 2016 Olympics, many Atlantans are observing the 20th anniversary of the 1996 Olympic Games.

One of the torchbearers was City Schools of Decatur Employee Denise Bauer Forrester. She sent in these photos and her remembrances from her moment as a torchbearer.

I’ve attached a picture of the Avondale/Decatur torchbearers that carried the Olympic Torch 20 years ago on July 18, 1996. 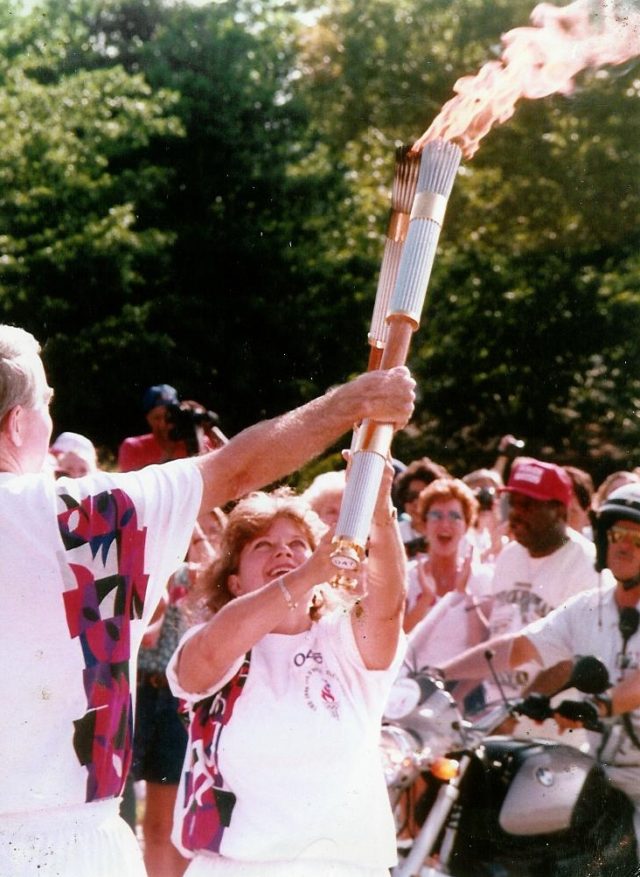 This group of torchbearers met at the Decatur’s Holiday Inn (now the Marriott) on Clairemont Road about 7 a.m. The van carried us to our drop-off places where we would be carrying the torch.

The relay started that day on top of Stone Mountain. They came to an unexpected detour in the road which made them behind schedule.

I was to start at 9:30 on Mountain Drive and carry it into the City limits of Avondale Estates on Covington Highway (North Avondale Rd.). They were already an hour behind when they got to me. I was the 46th torchbearer for that day. The relay ended in Piedmont Park that night about 11:30 p.m. The following day it started at Piedmont Park and went all through Atlanta until it ignited the flame on the Olympic Cauldron in Atlanta at the [then] new Turner Field. Denise Forrester and other torchbearers at the Decatur Gazebo

The first ceremony for the Olympic Torchbearers was at the Decatur’s gazebo beside the old courthouse. We were carried there in a van to be part of the ceremony. However, the van couldn’t make it because a lady fainted in the crowd and they had to call an ambulance. The relay stopped until this was over. We walked several blocks to the gazebo.

People were lined up 4-5 rows deep. There were large banners, flags, and patriotic signs throughout the parade route. People were singing, music was playing, helicopters were buzzing in the sky, children were laughing and crying, and dogs were barking.  In short, the air was filled with excitement and anticipation.

When the most exciting moment I had been waiting [on] for many months, finally arrived, chills and goose bumps went up my arm. “Sisssssss” went the sound from the torch as the escort turned the gas on. As I held the torch high, the flame roared to life. Car horns were blowing; flags were waving; the church bell was ringing; and children held up patriotic signs and posters. Every person had a smile on their face, and their eye on the torch. Everyone was cheering, clapping, crying and a few were just awe-struck by the event.

I had been teaching in the City of Decatur Schools for 22 years at that time. I saw many of my former and present Decatur students, co-workers, neighbors, relatives, cub scouts, my children’s friends, my family’s friends and church members lined up along the street.

I realized the power of this flame that had already traveled through 5 continents: a symbol of world peace, unity, and hope for the future. Decatur Torch Bearers in front of Holiday Inn before the run. 7-18-96