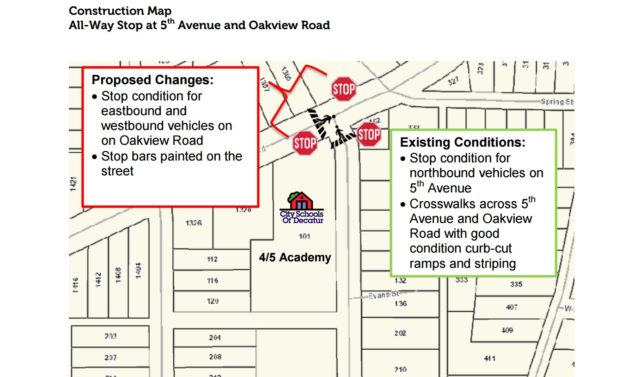 A map showing the location of a proposed all-way stop near the 4/5 Academy. Source: City of Decatur
Share 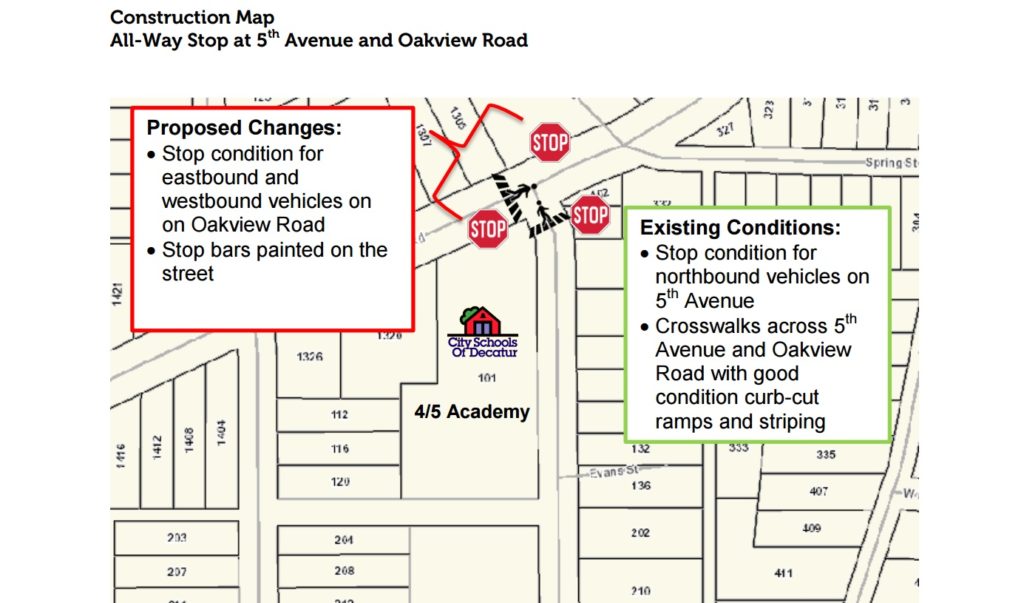 A map showing the location of a proposed all-way stop near the 4/5 Academy. Source: City of Decatur

During its regular meeting on July 18, the Decatur City Commission unanimously approved placing an all-way stop at the intersection of Fifth Avenue and Oakview Road.

According to a memo attached to the city commission’s meeting agenda, the school’s Leadership Team last October voted unanimously to support a resolution calling for the all-way stop.

The Decatur Police Department conducted a speed and volume study in May.

“The 85th percentile speed of vehicles traveling westbound on Oakview Road near the intersection with Fifth Avenue was 30 miles per hour,” the memo says. “This is in accordance with the posted speed limit, but could be hazardous given the proximity to the school. During a weekday, approximately 2,200-2,500 vehicles travel west through this area, with peak travel from 7 a.m. – 9 a.m. and 2 p.m.-7 p.m.”

A survey of FAVE parents found that 58 percent of the 39 respondents said safety at intersections were a factor in whether to let their child walk or bike alone to school.

In a letter to the City Commission, FAVE principal Karen Newton wrote the increased enrollment has led to an increase in traffic going to and from the school. In the 2011-2012 school year, FAVE had 522 students. In the upcoming school year, FAVE is expected to have 836 students, Newton’s letter says.

Editor’s note: This report was compiled by viewing the live stream of the July 18 Decatur City Commission meeting.