Decatur city official: No word on when Google Fiber will be available

Decatur city official: No word on when Google Fiber will be available Decatur City officials celebrate the news about Google Fiber. Lena Stevens is pictured in the center of this photo. File Photo by Dan Whisenhunt
Share 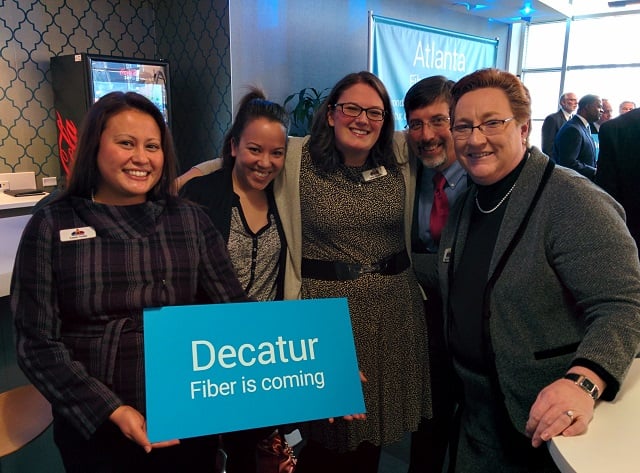 Google Fiber promises amazingly fast internet speeds, but the timeline for getting the service up and running is anything but fast.

Lena Stevens, a project manager for the city of Decatur who has been the city’s liaison with Google, told City Commissioners on July 18 that the company hasn’t committed to a launch date for the service.

“We are far from ready to have Google Fiber in our homes,” she said.

She said the Google Fiber Hut on off Atlanta Avenue “looks fantastic.” But that’s just one step in a multi-step process. Each hut serves about 20,000 homes, connecting them to Google’s gigabit broadband via fiber cables.

“They have to bring the fiber to the hut itself, then run the fiber to small cabinets then out to homes,” she said, adding, “We don’t have a timeline.”

She said she’s hopeful that there will be more information that can be released soon about the Fiber project. As Fiber, joined by its competitor AT&T and Comcast, gets up and running, the public can expect to see more work on the city’s sidewalks and streets.

“We are going to see more things like sidewalk panels removed, digging in the grass strips,” she said.  ” … We’re trying to dour best to get communication out to the public.”

Editor’s note: This report was compiled by viewing the live video stream of the July 18 City Commission meeting.