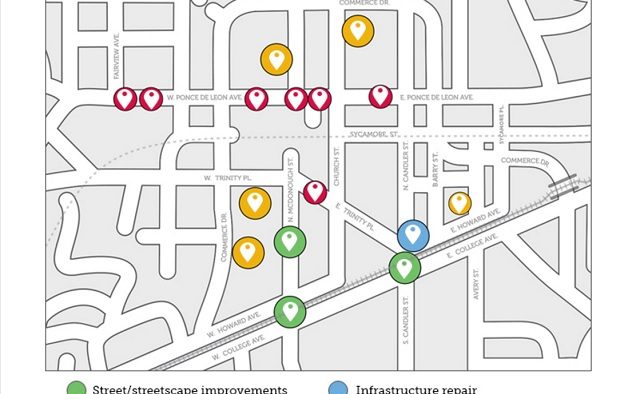 A map listing all the projects planned in downtown Decatur over the next couple of years. Source: http://www.decaturmakeover.com/
Share 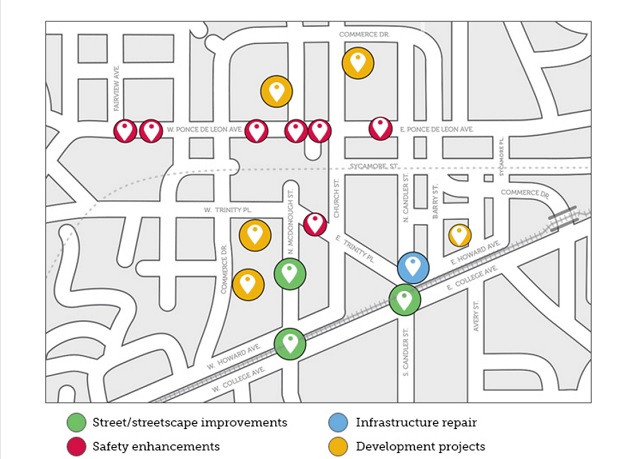 A map listing all the projects planned in downtown Decatur over the next couple of years. Source: http://www.decaturmakeover.com/

The next couple of years will be busy ones for downtown Decatur.

There will be streetscape projects, infrastructure repair, private development and more. Many of these projects will occur at the same time, creating disruptions and detours for residents.

“A lot of construction going on right in the heart of downtown Decatur,” Deputy City Manager Hugh Saxon told the City Commission at its July 18 meeting. “I think when we’re done it will improve things. Infrastructure is a difficult, messy, inconvenient process. We’re in for quite a bit of it over the next couple of years.”

The city has launched a new website, www.decaturmakeover.com, to help residents keep track of the changes.

Projects on the horizon include:

– Redevelopment of the Callaway Building into a mixed-use project

“It’s just a way to stay abreast of the changes that are taking place and hopefully minimize some of the inconvenience that’s going to be with us for the next couple of years,” Saxon said of the new site.

He also said there’s no certainty that the projects will be completed on time.

“You can’t make it go away,” Saxon said. “It’s very weather-dependent. You’re always running into things you didn’t know were there. If people know about it beforehand and stay informed, it helps people cope. That’s really what we’re after.”

Editor’s note: Portions of this report were compiled by viewing the live stream of the July 18 City Commission meeting.