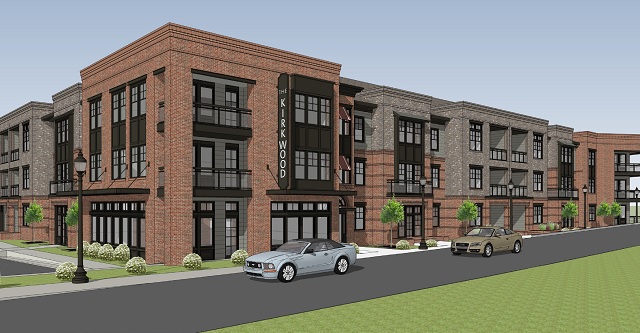 After months of waiting, developer Euramex has finally begun to move dirt around on the site that will eventually be home to more than 230 market rate apartments.

Atlanta’s City Council approved zoning for the property, located at 1910 Bixby Street, in November 2014. The developer knocked down the Bixby Street apartments that were built in the 1960’s and were notorious for some of the criminal activities that took place in and around it. The new project will be called The Kirkwood. There’s conflicting information about the number of apartments that will be developed on the site.

Dwell Design Studio published these renderings of the project on its website.

Geoff Mueller, President of the Kirkwood Neighbors’ Organization, said crews began working at the site about two weeks ago.

“It’s definitely been cleared and pending,” he said. “There’s no actual construction yet. But they’re still moving the dirt around.”

There was no new information regarding the average monthly rent at The Kirkwood. In 2014, company officials said the development would consist of one-bedroom apartments that will be available for $1,100 to $1,200 and two-bedrooms available for $1,500 to $1,600.

Euramex is also behind a proposed mixed-use development in Avondale Estates, which is still being negotiated with the city.