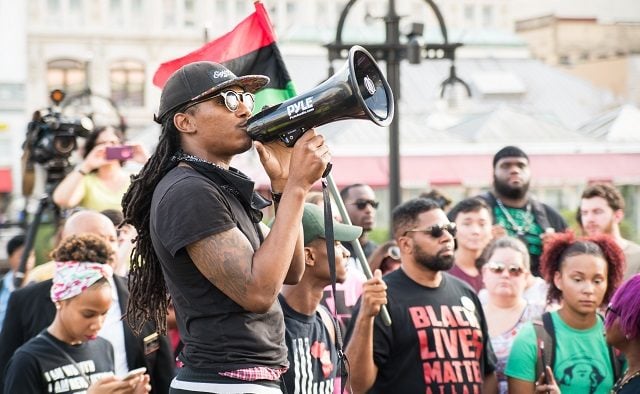 Photo of the July 7 protest in Atlanta by Steve Eberhardt.
Share 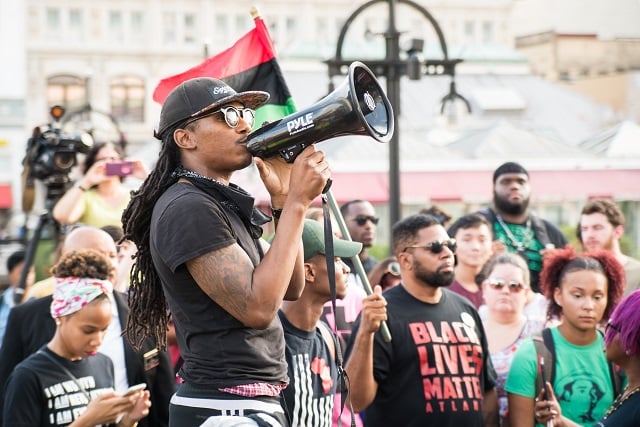 Photo of the July 7 protest in Atlanta by Steve Eberhardt.

After five days of protests, hundreds of signs demanding justice, and thousands of chanting voices, the streets of Atlanta have mostly returned to normal, filled with traffic. For some protesters, life has resumed a daily routine.

For the groups that helped organize and lead the protests, the week has been anything but quiet. Filled with meetings and planning sessions, they organized, prioritized objectives and decided how to best push for the change they want to see in Atlanta.

“There is such an amazing energy surrounding all of this, and now we want to take the opportunity to harness that energy,” said Asia Parks, who works with Rise Up Georgia.

The Atlanta protests, in response to the deaths of Alton Sterling and Philando Castile at the hands of police officers, were some of the largest in the country. More than 15,000 people marched in Downtown, Midtown and Buckhead over the five days. On July 11, the protesters marched to Governor Nathan Deal’s mansion. That night Mayor Kasim Reed met with protest leaders and agreed to meet with group leaders on Monday, July 18. Reed also called for a “cooling off” period. While protesters mostly respected that call, they also say they expect city leaders to make specific changes and address their concerns.

“We are tired of waiting, tired of writing letters, tired of being shot,” said Sir Maejor Page, president of Black Lives Matter of Greater Atlanta Inc. “No longer will we wait.”

It is not clear who will be at the meeting with Reed, but Page said it will be open to the public. During the protests, Rise Up Georgia, Black Lives Matter, the NAACP, Atlanta Black Students United, Southerners on New Ground, Malcolm X Grassroots Movement and Students for Justice in Palestine were some of the groups involved. Many of the same groups have been talking and strategizing in the days since the protests, Parks said. Rise Up Georgia also held an open meeting on July 14 to gather input from the public.

The national Black Lives Matter movement has put together a list called “Campaign Zero” with 10 objectives that includes things like ending broken windows policing, limiting the use of force, independent investigations, body cameras and community representation. Atlanta groups cite some of the same objectives, but they also provided objectives based on specific local incidents. Mayor Reed’s office declined to comment for this article, saying it would be premature to discuss objectives prior to meeting.

1. Create mental health units to respond when a police call involves someone who is having a mental health crisis. Groups cite the case of Anthony Hill, who was shot by a DeKalb County officer in March 2015. Hill was naked and appeared to be mentally ill at the time. According to Elizabeth Espy, director of public affairs for APD, Atlanta police officer are trained to deal with people with mental health issues and have a team of 4-5 officers dedicated to it.

2. Use police funds for crime prevention rather than spending it on initiatives like Operation Whiplash. In a press release on June 29, Reed announced The Gun Violence Reduction Task Force, also known as Operation Whiplash (http://www.atlantaga.gov/index.aspx?page=672&recordid=4576). The Task Force will consist of about 45 officers who will patrol targeted areas this summer and focus on gun-related crimes, according to the press release.  An additional 20 officers will help to gather intelligence and address community concerns.

3. Provide more police transparency when officers kill civilians. Protest groups cite two recent cases that were unresolved during the protests. On Friday, Fulton County District Attorney Paul Howard made announcements in both cases, according to the Atlanta Journal Constitution. No charges will be filed in the case of Alexia Christian, who was shot on April 30, 2015 after she was placed in the back of a police car. According to police, Christian got her hands on a weapon and started shooting. Howard provided some details to Christian’s family, but no video footage has been released, according the news article. In the second case, Atlanta police officer James Burns shot and killed Deravis Caine Rogers on June 22. APD fired Burns on July 1. Howard announced he would seek to indict Rogers on charges of felony murder, aggravated assault with a deadly weapon and violation of his oath of office, according to the Atlanta Journal Constitution. Before Howard’s announcement, Page had said he believes officers should be treated the same as civilians and charged without going through a lengthy investigative process.

4. Create a public database that provides information about citizen complaints against officers. Just as police can search for records about civilians, the public should be able to find out about an officer’s record by typing in a name and badge number, Page said. “It would not have to include all the details, but it should have the type of complaint,” Page said.

5. Create a meaningful citizen review board that has the authority to investigate and bring charges against officers. Page called the the Atlanta Citizen Review Board a “joke,” noting the board rarely recommends discipline for officers and has no power to make the police department follow their recommendations. According to information posted on the ACRB website, they reviewed 32 cases in 2015 (http://acrbgov.org/2016-complaints-reviewed/complaints-reviewed/). In eight of those cases, the ACRB found at least a portion of the complaint was warranted. However, APD rejected the findings or cited an open investigation in all eight cases.

6. Ensure all police officers wear body cameras. Earlier this year, an attempt to equip APD officers with cameras was put on hold when one of the camera manufacturers sued the police department. That lawsuit was dismissed in June. Espy said the ADP hopes to have all officers equipped with body cameras within a year, but did not provide specifics on when the process would begin.

While many of the groups meet with each other and have similar objectives, they do not speak with one voice or one goal. Page with Black Lives Matter Greater Atlanta is much more focused on fighting police brutality and working for change within the police department. Parks, with Rise Up Georgia, noted they are also including initiatives for affordable housing.

khalid kamau, one of the founders of Black Lives Matters in Atlanta, has recently become more involved with working in the Democratic Party and will attend the Democratic Convention as a Bernie Sanders delegate. As someone who now works inside the system to bring about change, kamau said he believes both aspects are important.

“We need to have someone sitting at the table to push for criminal justice reform and to keep the party honest,” he said. “We need the movements on the streets to advocate. Even when I am inside the room, I am texting people from Black Lives Matter and other groups, asking them what I should be advocating for.”

One thing all the groups agree on is that they will continue to fight for change, even if that means taking to the streets again. They disagreed with comments from Reed and civil rights leader Andrew Young questioning their motives and protest methods.

While addressing APD officers in a videotaped speech, Young called the protesters “unlovable little brats.” Young apologized later in the week during an interview with WSB, saying he never meant to offend the demonstrators.

In a public Facebook post on July 11, Reed seemed to question the methods of the protesters as they tried to block highways in Atlanta.

Reed wrote, “Over the last couple of days, I’ve noticed a number of posts on social media comparing the desire of Atlanta protesters to take over our downtown interstates with that of Civil Rights demonstrators marching over the Edmund Pettus Bridge in Selma, Alabama in March 1965…As I said last week, Dr. King would never take a freeway in the dangerous fashion that demonstrators in Atlanta this weekend tried to block our downtown interstate. To say or imply that these two events are similar is a classic example of a lie getting around the world before the truth wakes up.”

Reed also noted the weeks of planning behind the march in Selma.

When asked Wednesday if the mayor stood behind his criticism and what he would want protesters to change, Reed’s office simply referred to the Facebook post and said Reed had nothing else to add.

Amesha Patterson, with NAACP Atlanta Branch, said people need to understand not everyone will agree or do everything like previous civil rights leaders. Patterson said the NAACP would continue to support and organize protests.

kamua agreed, calling the demonstrators and protests “amazing.” He noted that Thurgood Marshall had disagreed with King’s methods during the civil rights era.

“The young people are always going to push the envelope,” he said.

People may think the protests were not organized, said Parks, with Rise Up Georgia, but their group has been working on these issues long before the protests began. They also trained people how to defuse interactions between police and demonstrators. They had about 20 marshals out every night to keep demonstrators on sidewalks and to step between the police and demonstrators when tensions got high. Whenever they spotted someone trying to agitate the crowd, they immediately tried to calm the situation.

The protests may have been disruptive, but getting killed by police officers is disruptive, several of the leaders noted. If this is what it takes to get people’s attention and to understand that change has to happen, they will continue to march in the streets.

Page said he has tried for the last five months to meet with Mayor Reed by going to his office and sending emails, but was not successful. Parks also said their group has tried schedule meetings with the mayor as well, but could not. The mayor’s office said Reed met with a Black Lives Matter group last year, but did not dispute Page and Parks’ statements.

“We beat down the doors and forced them to respond, and now we will hold them to a high standard,” Page said. “I’m very hopeful they will listen.”

Editor’s note: After this story was published, WABE published an article that called into question whether Sir Maejor Page is in fact the leader of Black Lives Matter of Greater Atlanta. This was how Page identified himself to Decaturish and other media outlets. Page contacted Decaturish and noted that Black Lives Matter of Greater Atlanta Inc. is incorporated with the Secretary of State’s Office and he is the only officer listed on the incorporation paperwork. The company was incorporated in March of this year. Based on the evidence, we believe it is accurate to identify him as president of this organization.