According to owner Linda Buice-Bailey, My Coffee Shop at East Lake, at 2462 Memorial Drive SE, is all about the customers.  As evidence, she points to several open-faced cabinets on the shop wall that bear the coffee cups of some of her regulars, each one personally decorated by its owner.

“We had a decorate-your-coffee-cup party when we opened in 2011,” said Buice-Bailey, “and our business has grown around that kind of personal customer experience.”

Among the dedicated regulars is Carlton Johnson, who commutes to East Lake from Lithonia, where he serves as associate pastor at the First African Presbyterian Church, to work on his laptop in a corner of the shop.  “It’s definitely worth the drive,” he said, as he took a break to talk to Decaturish. 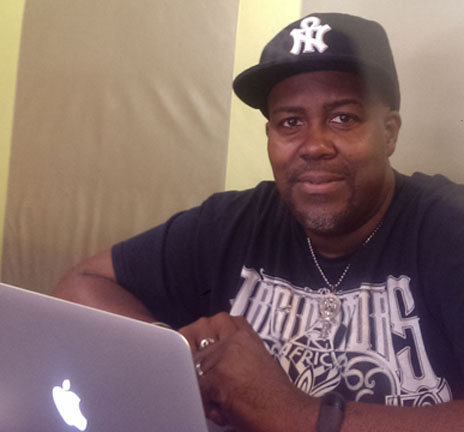 Carlton Johnson commutes from Lithonia to My Coffee Shop and says, “The drive is well worth it.”

He has worked in the business himself, managing a shop for one of the major chains.

On his second visit to My Coffee Shop, he sampled the biscuits.  The verdict?  “I saw heavenly bodies when I bit into that biscuit!” he said.

By a happy coincidence, Johnson’s church is in the coffee business too, having formed a partnership with a coffee-growers collective in Cameroon.

“A broad mix of people come here,” said Johnson, who also serves as administrative officer at the Johnson C. Smith Theological Seminary in Atlanta.  “You come in here to be who you are and do what you do.”

Also on hand the day Decaturish dropped by was Meta Mungo, a former Merrill-Lynch staffer, now in retirement, who serves as a financial development associate at the East Lake Family YMCA about ten minutes from the shop.

Mungo is an old-timer among the customers, having frequented the shop since it opened five years ago.

“It’s a hot spot for East Lake,” she said. She noted that the shop draws customers from among the faculty, staff and students of nearby Drew Charter School, as well as members of the Y, other nearby businesses, and neighborhood residents.

“The shop has a genuine community atmosphere,” Mungo said.  “It changes and grows along with the surrounding community – a real work-in-progress.”

The shop also caters to special markets and events. Past events include the Santa Christmas Breakfast at the YMCA and an onsite breakfast of fried chicken and waffles at the DeKalb Sheriff’s Office.

The shop also donates to the United Way a portion of the proceeds from its coffee kiosk hosted at the Manuel J. Maloof Center.

Astrid Prudent, an office worker, was having lunch with a coworker, and commented on the quality of the food and service.

“Everything is excellent,” she said, “but be sure to have the turkey burger.”

Buice-Bailey’s salmon croquettes also rate high with Prudent, who added, “And the breakfast is wonderful!”

The shop, which closes at 3 p.m., specializes in breakfast and lunch.

Breakfast is served at My Coffee Shop at East Lake. Photo obtained via https://www.facebook.com/mycoffeeshopel/

Breakfast, served all day, features the customary sausage gravy biscuits, eggs, omelets, and wheat or white toast, but also offers some specialties such as turkey sausage and banana-nut French toast. The lunch menu offers a range of sandwiches, as well as a chicken-and-spinach omelet and a total-veggie omelet, both served with regular- or cheese-grits and biscuits, along with a choice of white/wheat toast, on the side.

But the surprise hit of the shop is a smoothie Buice-Bailey created that includes generous helpings of basil.

The resulting green concoction, christened the Amazing Basil Lemonade, proved a hit with customers and staff, and now occupies a place of honor on the menu.  Buice-Bailey likes to point out the health benefits of the smoothie as well, derived from the herbal addition to the mix.

Buice-Bailey came to My Coffee Shop from a career in the construction industry, and she still works in that field, along with her husband Otis, who can often be found tending to the business on his laptop in a more secluded corner of the shop.

Asked about the lessons she has learned from her successful venture into the worlds of caffeine and its assorted sides, Buice-Bailey said, “Good help is the key to everything.”

Today the shop employs four cooks, two dishwashers, and two counter staff. Daughter Ciji and son Dwayne also pitch in from time to time, on the counter and in the kitchen.

“Work out your finances at the beginning,” Buice-Bailey said, “and then hire good people.  Without good people to give excellent service, the business is nothing.”