Sutton and Bradshaw square off again before July 26 vote

Sutton and Bradshaw square off again before July 26 vote 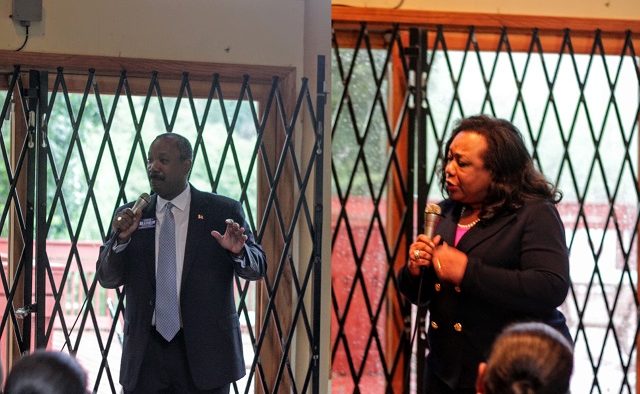 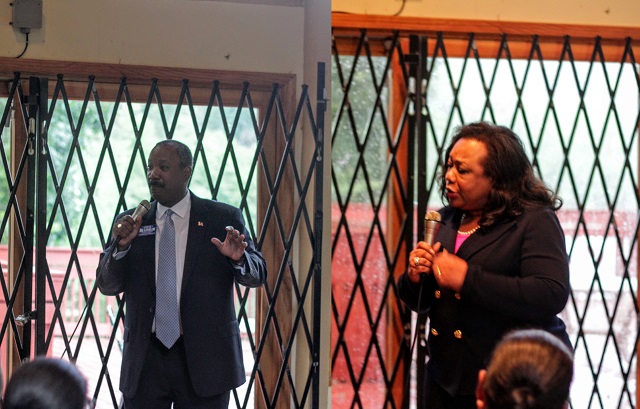 The goal of the meeting was to provide homeowners an opportunity to interface with the candidates. More than 50 Dekalb residents braved the torrential thunderstorm to engage Sutton, Bradshaw and other candidates: Tax Commissioner Irvin Johnson, challenger Susannah Scott, and District 7 Commission candidates Diane Daniels Adoma and Gregory Adams.

The “Forum (Debate)” is the latest matchup between Sutton and Bradshaw in anticipation of the runoff vote on July 26. The previous debates were notable for crowd hostility towards Sutton, whose time in office has been plagued by scandal. She got the same reception at the July 19 debate.

During opening remarks, Bradshaw continued to emphasize his past as a military leader and businessman. He said he, “could have gone anywhere in the nation after retiring from the military, but chose Dekalb County.”

Sutton used her time to address ethical questions voters have raised during her tenure in office.

“I don’t believe anybody elected me to get along with someone… You can’t run against me on my record and defeat me,” she told the audience. “It has to be about made up stuff. Because my record shows I work for you.”

According to Sutton, Johnson initially supported her campaign, lending his voice for an automated phone call in which voters were erroneously told that Steve Bradshaw voted for John McCain instead of Barack Obama (Bradshaw voted for McCain in the 2000 GOP primary). Sutton defended this call as an innocent mistake, emphasizing that Johnson issued a correction.

Bradshaw disagreed with Sutton’s assessment, calling it “a lie,” and crediting Johnson for correcting his erroneous robocall. “He called me the next day, apologized profusely, and said, ‘I want to make this right.’”

Bradshaw said Johnson contributed to his campaign and retracted his previous endorsement of Sutton, a point that Sutton loudly contested for the remainder of Bradshaw’s answer.

Things got tenser as Sutton fielded a question about attracting businesses to Dekalb. The incumbent accused people in the audience of engaging in character assassination.

“None of this answered my question,” a visibly frustrated homeowner shouted back.

A moderator took the microphone from Sutton, who continued defending her answer as she returned to her seat.

While residents had been instructed to keep their questions general enough for all candidates to answer, targeted questions for Sutton continued.

A Dekalb County resident asked the commissioner to comment on recent reports that $70 million in county funds had recently gone missing.

“If somebody turned in an expense report without receipts in the private sector, they would be fired,” the resident said.

Sutton denied the premise of the question.

“This is all fabricated to make a news story… I deny the question,” She said. Sutton called the questioner and local media, “disgraceful.”

Bradshaw said the solution to determining the truth of claims is a full-forensic audit of county budgeting, a suggestion Sutton said was “expensive”.

The most heated moment of the night concerned Sutton’s lawsuit against the county’s Ethics Board. A resident affiliated with Georgia Watchdogs asked Sutton about it.

“Last year, Dekalb County voters voted over 90 percent in favor of our current Ethics Board… One candidate has filed a lawsuit to stop that ethics board,” the resident asked. “So is the board important or not? This same candidate spent tens of thousands of dollars on image consulting out of her taxpayer-funded office budget, paying it to a person she was having a personal relationship with. Is this appropriate?”

Moderators scrambled to take the microphone from the resident, reiterating the forum’s embargo on personal questions. Crowd members argued that the question had policy implications.

Sutton responded passionately, pointing at the questioner and accusing him of dishonesty.

She said it took courage to sue the “unconstitutional” Ethics Board. She compared her role as a Commissioner to the United States Supreme Court. Soon the debate broke down into all-out shouting.

“I have the courage to call you a liar,” Sutton screamed repeatedly at the forum attendee, before elaborating. “I never paid for image consulting. The services I hired were all for accounting purposes. I hired people to do things like writing, attend meetings, budgeting. People who are highly qualified and individuals with degrees.”

Sutton went on to call the Ethics Board in question “pawns used for political purposes.” She said the board was made up of “certain kinds of people” who judge “people who don’t look like them.” She implied that the board is a tool of institutionalized racism and finished her comments by comparing herself to Malcom X.

Bradshaw’s answer to the question was shorter. As Sutton supporters attempted to talk over him, the challenger said more than 90 percent of voters supported overhauling the Ethics Board.

“It went to a referendum and it passed with 92 percent of the vote,” Bradshaw said. “What has ever passed with that kind of number? The people sent a clear message that they want something different.”