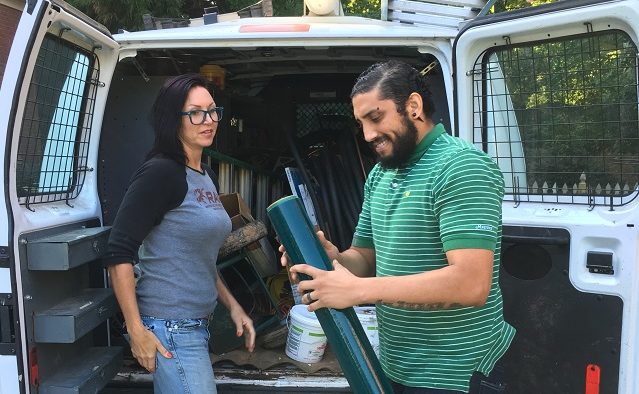 Jennifer Beato, and her employee, JC, stand outside her van while working a job in Norcross. Photo by Mary Margaret Stewart
Share

But when her husband unexpectedly died, Beato had to step up and learn the business. She worked with an employee her husband hired for a while, before finding a friend who taught her the trade.

On Wednesday morning, she and her employee JC installed a furnace in Norcross. They gathered tools from the company van and climbed into the attic.

You might’ve seen Beato and JC driving down Ponce de Leon Avenue or parked in your neighbor’s driveway but didn’t realize it.

“I was going to put the logo on the side of my van, but I got so busy,” Beato said. “I was just thinking that if anybody else calls me, I’m going to go crazy, so I put it off.

Beato is currently looking for another employee.

“Hopefully I will kind of get my employment portion of this set so that I’m not afraid to advertise,” she said.

After covering the staircase carpet of the Norcross home with a green plastic film for protection, Beato and JC had three hours of work ahead of them. Attics get hot quickly, though, so time was of the essence. They unscrewed, de-caulked and cut the old furnace out.

A typical day for Beato can consist of up to 10 service calls, depending on whether larger projects are interweaved into her schedule. Still, no day is the same, an aspect of her job that Beato appreciates.

With the success of her business and a home near Decatur, she’s happy to concentrate her work in town. Working farther out in places like Norcross is atypical, she said.

“I don’t do jobs farther out much anymore because as I’ve gotten busier,” she said. “It’s become, you know, anti-productive for me to have to drive half an hour to 45 minutes to get to a job, especially with Atlanta traffic.”

In this case, she was doing a favor for a regular customer.

“I still get referrals. This family [in Norcross] is the sister of another customer I have, so I came out,” she said. “It’s not that far, but I’ve been trying to take less and less work out here.”

Since it’s just Beato and one permanent employee, JC, who’s worked with her for almost a month, having the ability to choose where to work makes things easier to juggle.

Beato works on every job site, but with booming business, she senses change for RAM’s future.

“Having me on every job won’t be possible anymore. A little bit of a transition is relinquishing control, too. Trusting other people,” she said. “That’s the thing – finding people who you can trust to do what you would do yourself.”

Beato ran an ad in February, trying to find another employee, but no one panned out.

Still, Beato said that she doesn’t mind hiring someone that doesn’t have experience who’s willing to learn.

“JC has some experience in installs, but he doesn’t have any experience in service. He’s interested in learning, and he’s a hard worker and everything so I can work with that,” she said. “Of course it’s ideal to have an employee that you can just say, ‘Hey, go do this,’ and they know exactly what they’re doing and how to take care of it, but it’s harder to find.”

While she continues to wrestle with hiring more employees, her customers aren’t waiting around. In her own words, “life goes on, so keep marching forward.”

All in all, though, Beato is grateful for the success of RAM.

“You know, I’ve had a really good reaction from the standpoint of it being a woman-owned business,” she said. “It’s a trade that most people haven’t seen a woman in, so most people are very receptive to it.”