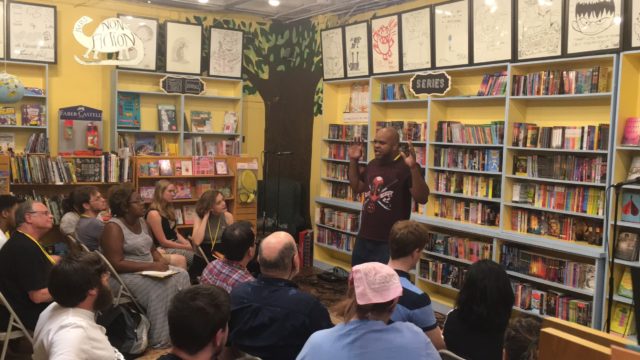 Zack Linly performs his poem “Target” at Little Shop of Stories in downtown Decatur, during the National Poetry Slam. Photo by David Schick

“The points are not the point; the point is poetry.”

You’ll often hear this quote, or some rendition of it, when you attend a National Poetry Slam. Before each bout, a small blurb on the origins of the slam and what it’s all about are said into the microphone. And constant reminders that while it is a competition, it’s the poetry that’s important.

If you saw throngs of people wearing lanyards with conference-style badges, walking the streets in and around Decatur Square last week, then you were in the midst of some of the most talented wordsmiths across the country here for the National Poetry Slam.

This year was the first year NPS was held in Atlanta, and had two local teams—Art Amok and Java Monkey—competing. The competition was fierce, but Art Amok made it to the semi-finals and placed sixth out of 72 teams from various cities. Java Monkey also had a close run, missing semi-finals by just four ranks—ultimately placed 24th.

“Art Amok Slam team represented our city in the most visible way by making it to semi-finals, slugging it out with teams we love from Boston, Chicago, Seattle, and more.” Karen Garrabrant, Art Amok slam team master, said. “We led our semi-finals bout for three rounds.” She added Slammaggedon, a Baltimore team, “came through in the 4th round with an amazing poet,” who had an excellent piece that “earned them final stage by a mere point seven over Art Amok.”

Java Monkey Slam Master Ashlee Haze, said she’s “really proud” of their ranking. “We missed semi-finals by 4 slots, that’s no small feat in my eyes. My team put up good work and that’s what matters most.”

Daryl Funn, the event organizer, said his main focus was on making the poets happy and “that they get a better experience or a different experience than they got at any of the other nationals. And they did.”

The DeKalb County Public Library, Little Shop of Stories, Java Monkey, and the Decatur School of Ballet helped to host the preliminary to semi-final competitions. Final stage was at the Georgia World Congress Center on Aug. 6.

“I think Decatur did really well in terms of making things easy for poets,” Garrabrant said. “The square is home to a variety of venues, restaurants and bars with some of the best food in the region in all price ranges.”

She said a consistent compliment the organizers received was about the walkability of the hotel and venues. She also praised the host hotel, the Courtyard Marriot, as very kind and interested.

What is ‘poetry slam’?

Sam Fuller, a first-time NPS poet from San Antonio Texas, said he got hooked on poetry slam after his friends invited him to a slam. “They said come on down and see what it’s about,” he said. He had already enjoyed writing lyrics to songs, he said, and drew inspiration from his lyrics to adapt as slam poems.

“The poetry slam is a place where people get together and are sharing poetry,” he said. “The greatest power a poet has is to be powerless over the poet’s demands and just let it come through, and this is a place where you can see that in full effect. People are just spilling their guts on stage, letting the deepest darkest parts of themselves out.”

Eda Kemper, a volunteer and poet from Seattle, said, “The National Poetry Slam to me is 72 teams from across the country, all different cities—some of them the same—and Canada come together and compete … This is performance poetry written from the heart … A lot of it is doing the poem, not necessarily winning. And I think that’s great.”

Allie Reynolds, first-time NPS poet from Michigan, said she sees NPS as an opportunity for everyone to listen to people articulate all the thoughts and feelings that they’re feeling and thinking, but might not be able to find the words themselves. “It feels like finding a group of people who understands,” she said holding back some tears of joy. “And that is the kind of the best feeling in the world.”