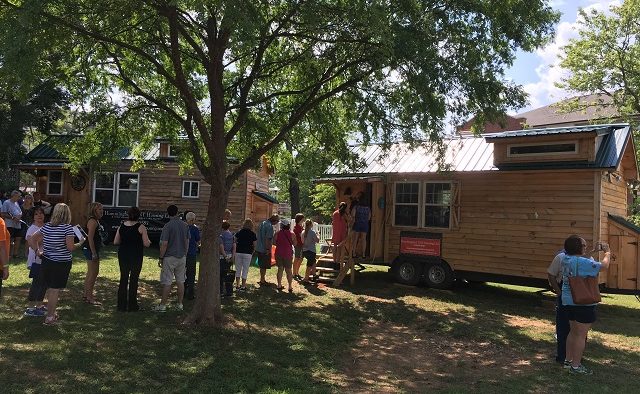 Thousands of people toured tiny homes at the Tiny House Festival in Decatur in 2016. Photo by Mary Margaret Stewart
Share 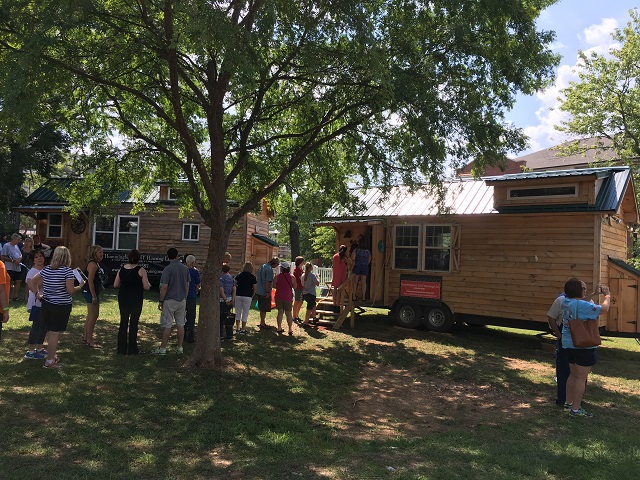 Decatur saw a big turn out this weekend for a festival celebrating tiny houses.

By 11 a.m. on Saturday morning, July 30, the first day of the two-day Decatur Tiny House Festival, a line of people wound around the fenced-in grass lot on the corner of West Trinity Place and Commerce Drive. Thousands of people participated in the event, which taught attendees about living large in a small space.

Parking for festival-goers was available in the lot adjacent to Decatur High School’s football stadium, which filled up in less than an hour. Food trucks lined half of the perimeter of the festival’s fence. Among the lunch vendors, a King of Pops umbrella, Bruster’s truck and lemonade stand stood ready to cool off customers standing in line.

Standing in the long lines to tour the tiny houses was bearable, but mostly because of the promise of novelty – and air conditioning – after the wait. Tiny Homes are legal in Decatur and can be as small as a few hundred square feet. Tiny houses were made legal in Decatur in 2014, when the Unified Development Ordinance was adopted by the City Commission. The concept is one of the city’s strategies to promote housing affordability within the city limits.

Tom Ryals greeted people as they entered one of the homes on display at the festival. He’s in the tiny house business full-time, building homes for four years now.

His wife Denise, who has a company called Hummingbird Tiny Houses, introduced him to the concept of a miniature home.

“She was on the phone with her sister that lives in St. Petersburg Florida, and they had a website pulled up from Tumbleweed Tiny Homes. I looked at it and I said, ‘I could build that, no problem,’” Ryals said. “So I sat down and one thing led to another, and guess what? We live in one right now with three dogs and two cats.”

A scene from the Tiny House Festival in Decatur. Photo by Mary Margaret Stewart

Part of the festival included “Tiny Talks,” which was a series of guest speakers who talked about a variety of topics related to tiny houses. The talks filled up quickly, though, reaching capacity and causing some frustration among some festival attendees.

Still, Debra Furtado, local Decaturite, member on Decatur’s Lifelong Community Advisory Board and volunteer at the Tiny House Festival, believes that the turnout by community members was amazing. She’s a firm believer that downsizing is important, especially in Decatur.

Furtado has noticed a “culture change” within the United States.

“It used to be the big mansions, and now everyone’s going smaller,” she said. “My daughter said that she and her boyfriend would love to have a tiny house, but it’s fascinating to me that it’s intergenerational. I mean, today’s generation and older generations are seeing how they can go smaller, and that’s so cool.”

While Furtado’s current house is on the smaller side, she said that she’d be interested in living in a tiny home.

“I already have a tiny house, kind of. My house is 1500 square feet,” Furtado said. “I think that smaller or less is better, and Americans are probably catching up to Europeans.” 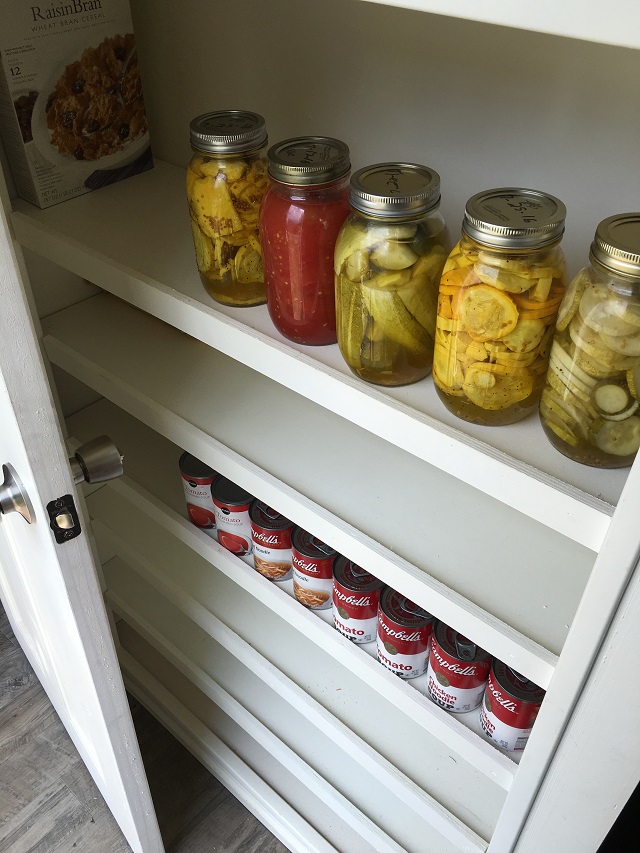