Decatur School Board members inspired to do more after dyslexia discussion

Decatur School Board members inspired to do more after dyslexia discussion 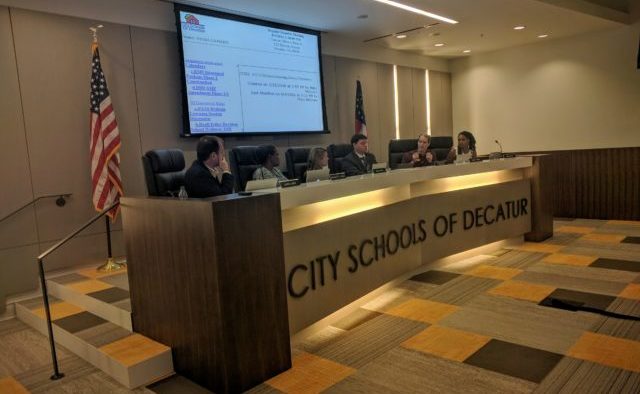 The Decatur School Board has a discussion during its Aug. 9, 2016 regular meeting. Photo by Dan Whisenhunt
Share 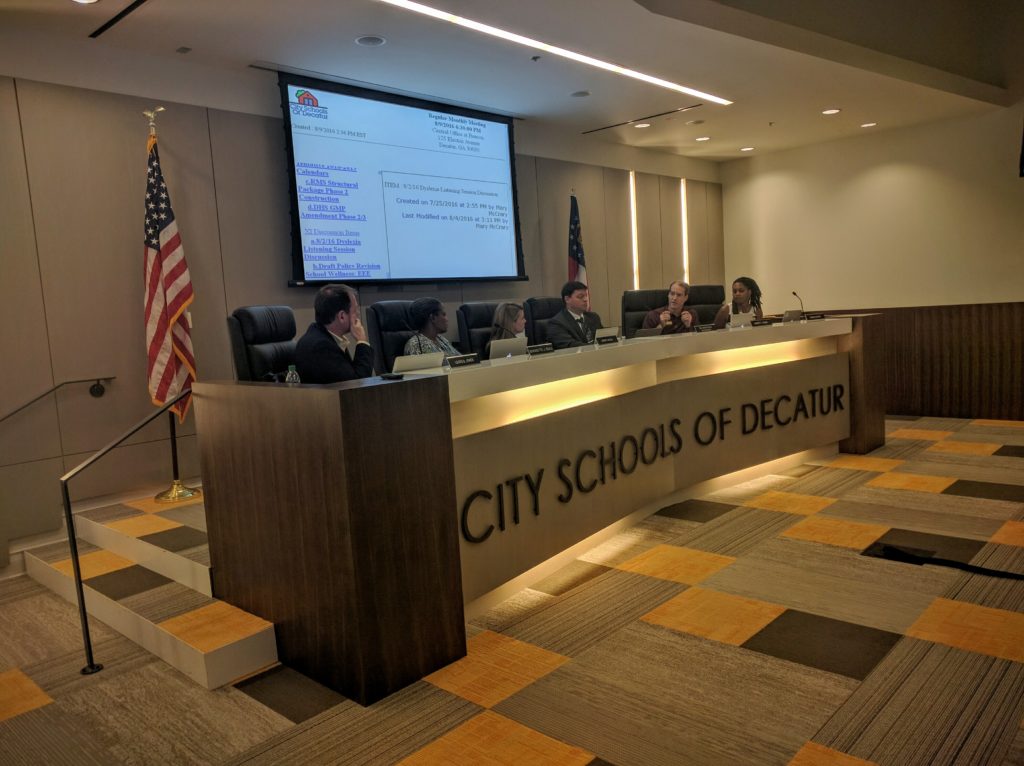 The Decatur School Board has a discussion during its Aug. 9, 2016 regular meeting. Photo by Dan Whisenhunt

The Decatur School Board was clearly moved by what they heard during an Aug. 2 work session about the struggles of dyslexic students attending City Schools of Decatur.

The Decatur School Board officially held a discussion about the work session at its regular meeting on Aug. 9. Parents of dyslexic students were also in attendance at the regular meeting.

Superintendent David Dude has pledged to explore ways that CSD can better serve these students. The Aug. 2 work session drew an overflow crowd, but Dude isn’t sure how many students in CSD have dyslexia. The national average is about 20 percent of students, meaning as many as 1,000 CSD students could be affected.

Parents who spoke to Decaturish recently said they’ve encountered resistance from CSD officials over the issue of how to best reach dyslexic students.

The Aug. 2 work session was tough one, School Board Member Tasha White said.

“I was emotionally and mentally exhausted, as I should have been,” she said. “There were a lot of overwhelming things. Where my heart really leans is for the families who can not do the extra, who cannot afford the private this and the private that.”

“I thought it was a great discussion that was long overdue,” School Board member Lewis Jones said. “I appreciate the overwhelming turnout. I appreciate the tenor of the comments. I also appreciate the response. The one message is you guys were heard loud and clear, both on the board and the superintendent. You made an impression.”

Caiola urged the school system to do whatever it can to help these students while the superintendent and his staff come up with a longer-term strategy.

“I don’t believe that teachers should wait for a psychologist to make a diagnosis,” Caiola said. “I believe that if you see something, you should say something. Whether or not a teacher is capable of diagnosing someone … is in my opinion irrelevant. If a teacher sees that a student is struggling with reading or writing, if they suspect it’s dyslexia, or they suspect it’s something else or they don’t know what the heck it is, they should say something.”

She later added that the discussion was not meant as an “attack” on teachers and staff.

“I don’t at all feel like this is an indictment on our teachers and staff,” she said. “I feel like they are trying and working very hard and we need to feel like we are giving them what they need to do their work.”

One parent of a dyslexic student, who asked to only be identified as Julia, said her daughter was diagnosed with dyslexia after she struggled to read and write. She immediately sought outside help for her daughter after hearing from other parents in CSD who said the system was slow to respond to their concerns. Following the School Board’s discussion during the Aug. 9 meeting, she said she was heartened by what board members had to say.

“Overall I was very, very encouraged,” she said. “I think all the board members are serious about looking into this and taking some action.”