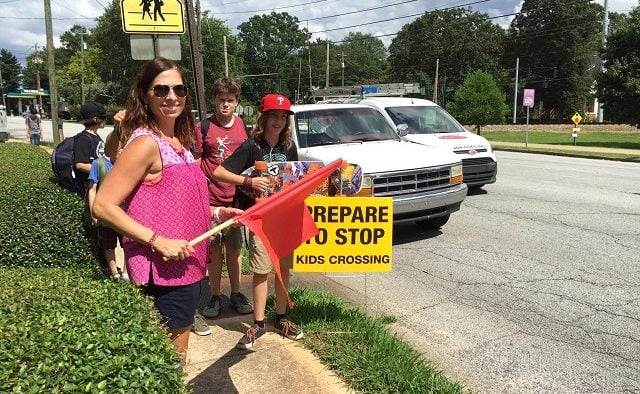 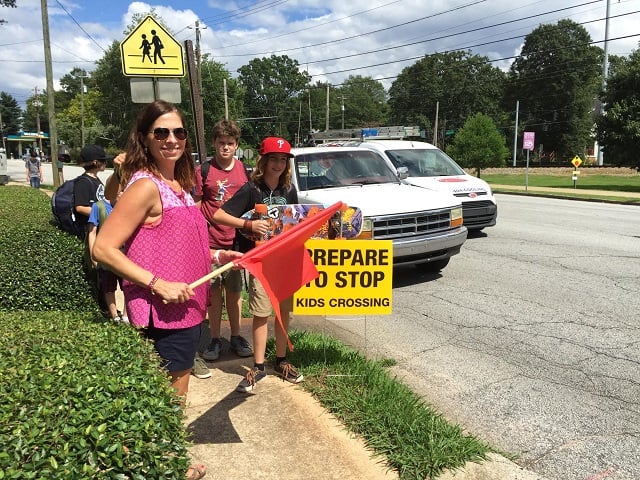 Amy Widener waving the red flag at the corner of Adair St. and W. Howard Ave. Photo provided to Decaturish

UPDATE: The man who took the signs has come forward and agreed to pay for them. For more information click here.

A group of Decatur parents decided to increase awareness about pedestrian safety along Howard and College avenues.

They placed yellow signs along these roads with messages like “Prepare to Stop, Kids Crossing.” They also installed red crossing flags for pedestrians to use.

But one local cyclist began pulling up the yellow signs according to one of the organizers, Amy Morris.

“He refused to hand them over and discuss any issues for a solution,” Morriss said. “He rode off with 10 signs towards city of Atlanta and said he does this all the time.”

The cyclist complained that the signs are “trash and a nuisance,” Morris said.

“This is frustrating,” she said. “People are very upset.”

She said police were called but were unable to intervene. Decaturish is attempting to identify the cyclist and contact him for comment.

Morriss and Becky Payne said they installed the signs and crosswalk flags as a temporary solution while they work with the city to address conditions along Howard and College avenues.

“The [flags and signs] were an attempt to bring visibility to the many pedestrians on these major roads while we wait for solutions that take longer to work through,” Payne said. “The flags are there should people crossing want a little more visibility than just the walk signals add they cross these major state roads. There is sunrise glare in the morning and general difficulty seeing the crosswalks for what they are on Howard.”

Payne said she did alert city officials and city staff about their plans to place the signs and flags.

“The city was instrumental in making sure code enforcement knew the signs were going up and should not be removed,” Payne said.

Payne said she was inspired to act because she often sees potential accidents on these routes.

“I live on Olympic and watch near misses every single day,” she said. “It was really the combo of children hit by cars last year, and then observing horrifying things after school as Renfroe was released one day when I was picking up my son for an appointment. That spurred my personal involvement.”