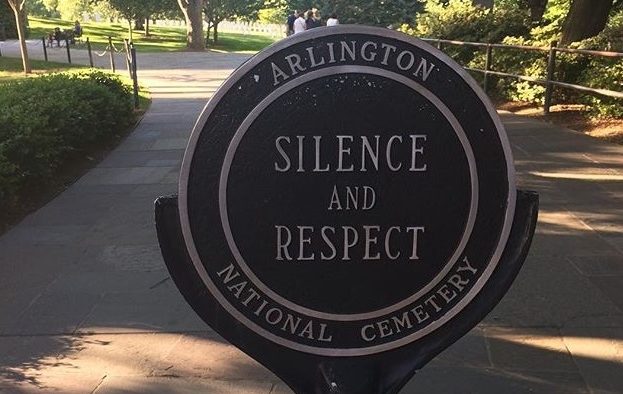 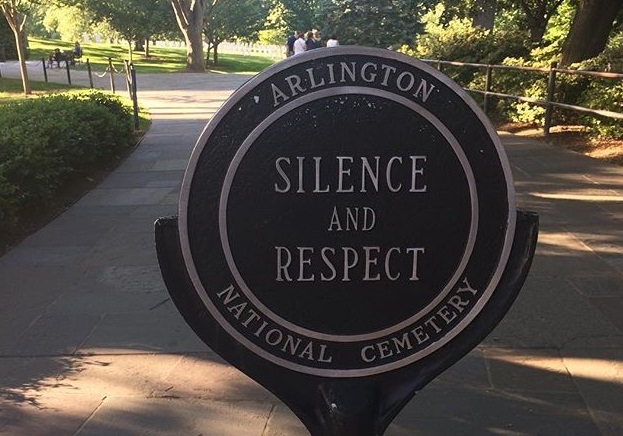 The first time I visited Arlington National Cemetery, I was 12 years old. I’d never been in a cemetery before. I’d driven past plenty of graveyards. I knew to hold my breath. There is no way to hold your breath in Arlington. I walked into that vast cemetery feeling hesitant and counting tombstones.

My teacher said that the soldiers had died for us. For me. We were on the 7th grade field trip all the way from Stone Mountain, Georgia to big beautiful Washington, D.C. It was the first time I was away from my parents. I looked at the graves, and I wondered if I was worth dying for.

I’ve been back to Arlington many times over the years. It’s one of my favorite places. It’s why I’m not afraid of cemeteries. Why fear death when both living and dying means sacrifice? I inhale when I enter the gates. I breathe deeply for all the times I held it as a child. The ghosts can’t take my soul from me. If they really died for me I have nothing to fear.

On one of the hottest days in D.C. this summer, I took my children to Arlington. Signs throughout the cemetery said “Silence and Respect.” My kids are familiar enough with cemeteries to know what that meant. I have walked them through graveyards from their earliest days. They’ve seen me cry next to my father’s coffin. They know death better than I did at that age.

It was the end of the day, and my kids were tired. They walked reluctantly. There was little shade even though the sun was setting. They walked quietly.

We climbed the first hill toward the gravesite of President John F. Kennedy.

“How did he die?” My daughter asked.

It would be easier to say cancer or an accident. We were in a military cemetery. I didn’t say anything about freedom. In order to say freedom you have to say murdered and killed and assassinated. We looked at other graves.

“These people died trying to end the Holocaust.” My daughter understands this, but doesn’t understand when I say it could happen again.

These soldiers died for us, my teacher said. I am 30 years older. I no longer wonder if I am worthy. These days I wonder about different things.

If these soldiers in the ground knew it was me, specifically me, with all my mistakes and anger and my questions and doubts and disappointments and optimism, would they still pick up a gun and lay in a trench and lay down their life for me?

How can this place of tombs and names and dates of death and birth be one of my favorites in the world?

I am often in airports. I see women and men in military attire when I travel. People show their appreciation.

“Thank you for your service,” I hear people say when they see someone in uniform.

One time I saw a woman in her desert camo gear. Her pack looked heavier than my suitcase. She carried it on her back. I imagined that someone was missing her. You can tell by the eyes if someone is leaving home or returning. The “thank yous” made her smile, awkwardly like she appreciated the praise, but not the attention. When our eyes met I realized that she was leaving. Goodbye stays in your eyes for a long time.

Another time, I saw a Bubba. They are drawn to me. He was tall, beanpole thin, maybe 19 years old. His jeans were skinny, but purposely sagging. He wore red Nikes. He looked like a country boy dressing for the city. I can tell a Southern man from mile away. It’s in the eyes like a goodbye.

A lady asked him about his service in the military. He said, “Yes ma’am, active army.”

She thanked him for his service. Several people smiled at him. But I could see that he was stalling as we boarded the plane.

I insisted that he go in front of me. I’ve come to realize that I am good at conversations with strangers. I know things about people if I look closely. He was returning home.

“You fly all the time?” he asked me in a soft voice. I told him yes. And asked the same of him.

“My first time ever,” he whispered like he was speaking of his virginity. He bent near me as he spoke. He’d been to training and was on active duty, but he’d never left the country and never been on an airplane.

“What should I expect?” he asked.

“Do you like roller coasters?” I said, “Well, it is a lot less exciting than that.”

He was heading home to Valdosta. He asked, “How do I find my seat?”

This is who might die for you. How long would this kid be so sweet and delicate? I’d almost forgotten he was a grown man trained to fight, to kill, to die. For me.

“10E will be on the left at the window. Great seat. Good luck,” I said and nodded goodbye.

Instead he thanked me.