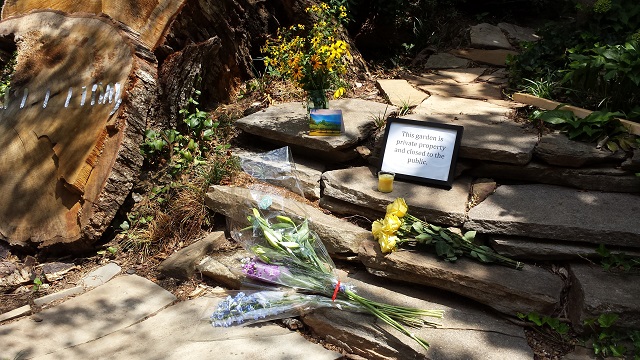 There’s been an outpouring of grief from friends and admirers of Ryan Gainey, a world-famous garden designer who died unexpectedly in a fire on July 29.

Friends and admirers have been placing flowers on the steps of Gainey’s home on Emerson Avenue in Decatur.

Gainey, 72, died trying to save his Jack Russell terriers at from a fire at his second home in Lexington, Ga. The dogs did not survive.

According to the official report from the Oglethorpe County Sheriff’s Office, deputies arrived on the scene within three minutes but were unable to access the inside of the house. The fire was contained in less than an hour but could not be extinguished until the power was cut off. The coroner said the cause of death was most likely smoke inhalation.

The owner of the Goodness Grows nursery and Garden Center in Lexington, who considered Gainey a friend, provided additional details about the incident in a Facebook post.

“Ryan Gainey was in his kitchen cooking, and something caught fire. The flames spread quickly. Ryan ran out the back door of his house, grabbed a water hose, and hurried back into the conflagration to rescue his Jack Russell terriers, Leo, Jelly Bean, and Baby Ruth,” the post says. “Sadly, today, Ryan, his beloved dogs, and his treasure-filled house are no more.”

Memorial and funeral arrangements have not been announced.