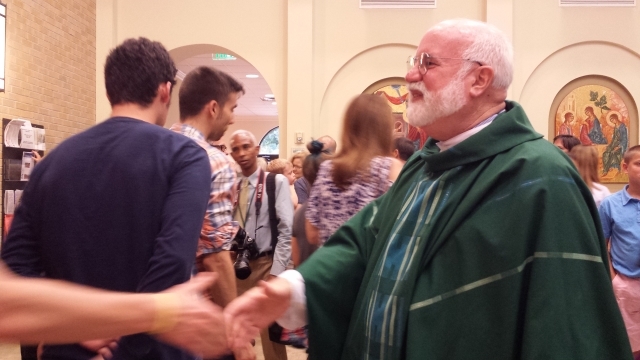 A California priest, known nationally for his work with gangs in the poorest Catholic parish in Los Angeles, spoke at a Decatur church Sunday night.

Father Greg Boyle, a Jesuit priest and author of “Tattoos on the Heart,” told funny and inspiring stories to a large crowd in the school cafeteria at St. Thomas More Catholic Church.

Fr. Boyle brought with him Michael Jenkins, a former gang member who has been working at Homeboy Industries. Fr. Boyle created the organization in 1988 with the Dolores Mission Church to provide jobs and training for gang members.

“It’s the privilege of my life to have worked with gang members for 30 years – at Homeboy Industries for 28 of those years,” Boyle said.

Homeboy Industries’ first enterprise was Homeboy Bakery. A Hollywood producer donated funds to turn a warehouse into a bakery in 1992, and soon former rival gang members were working together to bake bread. Other businesses added over the years include silkscreen and embroidery, a diner at city hall, a catering business, and a restaurant called Homegirl Café, which hires women formerly involved with gangs.

The Homeboy Industries website says the organization “is recognized as the largest and most successful gang intervention and re-entry program in the world, and has become a national model.”

Boyle talked about the programs, but he also had the audience in laughter for much of his presentation.

He recounted presiding over a service of 500 kids at San Fernando’s juvenile hall.

“I had a little sheet that has the readings on it, and I thought, ‘I’m going to close my eyes and listen to the homies proclaim the word.’ And this guy got up … and with an overabundance of confidence, he said, ‘The Lord is exhausted!’

“And I remember thinking at the time, ‘wow, that’s way better.’ I’d much rather have an exhausted God than one who’s distant and high up there. A God who exhausts himself in loving us. That’s not bad!”

Boyle’s entertaining stories were sprinkled with theology, and he kept returning to the theme of kinship.

“We’re all called to create a community of kinship such that God in fact might recognize it,” Boyle said. “Mother Teresa diagnosed the world’s ills correctly, I think, when she suggested that the problem in the world is that we’ve just forgotten that we belong to each other. How do we stand against forgetting that? And that’s why I think you’re here tonight.”

Jenkins spoke to the audience about how his desire for kinship led to him joining a gang in L.A. He said he was born addicted to cocaine because his mother was an addict. As he described going into at least 12 different foster homes he said, “I had so much anger and resentment. I wanted to know why nobody loved me.” 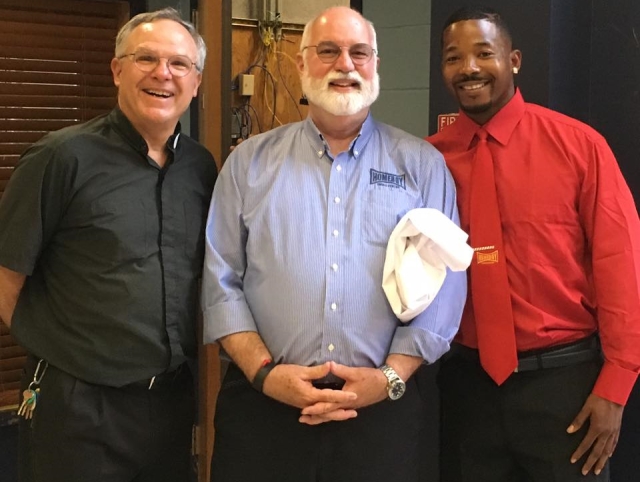 Jenkins said he reached out to a gang when he was 12 years old and eventually ended up in prison for robbery.

Jenkins said his parole officer connected him with Homeboy Industries. He’s now a California state firefighter and is getting the tattoos on his face removed. Tattoo removal is a service that Homeboy Industries offers.

“This man has changed my life,” said Jenkins of Fr. Boyle.

But Boyle downplayed his role. “The day will never come where I have more courage or I am more noble than Michael Jenkins,” he said.

Tammy Davis, a Decatur resident and parishioner of St. Thomas More, was visibly moved by both men’s stories. “I thought it was really beautiful,” she said of Fr. Boyle’s discussion. “I had read his book, so I knew a little bit about what he’d be talking about. I was especially moved by his comments on kinship. I enjoyed hearing Michael’s story, seeing Michael.”

She said hearing Jenkins’ experiences especially made her feel emotional. “Of course that’s the part that’s heartbreaking – to listen to another human being say those things.”

Jenkins told the crowd that sharing his story was part of his healing process. “My definition of recovery is not just the physical part, it’s the emotional,” Jenkins said. He said he’s learning how to be a father to his seven-year-old twins – something that’s been difficult because he did not have a father growing up.

“Now I do have a father,” Jenkins said. “A father that I never thought would come into my life. When I first met Father Greg he gave me a hug and I had never been hugged by a man, and he told me he loved me. … I never had that. For me to tell my son, I love you – kids crave love. They need your presence more than presents.”