A slide from a presentation about the South Decatur Village development. Source: City of Decatur
Share 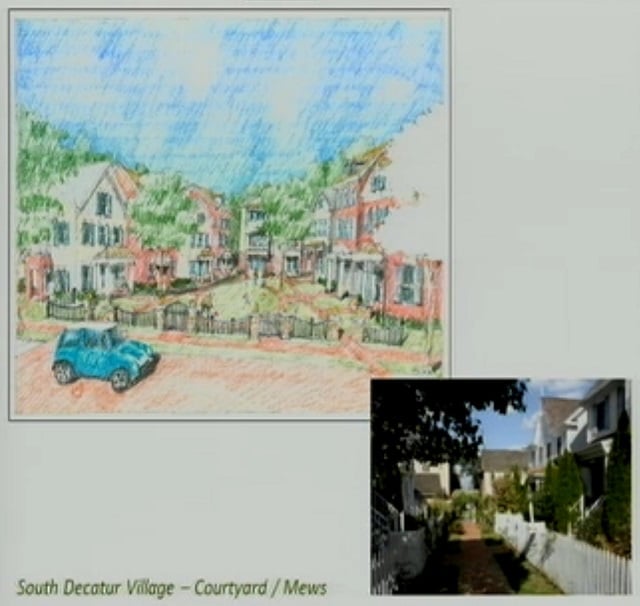 A slide from a presentation about the South Decatur Village development. Source: City of Decatur

The Decatur City Commission on Aug. 15 unanimously agreed to zoning and land-use changes that will allow for the development of 63 residential units at South Columbia and Katie Kerr drives.

The project is being developed by Stephen Arms and Bruce Gunter. Gunter is best known locally for his involvement with Progressive Redevelopment Incorporated, which redeveloped the Scottish Rite property in Oakhurst.

The development, called South Decatur Village, will be located on four acres. The rezoning allows for less density on the property. It will be a mix of town homes and single family detached housing. Under its old commercial zoning, the developers could’ve built 43 units on each acre.

The lower density appealed to commissioners who were weighing considerations about traffic and whether the development would increase the burden on the city’s overcrowded school system.

“The developers have asked for what’s considered down zoning,” Mayor Patti Garrett said.

Planning Director Angela Threadgill said at one time the property in question was being considered for an AT&T facility, but that project fell through. She said under the old zoning classification, “We are vulnerable to development at a density we would not like to see.”

Arms told Decaturish about 80 percent of the required tree canopy on site has been identified and he feels confident he can make up the additional 20 percent. He said some trees on the corner of the site can be preserved but many in the middle will have to be removed and replaced.

Threadgill said the site requires 78,574 square feet of canopy coverage and 53 new trees are required to be replanted on the site.

“Another 15 trees or so placed among the individual lots to achieve the required canopy coverage,” she said.

Some residents also asked for the installation of a turn lane from South Columbia onto Katie Kerr. Arms said the developers aren’t required to install a turn lane as a condition of the rezoning. Threadgill said the city plans a traffic study at that intersection to determine if there’s a need for any improvements.

Arms also noted that the development team has agreed to construct a 10-foot wide PATH trail in front of the property along South Columbia Drive that will eventually connect to the Avondale MARTA station.

Arms said he expects to close on the property within two months and site work could start early next year, with the first homes being available sometime in 2017.

Editor’s note: Portions of this report were compiled by viewing a live video stream of the Decatur City Commission’s Aug. 15 meeting.