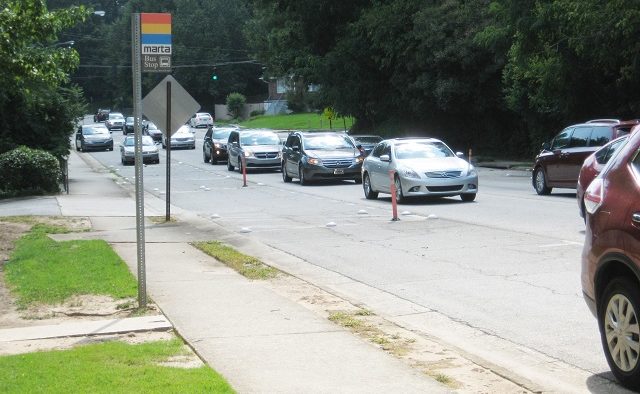 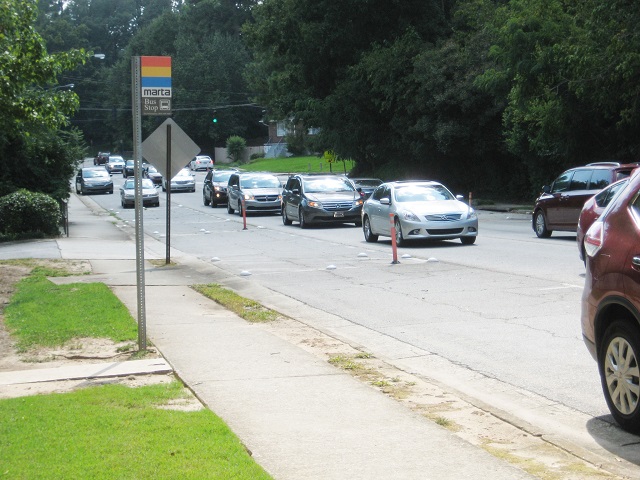 Church Street residents are concerned about an escalating traffic problem due to recent construction of numerous townhouses and businesses in the area.

“[There’s] too much building in too short a period of time, creating a lot more traffic than the area is designed to accommodate,” Judy Thompson, resident of Decatur Square Condominiums, said. “I’ve been in the complex since October 2010… it seems to me that the traffic has increased in that time.”

As a result, drivers have difficulty leaving from their homes, especially if they have to cross lanes, Decatur Square Condominiums HOA President Brian Jones said.

“By limiting traffic to one lane, it causes a constant flow of cars which make entering and leaving our complex more difficult/dangerous,” he said. “Residents also complain about the disks in the road, that they are too close to our entrances and they keep running over them.”

Connie Moore, who lives on a smaller lane connecting to Church Street, feels that the construction in the area has become “explosive.”

“The six new townhouses being built directly on Church Street are located exactly where two lanes merge into one. People seem to race to that area to get ahead of another car, knowing the lanes will merge,” she said.

Concerns about traffic on Church Street is nothing new to residents, however.

– There is a lack of coordination between county and city officials. One example is how the city bicycle lanes planned for Church Street will feed into the county part of Church Street, which does not allow bicycles. Even though these major developments on North Decatur are just outside the city limits, the input from the city has been non-existent.

– The Development of Regional Impact study completed for the Fuqua Development at the six-corners of Scott Boulevard only determined the impact on that corner and the immediate area of the streets, without taking into consideration how it would affect places such as Church Street south of the intersection with North Decatur Road or east of that intersection.

– The Medline LCI Plan calls for infrastructure developments that have not been implemented, but the land development it is meant to support will be completed well before the infrastructure issues are addressed. What infrastructural changes that are being made are not through the city/county officials but by the developers, which end where their developments end, follow no larger vision by the local governments, and are often ambiguous (such as the promised bicycle lanes beside the new apartments on Commerce Drive).

– The lack of cooperation makes it so a certain part of Church has certain laws but the county side has other laws. Impact studies do not take this into consideration. Codes on one side are different than the other side. Growth is occurring separately rather than as one vision for the area.

– The parking on Church near the pool at Glenlake Park closed off two lanes.

– The area needs a systematic plan for providing infrastructure before more residential and commercial development occurs.

– Too many commercial ventures, townhouses, and apartments in development.

Jones believes that the issue first worsened with the addition of street parking near Glenlake Park.

“When the city officials put in the parking on Church Street, no one I know knew about this beforehand and I find it difficult to believe anyone on Church Street had much input, considering how poorly it has been implemented,” he said.

As the traffic issue on Church Street persists, Moore believes that there are numerous stakeholders involved.

“This would include the Great Lakes neighborhood, Willow Lane neighbors, Decatur Heights, the city with Glenlake Park activities, and visitors and lots of pedestrians,” she said. “Again, as this is a major corridor connecting the DeKalb County areas with the City of Decatur proper. Many people traverse [it] and are impacted.”

Deanne Thomas, President of the Decatur Heights Neighborhood Association, expects the City of Decatur to anticipate and resolve the traffic impact on locals when planning developments.

“It’s not that residents want to prevent the area from evolving — we just want to ensure that needed transportation upgrades and pedestrian safety improvements keep pace with all of the changes,” she said. “The Church Street area neighborhoods have recently started working together to see to it that this happens.”

Former mayor Bill Floyd believes that the City of Decatur will be able to deal with the heavy traffic with the road diet plan devised when he was in office.

“There is a road diet scheduled for Church all the way from Commerce all the way to North Decatur road,” he said. “It’s to create a slower traffic pattern.”

As a resident of Church Street, Floyd finds it difficult to leave the driveway from his house and believes a slower traffic pattern is the best way to minimize dangers from speeding cars.

“The purpose is to make traffic OK for cars, not great for them, but okay for pedestrians and bicyclers too,” he said.

The City of Decatur does not have an official statement or response to the problem currently.

“We have not received any complaints to our knowledge,” Director of Design, Environment and Construction John Maximuk said. “For this reason, our office does not have any comments on this at this time.”

Jones hopes that the city government can make appropriate plans to deal with the issue.

“Past attempts to get answers on issues have been entirely frustrating… never getting a real answer, just vague answers and ‘we will look into this.’” he said. “I’ve been referred to multiple people and given the runaround since at least March of 2015.”

Thompson plans to organize a group of residents to discuss concerns about traffic with the City of Decatur.