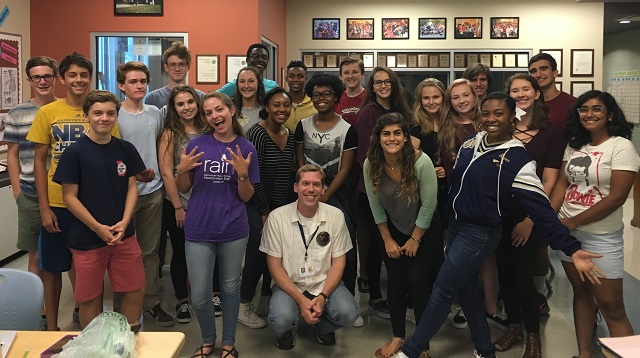 Students in Decatur High School’s convergence media program produce a magazine, video show and website. They have recently been honored nationally by Quill and Scroll and the National Scholastic Press Association. Credit: Contributed

“The award is presented to programs that score superior in each section of a comprehensive annual critique,” a press release from the convergence media program says.

“Your staff is well on its way to setting a trend for others to follow,” the Quill and Scroll’s evaluator wrote. “The storytelling fosters a deeper sense of shared community within your school because stories are built around people and their experiences.”

The high school showcases its work on 3ten.org. Decaturish created its first-ever internship for one graduate of the program, Mary Margaret Stewart, after discovering her work on the 3ten website.

“These students are amazing collaborators and hold each other to professional-level standards,” adviser Jon Reese said in the press release. “I’m thrilled that professionals outside of our small community are seeing that.”

The convergence media program’s news magazine “CARPE DIEM” was also recently named as a finalist for the National Scholastic Press Association’s 2016 Pacemaker Award, the press release says. Students in the program have been finalists for Sports Story of the Year, Multimedia Story of the Year and Illustration of the Year.