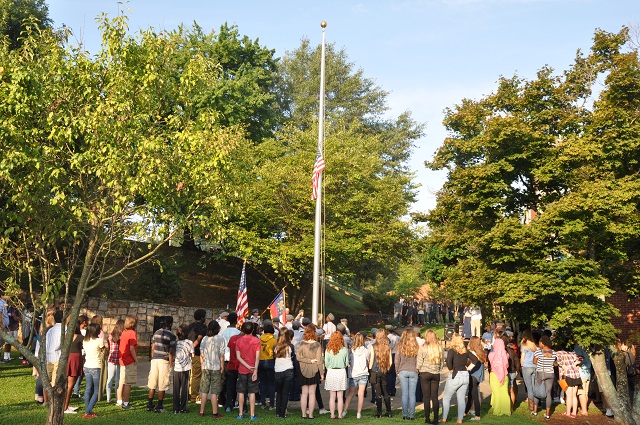 There will be several local events to mark the 15th anniversary of the Sept. 11, 2001 attack.

– Avondale Estates City Hall will temporarily close on Friday, Sept. 9, from 8:30 a.m. to 9 a.m. and a small ceremony will be held in Dewey Brown Plaza.

“The City will observe the 15th anniversary of the September 11, 2001, terrorist attack on the United States, a day that 2,977 innocent victims lost their lives,” the announcement from the city says. “Please take a moment on Friday, Sept. 9, to join us to remember the victims, and honor their families and the heroes who came forward during the rescue efforts in the days and weeks that followed. A commemorative display featuring hundreds of miniature American flags has been placed at the Dewey Brown Plaza across the street from City Hall. In the event of inclement weather the ceremony will be cancelled.”

“The 8:30 ceremony will be held at the flagpole in front of the school and the 2:30 ceremony will be in the DHS Performing Arts building,” retired Decatur High teacher Chris Billingsley said. “City of Decatur Fire Marshal and Deputy Chief Stephanie Harpring and retired City Schools of Decatur Assistant Superintendent of Technology Mary Farmer will be honored at the afternoon ceremony for their service to the City of Decatur that reflected ‘the virtues of those who, on September 11, 2001, sacrificed their lives so that we can live in peace’ (DHS JROTC 9/11 Service Award). Parking is limited so please walk to Decatur High School.”

Decatur High is located at 310 North McDonough Street in Decatur.

– There will be an interfaith prayer service on Sept. 11 at Ebster Pavilion in Decatur, located near 404 W. Trinity, between the Decatur Police Station and City Schools of Decatur’s central office.

It begins at 3 p.m. with a potluck meal and the program begins at 4 p.m.

“A broad coalition of local citizens is planning this event, including Catholics, Jews, Muslims, and Protestants,” the event announcement says. “Area musical groups have been invited to offer their voices, including the Charles Drew School Chorus.”

Decatur Civic Chorus will also perform at the event.

Pastor James Brewer-Calvert, who helped to plan the service, said, “We are hoping for a solid turnout from our many neighbors from across the city. That Sunday, record the fourth quarter of the Falcons game and show up! Bring a favorite, simple dish to share, a lawn chair if you like, and an open mind and heart. Our prayer is that this event will foster new relationships as well as provide room for us to grieve and remember those who gave their lives, including the police, firefighters, and EMTs who went into danger so that others could get out to safety.  We are intentional about being interfaith and multicultural because people from all walks either died on 9-11 or have been affected. We are all implicated; we all suffer; and more than ever we need one another for healing and moving forward with grace.”