In 2016, the School Board gave Superintendent David Dude money to buy a home. Here's a file photo of the people serving on the School Board at the time the payment was approved. City Schools of Decatur Board of Education: (left to right) Tasha White, Vice Chair Garrett Goebel, Lewis Jones, Chair Annie Caiola, Superintendent Dr. David Dude, and Bernadette Seals. Source: City Schools of Decatur
Share

This Nov. 8, city of Decatur voters will consider expanding the Decatur school homestead tax exemption to seniors 65 and older.

The exemption will save seniors $993 in school taxes on every $100,000 of their home’s value. The School Board pushed for the resolution as a gesture to seniors concerned about housing affordability in the face of higher taxes to pay off school construction debt.

But what will a tax break for seniors mean for people who aren’t eligible for the tax break? That’s a question the School Board is trying to answer.

During the Sept. 6 regular meeting, the Board passed around a draft flyer about the referendum that will be distributed to voters for informational purposes. Legally, Decatur School Board members cannot advocate for the approval or defeat of a ballot referendum. A 2012 Attorney General’s opinion says that courts have ruled public officials, “may not use their resources to persuade voters to support or oppose a ballot question.” Superintendent David Dude told Decaturish that CSD’s attorneys have approved the flyer as being consistent with that AG opinion.

“We continue to struggle with that because it’s a very nuanced answer,” Superintendent David Dude told the School Board.

Currently, the board’s proposed answer is:

“Not necessarily. For years, Decatur’s assessments have increased and the school district has had an increase in the operating revenues without raising the millage. The Board Placed a five-year sunset provision in the homestead exemption legislation to study and potentially revise the exemption to handle any unintended consequences.”

Dude asked the board for its opinions about how to refine the answer to the question. Board member Tasha White suggested adding a link to a website with additional information.

School Board member Lewis Jones said there may not be a definitive answer CSD can give voters.

“The problem is, we can’t answer it,” Jones said. “It’s unanswerable. We can’t yet know the total effect on the budget and other variables.”

CSD estimates the exemption will translate to $1.2 million in lost revenue annually.

School Board member Garrett Goebel proposed another way of looking at the question.

He said the costs of educating a family that moves in when a senior moves out might be higher than what the school system will lose in revenue if the homestead tax exemption is approved.

“We’re talking about potential lost revenue and you’re balancing that against what happens if a senior moves out and a family moves in,” Goebel said.

Goebel added that he’s fine with the flyer’s answer as it is currently written.

“I am happy with the language you have,” he said. “You’ve said, ‘Not necessarily,’ which holds out the possibility but that we’re going to study it and act accordingly.”

Dude also said the school system could see more tax money from increased commercial and residential development around the city that would offset the lost revenue.

Jones said other taxpayers will certainly be affected by the homestead tax exemption if it passes.

“One way or another people who don’t get the benefit of the exemption will fund what we’re proposing is the right thing to do,” he said.

Bernadette Seals said the City Schools of Decatur could consider providing information about the cost differences between seniors receiving the exemption versus what it costs the school system to educate a family living in Decatur.

Following that thought, Dude said, “In addition to social benefits of a diverse population, they don’t have kids that cost the district money. The taxes from the family likely don’t cover the local share of the cost.”

Board chair Annie Caiola was absent from the School Board’s Sept. 7 meeting.

Dude and school staff will continue to work on the draft. Here is a copy of the draft provided to Decaturish. CSD will release a revised copy soon, a spokesperson said. 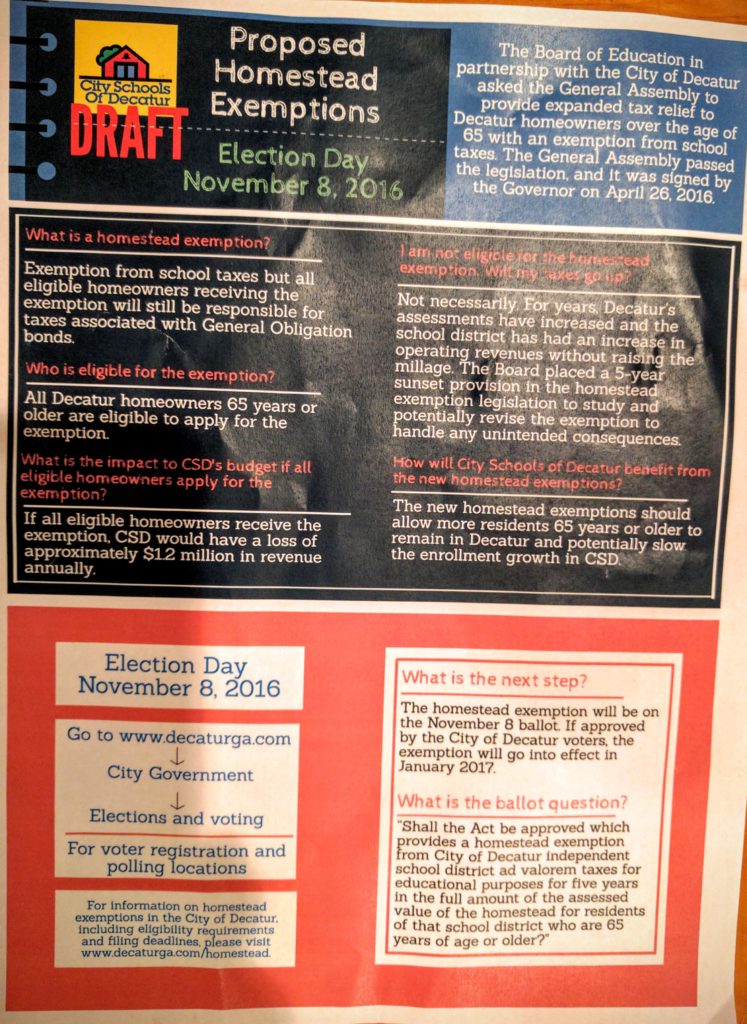