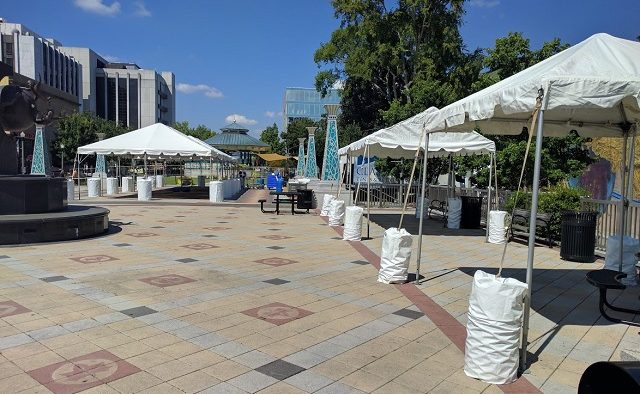 Tents are going up at the Decatur Square as part of preparations for the Decatur Book Festival. Photo by Dan Whisenhunt
Share 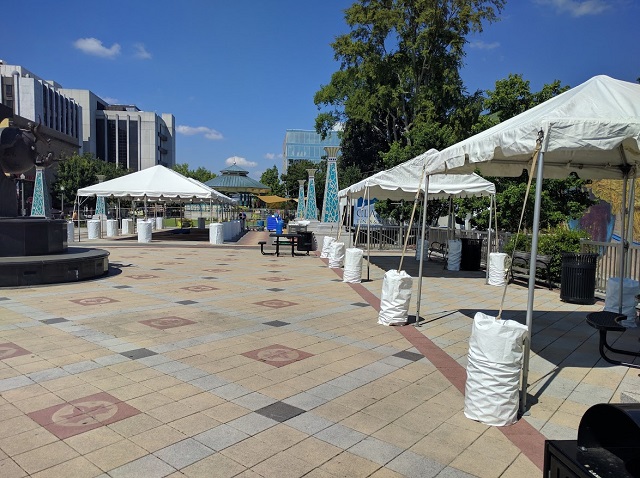 Tents are going up at the Decatur Square as part of preparations for the Decatur Book Festival. Photo by Dan Whisenhunt

The planning for the Decatur Book Festival is down to the little details.

As the tents go up on the Decatur Square, Programming Director Julie Wilson is juggling the schedules and accommodations for about 300 authors and 150 interviewers and moderators.

“It’s the tiny details,” she said. “Certain authors get keynote tickets. It’s coordinating golf carts for authors who have some mobility challenges, changes at the last minute, providing author information to volunteers and stage captains.”

Wilson said the festival this year will be refocusing its attention on local authors.

“We’ve got a wealth of them,” Wilson said. For a full list of presenting authors at this year’s festival, click here.

The weather forecast is promising. It’s expected to be sunny with temperatures in the high 80’s. There will be thousands of people milling around. Wilson said organizers estimate 85,000 to 90,000 people were in Decatur for the Book Festival at some point during Labor Day weekend last year.

With that many people hanging around downtown, and expected road closures surrounding the event, taking MARTA to the Decatur Square is probably the best bet.

“Bicycles are a commonly stolen item and are not registered like vehicles,” Lt. Jennifer Ross said. “Bicycle registration includes bringing your bicycle, providing owner contact information, having the manufacturer and serial number documented and having a numbered decal applied to and a photo taken of your bicycle.”