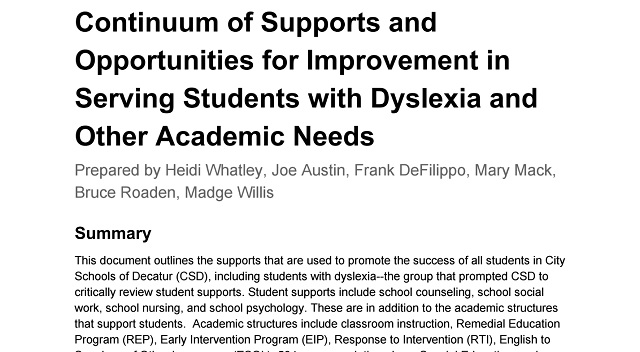 Parents of dyslexic students were highly critical of a City Schools of Decatur-produced report that outlines what the school system is doing to help their children.

CSD produced the report after an emotional Aug. 2 work session where School Board members listened to parents of dyslexic students discuss their frustration with obtaining support from the school system.

Speakers were not happy with what the report had to say.

Jen Rhett was “very encouraged” at the last School Board meeting and was looking forward to the report.

“I was very surprised when I actually read the report,” she said. “I found the document to be vague. I found it to be generic. It was lacking in validated research and I felt that it was disconnected to those next steps that really kind of inspired me.”

Karen Landry was also discouraged by the report. Landry had a hard time reading more than a few pages at a time because she would get so angry, she says.

“I understand that I have a bias and I’m trying to check that, but the report feels like a very thin-skinned self-serving justification of the status quo,” she said. “It tells us that CSD is following the law. Well, good. But that doesn’t get us to be one of the best school districts in the country, which is what our stated goal is.”

Marisa Wheatley feels like the report was possibly biased.

“We need to take into account the authors and the source as perhaps being inherently biased to prove that the system is working or that the system is following the rules,” she said. “I agree with comments that have been said before that there was vagueness or a lack of data that was clear.”

“The data [shows] that nationally, 10 percent of students qualify for special services. Decatur shows that we provide services to 56 percent of student. It looks like we’re doing really well,” she said. “However in that chart, we’re including students that speak English as a second language.”

“We have already identified a university group that can do a program evaluation for us,” he said. “[Georgia State has] significant expertise in the area of special education. They have reviewed what we’ve talked about regarding dyslexia and so I’m very hopeful for that.”

A potential resource for students with dyslexia or other academic and social-related issues is in the works, according to Dude.

“In Marietta City they have had a very successful effort to create a student life center. Basically, it’s a very safe place for students to go to get a variety of services based on what the needs are in the community,” he said.

The board continued to give more context on how the issue will be handled. Board Chair Annie Caiola doesn’t believe that the report is a finalized look at how the school system will support dyslexic students.

“I can certainly understand why there would be some frustration after reading the report if the assumption were that the report was the final word on this and I think it’s actually just the beginning,” she said. “There’s still a lot of work that needs to be done.”

Dude understands that parents with students that will be affected the board’s plans don’t want to lose any more time.

“We’re doing our best to push things as quickly as we can, but to also do it in a very deliberate manner to make sure that we don’t have to come back and fix whatever changes we’ve made,” he said.