UPDATE: Convicted murderer disappears while out to lunch before verdict

UPDATE: Convicted murderer disappears while out to lunch before verdict A convicted murderer disappeared after leaving the courtroom for lunch prior to a jury finding him guilty of murder. 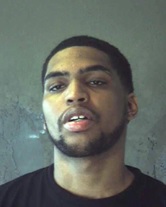 “During Mr. Mitchell’s trial yesterday, Oct. 3, 2016 in DeKalb County Superior Court, he left the courtroom when the session was recessed for lunch but failed to return for the jury’s verdict,” a press release from the Sheriff’s Office says. “The 24 year-old Atlanta man, who had been out of jail after being released on bond in 2014, was found guilty on all counts.”

Mitchell was found guilty of malice murder, four counts of felony murder, one count of aggravated assault, one count of burglary in the first degree, two counts of criminal attempt to commit a felony and possession of a firearm during the commission of a felony.

No other details about the crime or his escape were available, and the Sheriff’s Office has declined further comment. According to the Atlanta Journal Constitution, Mitchell was convicted of murdering Marcus Beanite Waters. Mitchell had been released on bond, the AJC reported.