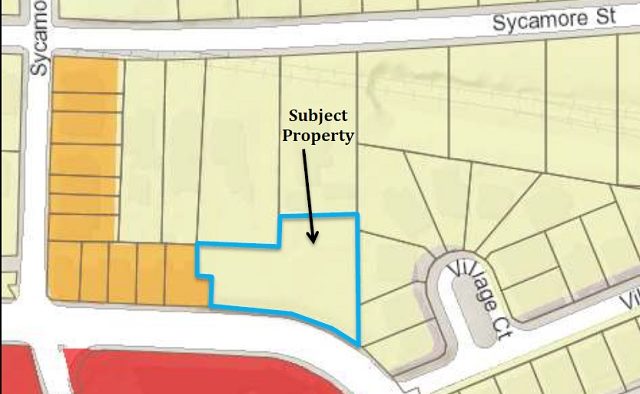 The location of the Decatur Cottage Court housing development. Source: City of Decatur

The city of Decatur is using its Downtown Development Authority to develop an affordable housing pilot project in the city.

But the city isn’t sure how it will divvy up the six Cottage Court homes it is building at 230 Commerce Drive. One possibility will be selling the homes via a lottery.

Assistant City Manager Lyn Menne said city is developing this pilot project to “prove the depth of the market” for developers.

“We don’t intend for this project to be a one-off,” Menne said. “We really want this to be a catalyst for these types of projects throughout our community.”

City Commissioners and Menne discussed the possibilities during the commission’s regular meeting on Monday, Oct.  17. The City Commission unanimously approved rezoning for the project. The six “Cottage Court” homes will be built on a half-acre lot on 230 Commerce Drive, near the intersection with Village Walk Drive. The homes will be limited to 1 and 1/2 stories in height,  and three of the houses will be placed along Commerce Drive, the zoning application says. There will be a shared courtyard. The homes will be sold to buyers who make 60 to 80 percent of the median household income in Decatur. In 2013, the city reported its median household income as $63,117.

The question about who will get to buy the homes is one the city is still trying to answer.

Menne said the city is definitely interested in selling the homes – that’s the whole point of the exercise, after all – and doesn’t want to be a landlord. She said she wants to target city and City Schools of  Decatur employees who wouldn’t otherwise be able to afford to live in Decatur.

She said the city has considered, “Making it available to school employees through teachers through a lottery. Maybe.” The city also has not hired a builder yet, she said. Menne told Decaturish construction won’t start before spring of 2017.

“We’ve worked really, really hard on this project,” Menne told the commission. “We’re excited about it and we hope it’s the beginning of many more small homes.”

Editor’s note: This report was compiled by watching the live video stream of the Decatur City Commission meeting.