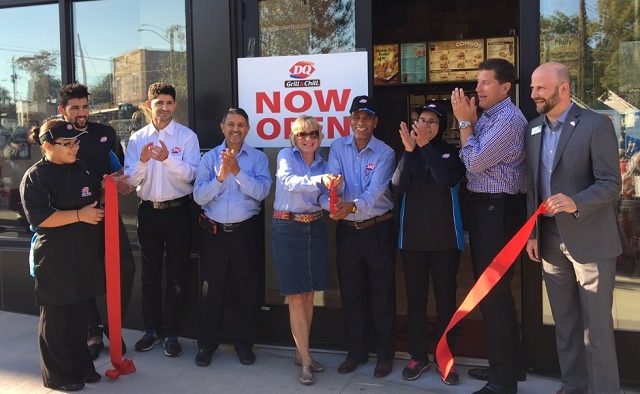 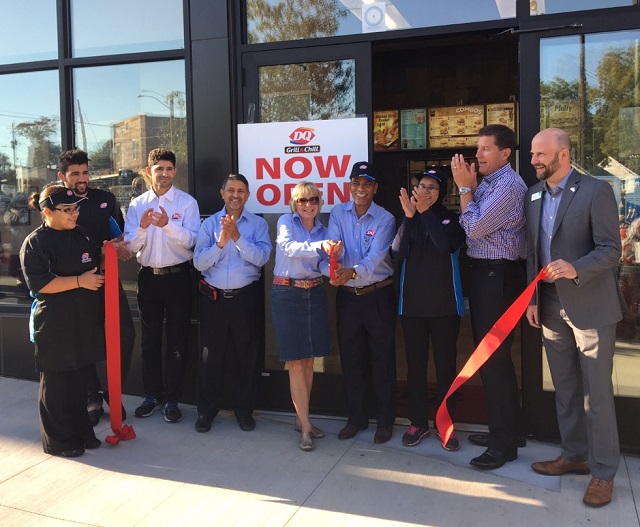 City officials celebrated the reopening of the Decatur Dairy Queen on Oct. 31. Photo by Cynthia Millhorn

At 10 a.m., this morning, Oct. 31st, amid unseasonably warm temperatures, a crowd gathered in Downtown Decatur to welcome back a beloved hot weather favorite, the city’s beloved Dairy Queen.

Over two years ago, the original Dairy Queen barn structure closed and left some wondering if the popular eatery would ever reopen. A community favorite for over 30 years, the structure was demolished to make room for the new construction of Arlo, a mixed-use apartment complex. As hoped, the Decatur mainstay is now housed in this same complex located at 245 East Trinity Place and, as of today, finally, open for business. 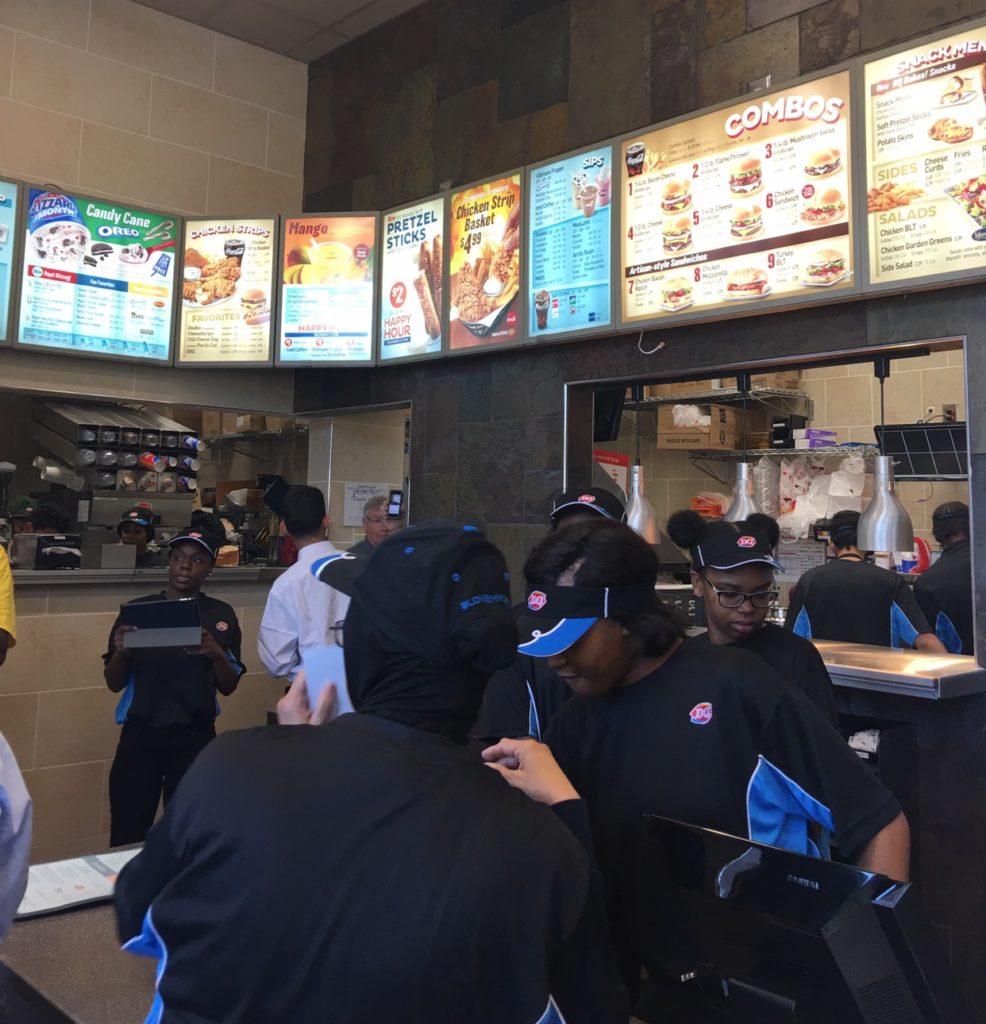 The atmosphere was joyful and lighthearted as City of Decatur staff mingled and celebrated with the restaurant staff and the Momin family. City of Decatur Assistant Director of Community and Economic Development Linda Harris praised Nisar Momin for being a constant “community supporter” and praised his ongoing contributions and financial donations to community groups and children’s sports teams. Harris commended the Momin family’s generosity and, as a testament to the family’s goodwill, all attendees to the ribbon cutting were invited into the dining room and treated to complimentary DQ treats made to order by the staff.

In addition to access to unlimited frozen treats, burgers and fries, the reopening of this Dairy Queen location translates into more jobs. According to Nadera Momin, the business boasts a staff of 16. These jobs are currently filled by local members of the community and the continued success of the establishment will ensure ongoing employment opportunities.

Of the 16 employed at the restaurant, several are graduates of Decatur High school and grew up frequenting the Dairy Queen eatery in its former home.

Employee Sunny Carter said, “Me and my family used to come every Sunday to get ice cream.”

Carter said she felt the loss when the restaurant closed. “It was really sad. Everyone was sad when it closed down.”

Carter added she is excited to now be an employee of her favorite ice cream shop and is happy to be a part of the business that has meant so much to her, her family and her community.

Like Carter, Caelin Hayes is a new employee who finished the rigorous training and couldn’t be happier about the re-opening. Hayes said, “The Momins are very nice people and great to work for…I’m excited for my new job!”

Nadera Momin told everyone how deeply grateful she and her family are to the people of Decatur for their ongoing support and patronage.

And, it appears the feeling is mutual, city spokesperson Renae Madison said.

“This is a really long time coming,” she said. “Everyone is excited.”

Madison added that the City has received lots of Facebook comments from community members eager to see the eatery re-open.

In addition to a brand new, sleek venue, the beloved institution can now accommodate 47 dine-in customers. This is an improvement over the previous barn Dairy Queen which could only accommodate 38 diners despite being 174 square feet larger, measuring a total of 2,000 square feet. By contrast, the new venue measures only 1,826 feet, but has an airy, spacious dining area.

After months of many locals fearing the restaurant would not return, Decatur residents will be happy to know this Halloween they’re receiving a real treat and can once again frequent an old favorite in a new spot.

Martin, the DBA president, indulged in a DQ blizzard and said the ice cream is, “Better than ever.” 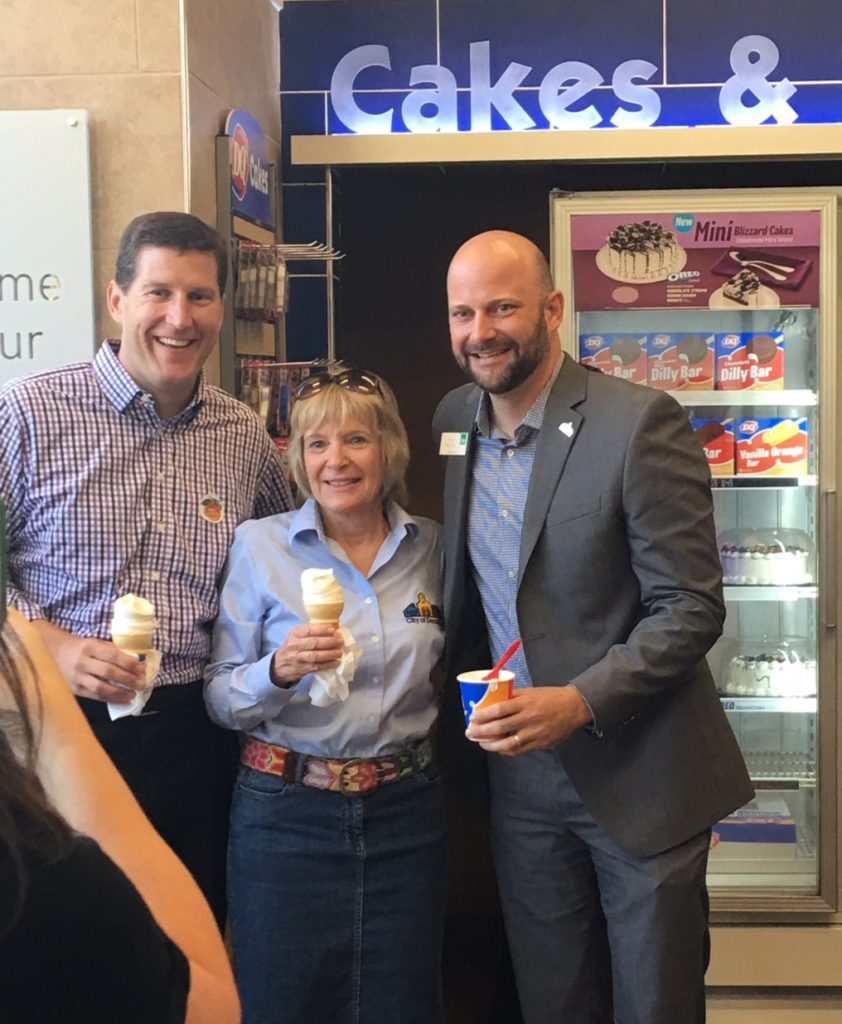