Highland Bakery, Taziki’s Mediterranean Cafe, and Orangetheory Fitness have signed leases for The Place on Ponce. Photo by Dena Mellick

Decatur’s long-awaited Highland Bakery location will officially open Oct. 3, more than a year after the expansion was first announced.

This sign was on the door Oct. 2. It says, “Highland Bakery of Decatur will be officially open to the public on Monday, Oct. 3.” 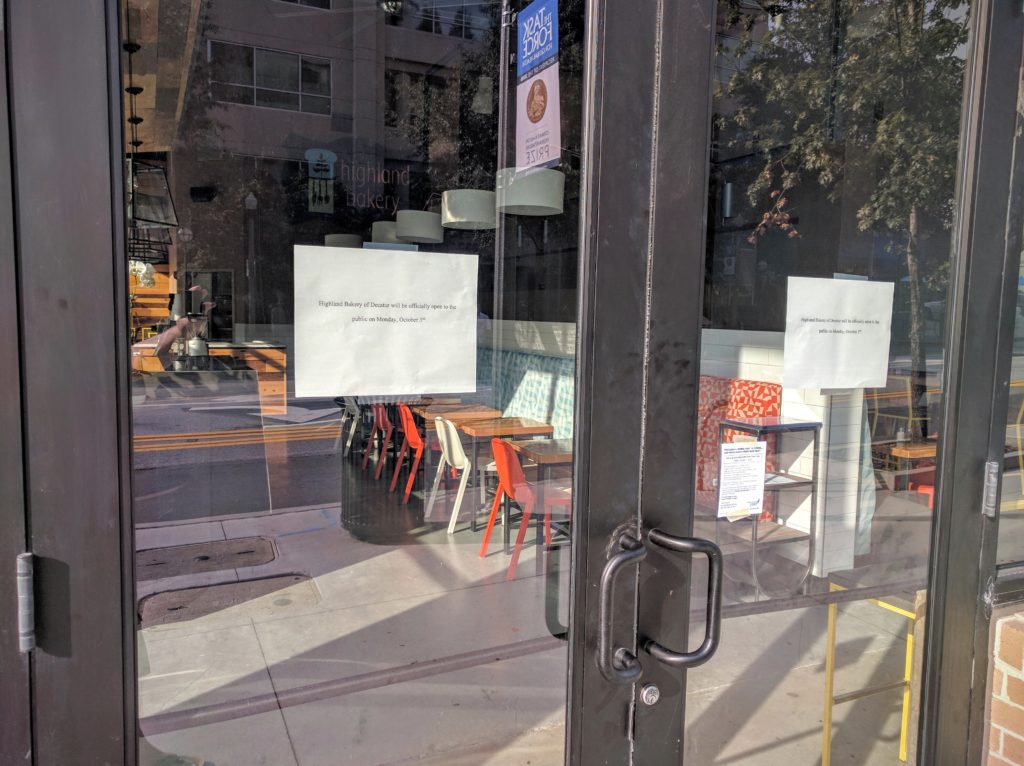 The store will be located at 319 West Ponce de Leon Avenue. The owner is Jill Johnson, a friend of Highland Bakery founder Stacey Eames.

“She actually sold me my very first espresso machine when I started in business in 1993,” Eames told Decaturish in March. “She was one of Mellow Mushroom’s first franchisees, in the early days of franchising. It’s going to be such a win-win for her because she went through that whole process with Mellow Mushroom.”

Eames said while Johnson will be running the show in Decatur, she’ll be keeping a close watch on things.

“The great thing is I live in Decatur and I live right around the corner and I will definitely have a vested interest in it,” Eames said.

The first Highland Bakery opened in 2003. There are locations in Old Fourth Ward, Buckhead, Midtown, Emory and Georgia Tech.

The original press release about the Decatur Highland Bakery location, sent to media outlets in 2015, provided some information about what the Decatur location will look like and what will be on the menu.

“Their … location will boast 3,000 square feet of main level seating as well as a 500 square foot mezzanine,” the press release said. “A full breakfast and lunch menu will be served, including signature dishes such as Fried Chicken Benedict, Blueberry Ricotta Pancakes, Peanut Butter French Toast as well as gourmet coffee. The new space will also include a full service bakery offering the whole grain, all-natural, freshly baked breads and delectable pastries that have made Highland Bakery a local favorite. Catering and custom cakes are also available.”