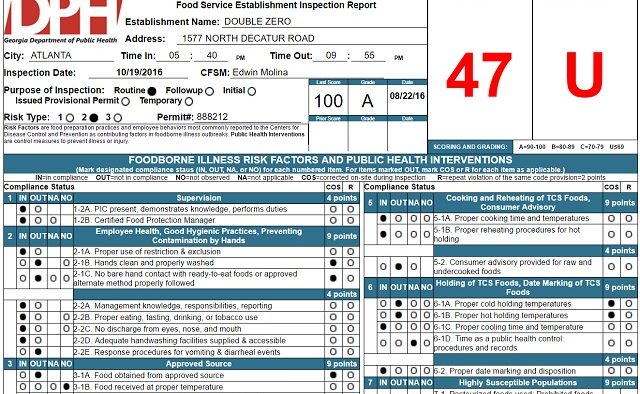 A Georgia Department of Public Health inspection did not go well for Double Zero, an Italian restaurant in Emory Village.

As first reported by the Atlanta Journal Constitution, Double Zero’s kitchen earned a 47. Among the violations, the inspector, “Observed an employee handle dirty dishes and then proceed to handle clean dishes without washing hands.”

At another point the inspector, “Observed the consumer advisory and the menu missing the disclosure statement.”

“Facility is using raw shelled eggs, that are not cooked prior to being put in the drink, in a sour drink,” the inspector wrote. “Drink not listed on menu to indicate that it contains raw/ undercooked animal derived products. Observed no asterisks next to reminder statement.”

The restaurant relocated from Sandy Springs this year.

It’s a not uncommon refrain from local restaurant owners. Cafe Lilly recently received a health score of 67, despite passing multiple prior inspections. In 2014, three local restaurants received poor scores and said the health inspector was being unreasonable.

Brick Store, Cakes & Ale and Pallookaville all received lower scores in 2014 and said the Health Department was cracking down more than usual.