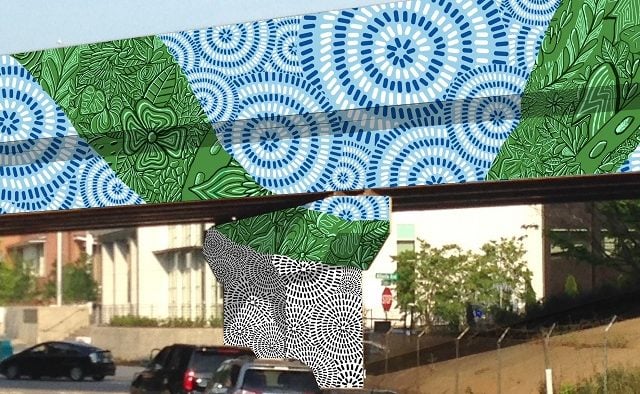 A $30,000 project to paint a mural on the MARTA overpass at West Trinity and Atlanta Avenue will wind up costing as much as $65,000 more due to a lead contamination problem.

MARTA will pick up the cost for cleaning up the lead contamination, according to the city of Decatur.

The city received a $15,000 grant, which required a 100 percent match. The Decatur Arts Alliance selected the MILAGROS Collective, from Miami and New Orleans, to head up the mural project. Design concepts were unveiled Aug. 31 and painting was supposed to begin on Sept. 1, according to the city.

“However, when necessary preparation of the bridge for the mural was discussed, it was disclosed that the steel portions of the bridge had been painted using lead materials and that this condition needed to be abated prior to painting the mural,” a memo from Deputy City Manager Hugh Saxon says.

Saxon is requesting the City Commission establish a project budget of $65,000 and award a $58,610 contract to Clearwater Environmental Resources to begin the abatement project. Saxon’s memo says MARTA will reimburse the city for this work.

The item is on the City Commission’s Oct. 3 agenda. The abatement project will take at least a month, putting the project two months behind schedule.

“Because of the delay, changing weather and Milagros schedule, there is some urgency in getting this work done professionally and quickly,” Saxon’s memo says.

The Oct. 3 meeting begins at 7:30 p.m. and will be held at City Hall, located at 509 North McDonough Street. All meetings are open to the public.