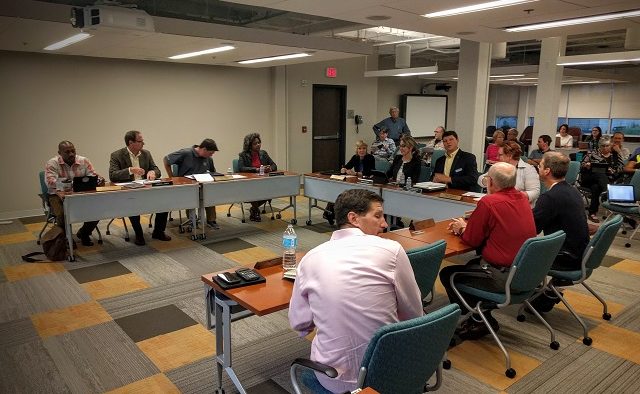 Members of the Decatur School Board and Decatur City Commission held a joint meeting on Oct. 12, 2016. Photo by Dan Whisenhunt
Share 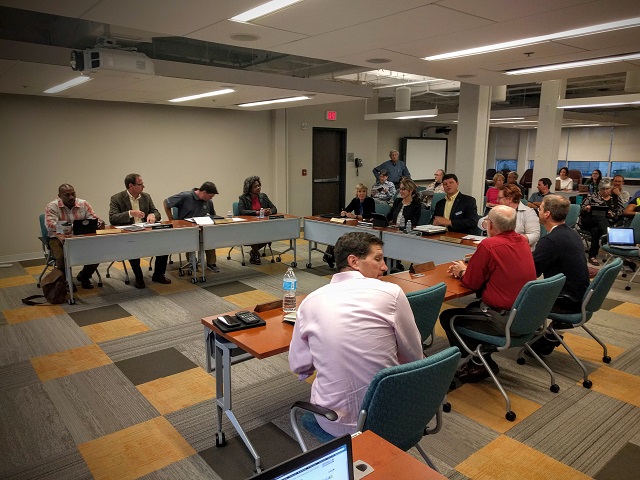 Members of the Decatur School Board and Decatur City Commission held a joint meeting on Oct. 12. Photo by Dan Whisenhunt

People who attended a work session between the Decatur School Board and City Commission on Oct. 12 might’ve had a little trouble following along.

That’s understandable. The key to deciphering the meeting about “annexation metrics” would be the actual annexation metrics. The metrics are meant to measure the impact annexation would have City Schools of Decatur’s enrollment. A document Superintendent David Dude provided explaining how this could be measured was given to members of the School Board and the City Commission, but not the public.

Based on what could be gleaned from the discussion, it’s clear that any annexation plan Decatur pursues would likely include residential areas. If that happens, it would likely increase the number of students attending CSD.

That idea was a nonstarter when annexation was being discussed by the city over a year ago. The city wanted commercial properties but drew the annexation maps to specifically avoid areas that would add students to the city’s burgeoning school system.

After the Oct. 12 meeting, Mayor Patti Garrett confirmed that members of the city’s legislative delegation have told Decatur it must consider annexation plans that include residential areas.

“I would say that is the message we’ve always gotten,” Garrett said.

When Decaturish asked for a copy of the document containing the annexation metrics, which is a public record under state law, Dude refused to turn it over. He said wouldn’t turn it over because he objected to the publication of a document in an unrelated Decaturish article because the document was a draft and not the final version.

The superintendent walked away without commenting further, and other attendees of the meeting were reluctant to share what Dude had shared with them. Commissioner Fred Boykin allowed Decaturish to photograph one page of the document before he changed his mind and took the document away. School Board Chair Annie Caiola offered to show the full document, without allowing a photograph of it.

The state’s open records law says that even records in draft form are still considered public records. A recent Decaturish article about the senior homestead tax exemption included the draft copy of a flyer the School Board was developing to inform voters. It’s not clear if that is the article Dude was upset about.

“I respectfully request that you refrain from publishing the actual document as the final version will be available soon,” Dude said.

That request is being honored because the numbers in the document are place holders and not accurate. Decaturish asked for a copy of the document without the numbers so the public can see exactly what CSD is measuring. Here is what Dude provided:

A glance of the document shows it contains categories like residential profiles, the number of bedrooms, growth projections, demographic profiles and “post-annexation turnover.”

That, Caiola said, means how quickly annexed areas will fill up with families anxious to send their kids to CSD.

A further review of the document shows CSD is trying to get a handle on total anticipated students from one, two and three-bedroom apartments, as well as condos and townhouses. The document will also measure how much revenue annexing new students will generate versus what it will cost per pupil to educate them.

“It’s incredibly thorough,” she said. “It presents a mathematical process for accounting for all kinds of variables in a very thorough way, including the impact of types of homes, types of residents in terms of age, in terms of racial demographics, income levels. So it’s a way of kind of looking at, not just the numbers, but how will the demographics of Decatur change if we’re looking at certain types of areas. It’s very thorough and methodical. It creates a tool for us to use to put data in based on whatever the proposed areas of annexation are and spit out numbers that I think are based on a reliable methodology.”

Mayor Garrett said the annexation metrics document, “has a lot of thought into a number of factors that will help us get the data … that will give us the projections and best estimates.”

She said the next step is to gather real data to plug into the metrics, not just hypothetical numbers. She said the School Board and City Commission will both vote to officially accept the annexation metrics.

City Manager Peggy Merriss said Decatur will study the 2014 annexation of the Parkwood neighborhood, the last major residential annexation in the city, to study lessons learned from that process. She said she hopes both the School Board and City Commission will agree on the metrics by the end of December.

Can all of this be finished by the start of the 2017 Legislative session in January?

“I don’t feel any false sense of deadlines,” Merriss said. “It’s going to be completed when it’s a good plan worthy of being completed. On the flip side, it could also be if, all of a sudden, we get pushed by some proposal that’s not going to be in our best interest, then we can ramp up really fast. I think that’s the beauty of having kind of your baselines and your foundations and framework built and agreed upon by both elected bodies.”