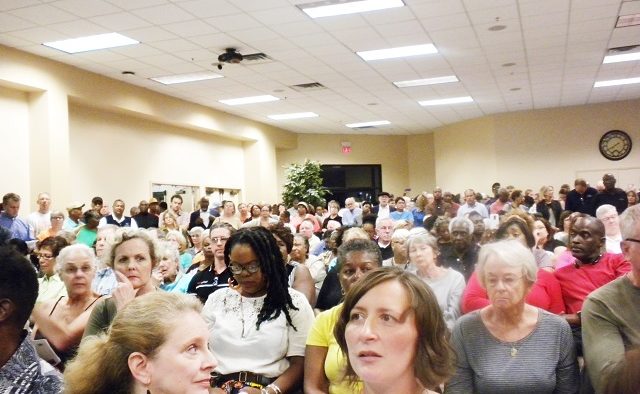 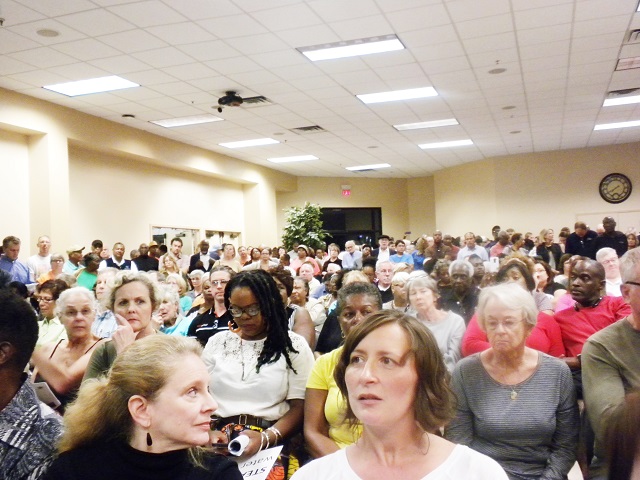 DeKalb County residents have been infuriated with overcharged water bills for years, but animosity rose to another level at last night’s water bill meeting.

The meeting produced a huge turnout of angry customers.

May was not present at the meeting due to another appointment in Athens.

“I think the CEO has been more focused on micromanaging where my movements and the movements of other commissioners are throughout the county rather than managing this crisis,” she said.

She also felt that May did not take enough responsibility.

“I feel like this town hall [meeting] should have been called by the CEO and not by us,” she said to tumultuous applause. “The very fact that that he has chose not to do this is sending a message.” 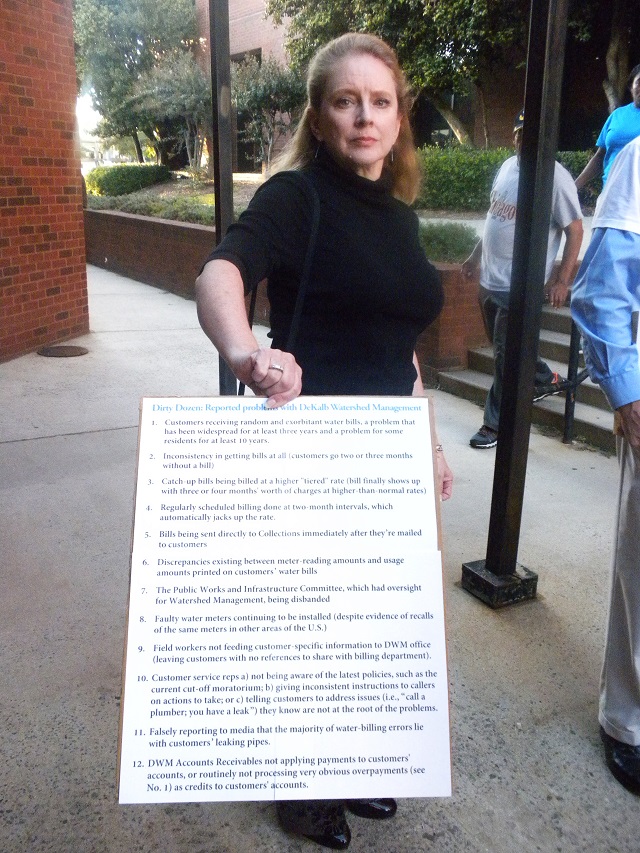 “The Dirty Dozen” is a compilation of common concerns of sky-high water bills residents have. This sign was placed on a chair in front of the DeKalb commissioners’ pedestal yesterday evening. Photo by Duo-Wei Yang

A presentation of water meters followed commissioner statements, which felt meaningless to some attendees.

“I already know how they work,” Lynn Medcalf said as the water billing staff explained the structure of the three types of meters used in DeKalb.

After the presentation concluded, Williams announced that he would play a video that would further discuss the water bill problem, which resulted in jeers. The county will post the video online instead.

Jason Kendall from Kendall Supply Inc., DeKalb’s water meter provider, then explained that some made before 2014 likely had flaws and would be replaced by early 2017 or later.

“Currently we have about 55,000 meters purchased prior to 2014. If any meter shows an anomaly, it’s slated for being replaced,” he said.

So far, around 2,200 meters have been replaced, according to Kendall.

“We just discovered this last issue in the last six hours,” Williams said, which incited bursts of outrage.

To conclude the meeting, residents voiced their horror stories during public comment, which not only have been financially difficult, but life-threatening for some.

Founder of Facebook group Unbelieveable DeKalb Water Bills Star McKenzie (right) is due next Wednesday, but that didn’t stop her from giving a speech to the commissioners.
“No other company could stay in business with the-customers-always-wrong attitude, “she said. “What part of this do you take responsibility for? Why have these billing issues been going on for so long?” Photo by Duo-Wei Yang

Beverly Heimburger is from South Carolina, but made the trip to Decatur to represent her father Paul Halpern, a disabled Korean War veteran.

DeKalb County later cut Halpern’s water for almost two weeks and refused to work with Heimburger in any way.

“Oh incidentally, after I raised as much pain and reached out, I had to go to the VA hospital because my father’s life was in jeopardy for hygiene and medical purposes,” she said.

Stone Mountain homeowner Mai Brew faced a similar situation to Halpern, she tells Decaturish. When she was overseas, DeKalb County cut her house’s water supply off and took the meter away. Her parents were living in her house at the time.

“My parents don’t even speak any English. They can’t even go the nextdoor neighbors to ask ‘can you help me?’” she said with tears in her eyes. “I spent $300 in international phone calls pleading with DeKalb County. They said no.”

After CBS aired Brew’s story, DeKalb commissioners set up a meeting which included a group of tax collectors and the finance team who she had all pleaded with for three weeks.

“Nobody said anything. All their heads were down,” she said.

Scott Towler, Director of the Watershed Department, and Williams were also present at that meeting.

Listen: One of the public comments made during the Oct. 6 meeting.