Supporters of the Oakhurst Dog Park say that the Audubon Society has certified the space as a wildlife sanctuary.

The dog park received the certification on Nov. 9, and Decatur Mayor Patti Garrett mentioned it during her comments at the City Commission’s Nov. 21 meeting.

Lee Goldsmith, a longtime supporter of the park, said in an email, “That certification encourages properties to enhance the land for birds and other wildlife. The Atlanta Audubon’s goal is to create a network of certified wildlife sanctuaries throughout metro Atlanta to counter the loss of wildlife habitat and to provide additional habitat for hundreds of species of birds.”

Goldsmith said the park’s advocates will have to keep invasive plants and vines under control, as well as eliminate the use of chemicals and herbicides to keep the designation. A dense undergrowth intended to attract birds and other wildlife will also be required, Goldsmith said.

“It has taken the Oakhurst Dog Park nearly two years to receive this certification, which included eliminating massive amounts of wisteria, healing several trees, creating undergrowth, and saving the forested portion of the Dog Park from development,” he wrote. “The Audubon Society gave us a few additional recommendations moving forward, including installing several bluebird boxes on the fence near the water, adding a few bird shelters in the forest, and adding a bat house or two. The Atlanta Audubon Society mentioned that we are the first Dog Park that they have ever certified and the two volunteers as well as the director of the sanctuary program we’re all excited and enthusiastic to add the Oakhurst Dog Park to their list of wildlife sanctuaries.”

Last year, a developer proposed buying part of the Dog Park from the Boys & Girls Club to develop it into single family homes, but the deal fell through. 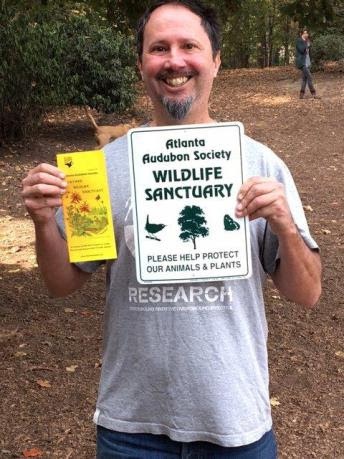 Pictured is Dog Park Champion Lee Goldsmith who was instrumental in the Oakhurst Dog Park receiving the designation. Lee is also a City of Decatur Hometown Hero. Photo provided by the city of Decatur