Decatur officers forced out over $7, but another officer kept his job after DUI

Decatur officers forced out over $7, but another officer kept his job after DUI 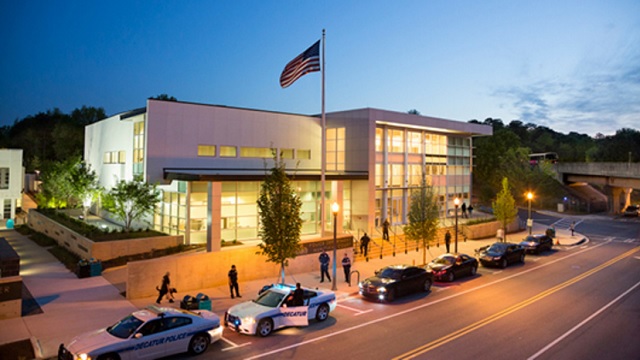 The city of Decatur Police Headquarters at the Beacon Municipal Center. Photo obtained via http://www.decaturga.com/
Share

The city of Decatur Police Headquarters at the Beacon Municipal Center. Photo obtained via http://www.decaturga.com/

An incident involving the arrest of a Decatur Police Officer for DUI has come to light after two other officers were forced out of the department over $7 found in a patrol car.

Those officers were reinstated on Nov. 15, but demoted. The officer arrested for DUI three years ago was placed on administrative leave and demoted at the time, according to Police Chief Mike Booker.

Booker was unable to go into detail about why the officer arrested three years ago did not face the same threat of termination as the officers accused of mishandling $7.

“There’s really not a standard response,” Booker said. “Each thing that occurs is separate and individual on its own. What happens when an accusation is brought to us, the standard practice is you’re placed on administrative leave pending the outcome of the investigation.”

One June night in 2013, the Walton County Sheriff’s Office and the Georgia State Troopers were conducting a road safety check when a Nissan Murano drove up.

Mark Hensel, then a city of Decatur Police lieutenant, rolled down his window. Officers detected a strong odor of alcohol. Hensel told the officers he’d just had a few drinks at the Atlanta Braves game, which had begun at 4:30 p.m. It was 12:35 a.m. when officers stopped him, the police report notes. Hensel informed the officers that he worked for the Decatur Police Department and held the rank of lieutenant.

Hensel initially declined to take a breathalyzer test, but later took the test showing he was over the legal limit. Hensel refused to perform the standardized field sobriety test, however, and was arrested for a DUI.

The charge eventually was reduced to reckless driving and Hensel was allowed to remain with the Decatur Police Department. The department cut his pay by 7 and a half percent. Booker said Hensel was demoted to a Master Patrol Officer and was unable to drive a patrol car until his probation was over. He was suspended without pay for 80 hours and couldn’t participate in any promotional testing for two years.

Booker said Hensel notified the department immediately about the incident.

“If he didn’t do that, he’d be in violation of our code of conduct,” Booker said.

Officer Eric Jackson, a lieutenant until now, and Officer Joshua Speed gave the same version of events. On Oct. 11, Speed was conducting an inspection on a police car in search of a missing microphone for an in-car video camera. In the process he found $7 under the driver’s seat.

Speed said that without really thinking it through, he gave $2 to Jackson and kept the remaining $5. Another officer suggested filing a report, but Speed decided to locate the officer who owned the money personally because he said doing the paperwork on it would be an administrative headache.

Speed said he didn’t consider the implications of giving Jackson the $2 because officers give each other small amounts of money routinely for buying coffee, lunch and other small expenses. Jackson, whose wife is pregnant with their first child, said he didn’t really think about the implications of taking the $2 either, saying he had, “too much other crap on my mind.” He acknowledged that taking the $2 was improper.

Speed has been an officer for nearly eight years and had never had any problems.

Jackson raised the issue of racial discrimination by the department in its treatment of him compared with the department’s treatment of Hensel, who is white. While both men received the same punishment, Jackson was first forced to resign under threat of being fired, records show.

A hearing officer found that both terminations were justified and found no evidence to back up Jackson’s claims of discrimination. The officer noted that a DUI conviction “would have been an offense for which termination was warranted” and pleading guilty to a lesser charge saved Hensel’s job.

“Two officers [Jackson and Speed] were terminated for this series of actions, one white and one African American,” the hearing officer wrote. “Of the two, the supervisor, Jackson, was responsible for setting a good example and preventing subordinate officers from deviating from city policy. No pattern or practice of racial discrimination was established at [the] hearing.”

At issue for both men was a departmental policy stating that no officers can lie, cheat or steal.

“As to whether Jackson has been treated differently than other officers, … Chief [Booker] testified there have been no exceptions to his ‘lie, cheat, steal’ policy,” the hearing officer wrote. “He has never allowed anyone to keep their job if allegations of that nature are proven.”

During the investigation into the incident, Cpt. Kris Boyett raised the possibility that the money was left in the patrol car as an “integrity test” for the two officers, the hearing officer’s reports say.

The report says, “In response to whether this could have been an integrity test, Jackson’s response according to Boyett was, ‘If so, I failed miserably.'”

The testimony conflicts about whether Jackson pocketed the money with any intention of lying, cheating or stealing.

“In many ways Eric Jackson paints a sympathetic picture,” the hearing officer wrote. “He was well respected. He appears genuinely distressed by his actions as well as genuinely remorseful. In his words, he has  owned up to his conduct. As hearing officer, I find that Jackson’s intent to retain the money  for his own use has not been  clearly established under the facts of this case. Certainly, at the scene of the call the previous night, it appeared  he was appropriating the money to his own  use; however, his subsequent actions are to the contrary. While this may be a case of remorse over getting caught as the Chief believes, the department carries the responsibility of proving a criminal offense to the extent it forms the basis for disciplinary action; and I do not find the department carried  its burden.”

The hearing officer was more certain about Speed’s actions.

“The evidence is undisputed that Joshua Speed came into possession of $7 as part of his police duties (police action) and that he converted that money to his personal use by dividing it with his lieutenant, concealed it on his person, and removed it from the department at the end of shift, in violation of departmental policy,” the hearing officer wrote.

While the hearing officer upheld the termination of both police officers, City Manager Peggy Merriss disagreed with that conclusion and decided to reinstate the two men, with demotions and pay cuts. Both men will have to apologize to Chief Booker and will complete ethics training, as part of their reinstatement.

Booker said the department spoke to the officer accused of writing too many citations to black drivers, the one who initiated the case against Speed and Jackson. Booker said he is also aware about the lack of black officers in leadership positions within the department.

“We work in a diverse community and we would like to try to mirror that as best we can with our department,” he said.

The case had attracted the attention of the recently-formed Decatur branch of the NAACP. Mawuli Davis, co-chair of the local NAACP and a local defense attorney, had asked the city to reinstate Jackson.

After the officers were reinstated, Davis told Decaturish, “While it is unfortunate that this issue escalated to this level, the members of the city of Decatur NAACP are hopeful that the reinstatement of these officers allows us to continue building our city on the principles of justice and equality we all believe in.”