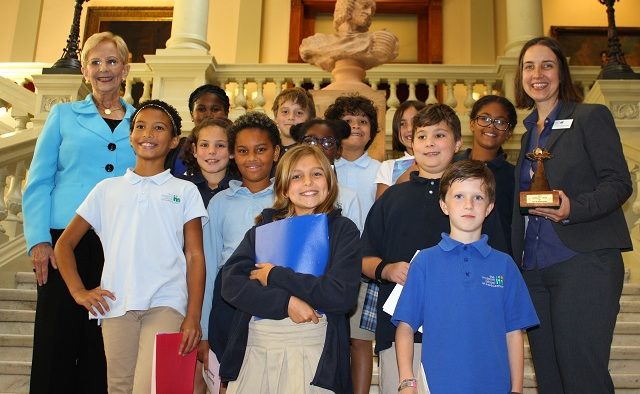 File photo: Students from The Museum School of Avondale Estates, Principal Katherine Kelbaugh (far right) and First Lady Sandra Deal celebrate the school being named a recipient of the 2016 Governor’s Awards for the Arts and Humanities during a ceremony at the State Capitol on Oct. 5, 2016. Selected by a panel of prestigious judges, the award recognizes the school as an organization that has made significant contributions to Georgia’s civic and cultural vitality through service to the humanities or excellence in the arts.
Share 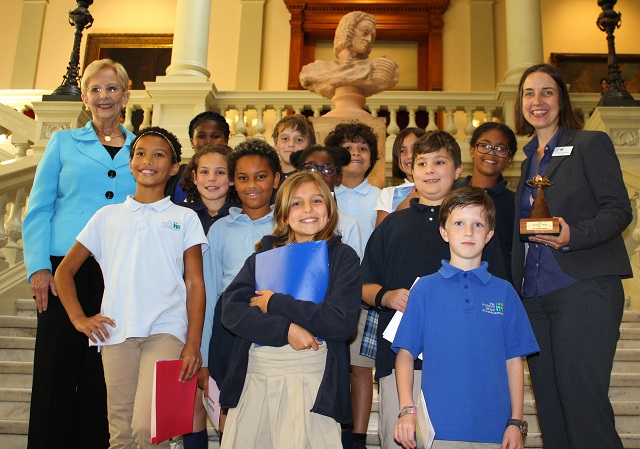 Students from The Museum School of Avondale Estates, Principal Katherine Kelbaugh (far right) and First Lady Sandra Deal celebrate the school being named a recipient of the 2016 Governor’s Awards for the Arts and Humanities during a ceremony at the State Capitol on Oct. 5, 2016.

The Museum School of Avondale Estates is good to go as a charter school for another five years, provided the state agrees with the DeKalb County School Board’s decision.

The School Board approved a renewal petition for a five-year charter extension on Nov. 7. It will now go to the State Board of Education for approval. A decision is expected in the spring of 2017, the Museum School reports.

“We have two new additions to our now DeKalb BOE-approved charter,” Museum School Board Chair Andy Huff said in a letter to parents. “Our charter now includes an added academic goal that focuses on increasing the number of students who score ‘proficient’ or ‘distinguished’ on the Georgia Milestones test.  Our charter also includes goals that seek to increase diversity across our student, staff and board populations.”

The school serves 588 students in Kindergarten through eighth grade. While the memo to the School Board about the charter renewal praised the school’s performance, it said the school needed to improve the diversity of its student population.

The school district’s Raters’ Committee said that during the review process, the school only received sufficient points to warrant a recommendation of approving the petition.

“The most significant factor contributing to this score was that the school presented a relative lack of diversity in the student body and governing board as compared to the District as a whole, specifically in the federal category of Economically Disadvantaged,” the memo to the School Board says. “Charter schools, according to the federal Charter School Program (CSP) grant now being implemented in Georgia, should reflect their school district in federal categories. A newly approved state law allows the use of a weighted lottery process to ensure charter schools can achieve this federal expectation.”

1) The petition’s diversity goal should reflect a 4 percent annual increase in the percentage of students who are classified as economically disadvantaged.  The 4 percent rate will mean approximately 12 economically disadvantaged students, in addition to the school’s historic trend of approximately 22, should be admitted annually using a weighted lottery approach.  The school would be allowed to admit less than that 4 percent target if the federally allowed enrollment priorities for siblings and children of employees and board members has made the 4 percent target mathematically impossible.

2.  The petition identifies a neighborhood primary attendance zone.  If in any given year, it was possible for the school to meet the 4 percent target and it did not do so, in the following application period the school will expand its primary attendance zone to admit students from the entire DeKalb County School District.  This aligns with Board charter policy, revised in 2015, which identifies the “community” as the school district in its entirety.