Intersection closure and detour planned in downtown Decatur this week

Intersection closure and detour planned in downtown Decatur this week

The intersection of North Candler Street and East Howard Avenue will be closed through Wednesday, Nov. 16, to accommodate installation of a new water line. There will be a planned disruption of water service in the area.

There will also be detours on Ponce de Leon for crosswalk construction starting on Nov. 16.

According to the city, the work at the North Candler and East Howard Intersection “is part of the Downtown Decatur Storm Drainage Improvements.”

The city is installing a new “raised mid-block crosswalk” in the 200 block of East Ponce de Leon Avenue near North Candler Street. The city will also install a “raised speed table” over the entire intersection at Clairemont and Ponce de Leon Avenues.

“Vehicles will have to detour around these intersections from Thursday, Nov. 17, through Wednesday, Nov. 23, weather permitting, to allow the concrete to be placed and harden,” the city says. … “The 100 block of Clairemont Avenue and Ponce de Leon Avenue between its two intersections with Commerce Drive will be limited to local traffic only during this period. Detour routes will be marked to guide residents and visitors around downtown Decatur using Commerce Drive, but East Court Square and on-street parking will remain open during construction.”

Here is a map of the planned detours: 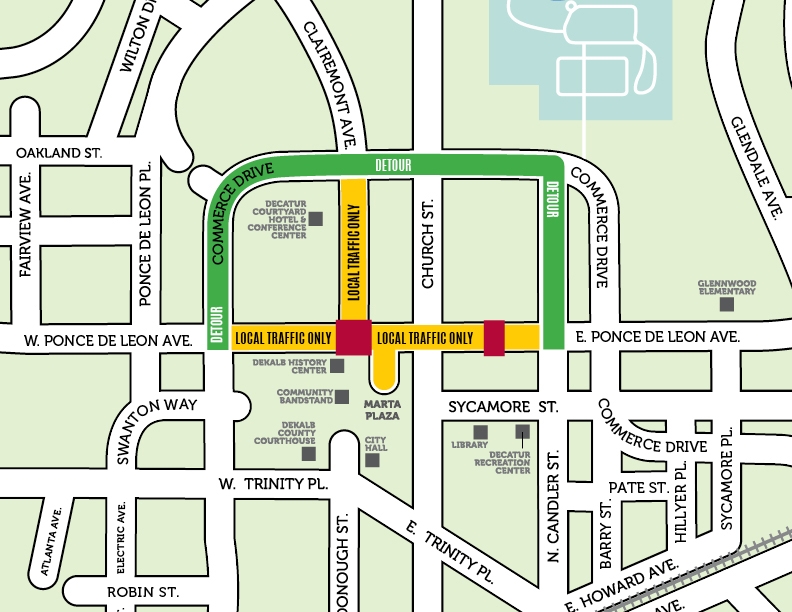 “All sidewalks will remain open during the duration of construction,” the city says. “We encourage visitors to park and walk to their favorite restaurants and retail establishments.”

The city says its downtown crosswalk replacement program will include six cross walks along East and West Ponce de Leon avenue and one in the 100 block of East Trinity Place.

“Pedestrian crosswalk ramps and asphalt paving have already been installed,” the city says. “Once preliminary concrete construction is finished, bright, bold and decorative designs for the thermoplastic markings will be installed on all of the crosswalks to complete the project.”