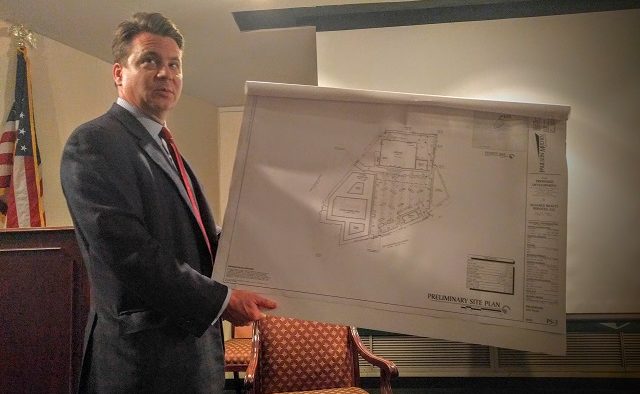 Attorney Den Web shows a site plan during a Nov. 2 meeting at the Decatur Library. Photo by Dan Whisenhunt
Share 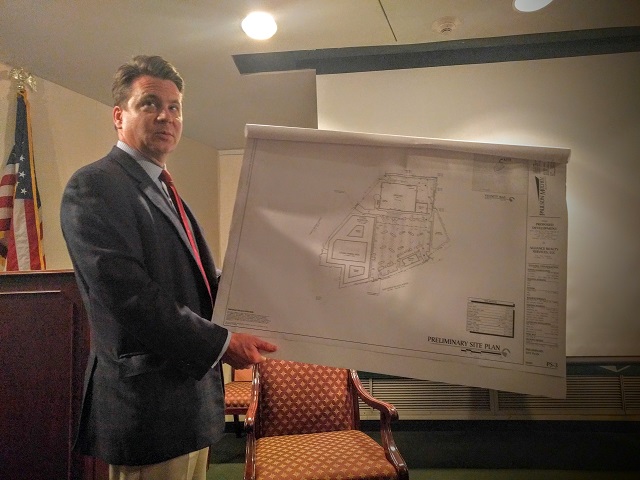 Attorney Den Web shows a site plan during a Nov. 2 meeting at the Decatur Library. Photo by Dan Whisenhunt

The owner of a pet crematory business on East Ponce de Leon Avenue made it clear that she would be steadfastly opposed to apartments moving in next door.

A developer, Alliance Realty Services, is proposing to redevelop 9.7 acres at the intersection of North Arcadia Avenue and East Ponce de Leon Avenue into a mixed-use apartment development with 250 units. The area is currently home to more industrial uses, like auto repair shops. The developer’s attorney, Den Webb, spoke to a small group that had gathered at the Decatur Library on Wednesday evening to discuss the project. Webb said the rezoning application would be filed in January at the earliest.

Webb said there would be a five-story apartment building with parking wrapped around it, and a grocery store anchor tenant, rumored to be a Publix, though Webb would not say for sure.

Christine Hunsaker, the pet crematory owner, said she was against residential properties encroaching on industrial areas. The owner of local strip club Pin Ups would also be opposed, she said.

“I’m absolutely against it,” she said. “We moved our business there for the purpose of being in an industrial zone.”

She said inviting people to live nearby would inevitably invite complaints about her business and others in the area.

“Those of us who have chosen to put their businesses in the appropriate zoning don’t want residences around us,” Hunsaker said.

Webb said the developer wouldn’t be doing anything that would affect the zoning of property around the proposed development.

“This is America,” Webb said. “It’s a property rights country and I certainly believe in property rights, and nothing we’re doing will impact your property.”

More advanced details, like a plan for traffic and plans for pedestrian access were not yet available for the project, Webb said. There would be roads on the property that would have to be abandoned, and that would require a public hearing, he said.

Jack Wilcox and George Chase, the partners with Alliance Realty Services, said the firm had built some luxury condos across from the Atlanta Botanical Gardens and completed a retail center in downtown Chattanooga. The company doesn’t have a website with a list of its projects, the men said.

Decaturish asked the two about the viability of putting another grocery store in the area when several already exist, with two on the way: a Whole Foods 365 store and a Sprouts Farmers Market slated for the area around North Decatur Road and Church Street.

Chase replied that the grocery tenant wants to be in this location.

“They have their formal approvals to go through. They’re on board,” he said. “The more competition you have for the groceries, the better off the customer is.”

The parcels at the site have been eyed for annexation by the city of Decatur in the past, but city officials say the city currently does not have an annexation map. The city has, however, been annexing parcels on an individual basis to clean up its boundaries, bringing property that has split jurisdiction with the county into the city limits.