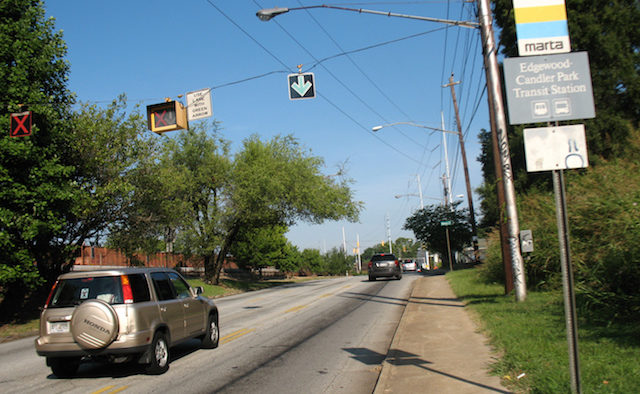 Potholes and the infamous DeKalb Avenue “suicide lane” will both be on the agenda Thursday evening at a public meeting to discuss the future of the street.

Organized by the Atlanta Bicycle Coalition, the meeting invites everyone to come be part of a lively conversation.

“DeKalb Avenue is riddled with potholes, has an outdated and dangerous reversible center lane (aka ‘suicide lane’), lacks bike lanes and backs up at key intersections due to the lack of turn lanes,” their website says. “Come find out what’s possible for DeKalb Avenue.”

In 2015, Renew Atlanta placed the high-traffic street on its list of “Complete Streets,” which means making it a more integrated part of a walkable, bikeable community. The changes would be funded with the Renew Atlanta bond.

Improvements – in addition to changing the reversible lane – could include adding turn lanes at key intersections, repaving the street, adding bike lanes or a multi-use path and creating safer crossings.

The city is also exploring whether the PATH trail to Decatur could be extended along DeKalb Avenue to connect with the BeltLine.

“These simple changes would transform a dangerous street into a safe connection from Decatur to the BeltLine and Downtown Atlanta,” the website says.