DJ Presyce cutting it up on the 1s and 2s always draws a crowd. Photo provided by Scratch DJ Academy
Share 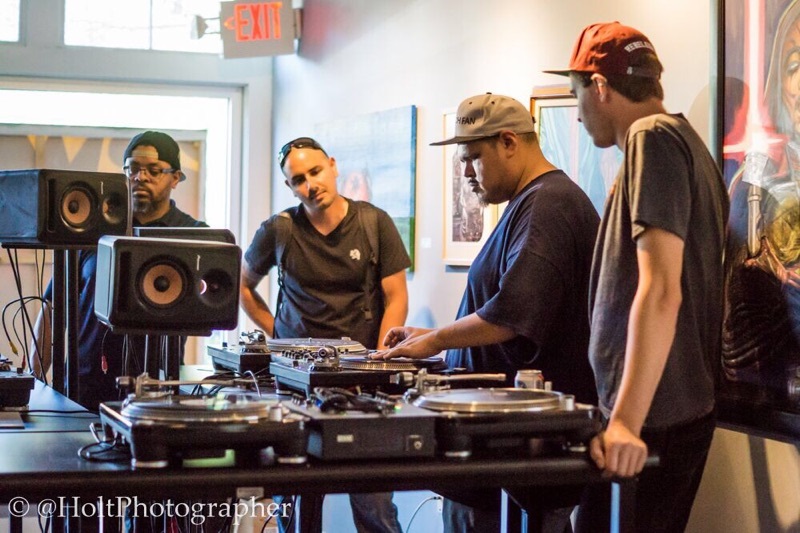 DJ Presyce cutting it up on the 1s and 2s always draws a crowd. Photo provided by Scratch DJ Academy

Kirkwood, a thriving and diverse Atlanta neighborhood, has proven an ideal home for an a unique kind of school: Scratch DJ Academy.

“The teachers we hire are influences [in the industry] and they have a right to be here,” he said.

Scratch’s curriculum is copyrighted and traces its origin to 2002 when the academy was founded by Jam Master Jay of the legendary hip hop group Run-D.M.C. Kirkwood’s academy is part of a larger network of learning institutions with locations in New York, Chicago, Philadelphia, Los Angeles and Miami.

The Kirkwood studio features local artwork in an intimate setting. The program is constantly refining its curriculum and fine-tuning its programing. Cervantes added that an assembly of Scratch directors representing the network of schools met as recently as June 2016 to improve teaching technique and course material.

Cervantes is a native of Chicago and an expert DJ. He learned by watching relatives and friends.

“I started DJ’ing back in ’93,” he said. “I started by collecting records. I was just repeating what I saw my brother doing and picking up from what I saw at parties.”

Although Cervantes appreciates his opportunities to learn by apprenticeship, he is whole-heartedly in favor of the Scratch structure of mentorship and training.

“I recommend [the curriculum as a] better and more consistent way of doing things,” he said.

Cervantes encourages prospective students of even the most inexperienced backgrounds to pursue their curiosity and interest in DJ’ing.

“We start with simple concepts…the turntable, hardware to software and how to make a programming set,” he said.

Like most art forms, novices must learn all the fundamentals to build a solid foundation from which they can grow creatively and express themselves as individual artists.

“You have to know the rules first and then you figure out how to break them,” Cervantes said.

The classes number in size from five to eight students.

Cervantes said these classes build camaraderie, community and confidence by providing a safe place to learn, fail and succeed.

“[In class,] you can feel OK messing up…you will learn how to fix anything that goes wrong,” he said.

Cervantes sees students, especially young people, gain appreciation and value for structure, develop focus and improve in other academic areas such as counting.

In addition to group classes and private lessons, Scratch offers summer programs for students ages 10-16 and will launch an after school program in 2017. Cervantes said his students range in age from 9 to 72, and his classes are diverse.

Cervantes said, “Women are definitely a presence in DJ’ing. There are lots of avenues and areas women and men alike can explore and step into.”

Andrews also invited anyone interested to “come take a look at the studio and see someone do a demo. Sometimes it sparks a fire.”

Andrews, a former grant writer, has a passion for DJ’ing and loves to see people developing their craft and showcasing their talents.

In addition to classes, Scratch hosts events that promote a sense of community among music industry professionals and community members.

“Scratch is doing lots of good things in Atlanta and lots of exciting things are coming in the future,” Lopez said.

Lopez said Scratch values the foundations of DJ’ing but also embraces progress and the technology it brings. Scratch staff is promoting the newest advancements in the field, including the Ableton Link which enables synchronization of multiple applications on different devices.

Veteran DJ and Scratch instructor, DJ Jaycee, Jayson Reid, said the fundamentals are just as important as the latest trends.

“I like to give students a history of where sounds originated from…people often don’t know the origin,” he said.

Reid teaches Scratch students in Atlanta with expertise that, like Cervantes, was acquired through persistence, observation and practice – lots and lots of practice, Reid said.

While Reid recognizes the value of technology in mixing, he recounts how 30 years ago, anyone interested in the art of DJ’ing had no route to learning except existing peer relationships and observing other DJ’s perform.

Reid is grateful that in 1984 his burgeoning interest in DJ’ing was fostered and enabled by his community.

“I watched people and I had some hands on experience…four or five friends in my neighborhood in Decatur with turntable set-ups,” he said.

These modest beginnings helped transform Reid from a mere “fan of hip hop” into a professional DJ with a lengthy resume.

From performing and touring with Ludacris to opening for the legendary Run DMC, his achievements include world tours and televised award shows. He’s performed on many top television broadcasts including The David Letterman Show, The Tonight Show with Jay Leno, and later, Jimmy Fallon, TRL, the VMAs, and, even the Grammy’s.

In alignment with the Scratch philosophy, Reid says he lays down the fundamentals, teaches the structure of the art form and empowers the DJ’s in training to experiment.

Reid’s role as instructor is an example of stepping into a new opportunity and continuing to grow your career. In fact, Reid’s path to teaching can be traced back to 2002 when the first Scratch Academy opened. According to Reid, Jam Master Jay invited him to come check out the Academy; however, Reid never had the opportunity and Jam Master Jay passed away that same year.

Years later, Reid was introduced to Scratch’s brand director, DJ Hapa through DJ Rasta Roots. Although reluctant to take on the role of teacher, Reid said, “I’ll think about it.”

Finally, in February of 2014, Reid became an Academy instructor. According to Reid, he finally agreed because he wanted to share his knowledge and experience with a new generation of DJ’s. “It boiled down to me wanting to pass down what I learned to people who are serious about [DJ’ing].”

Reid’s professional accomplishments are enough to make any artists feel validated, but rather than rest on his accolades, Reid keeps pursuing new dreams. With goals to produce and a thriving teaching gig, Reid is far from shelving his turntables.

For now, he’s investing in up and coming DJ’s and sharing his expertise and wisdom. To aspiring DJ, Reid said, “Practice! You get out what you put in. Everything you put in you get back tenfold.”