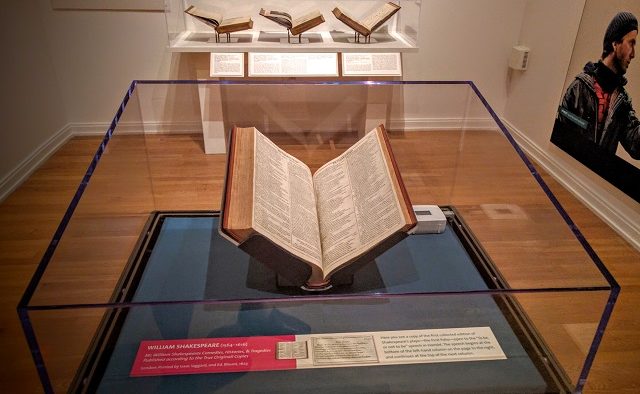 The First Folio on display at the Carlos Museum at Emory University. Photo by Dan Whisenhunt
Share 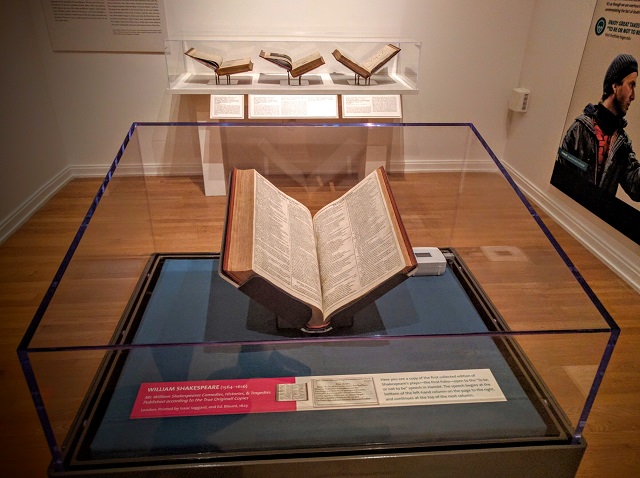 The First Folio on display at the Carlos Museum at Emory University. Photo by Dan Whisenhunt

In 1623, actors John Heminge and Henry Condell, decided to compile the work of their late friend William Shakespeare into one volume.

It was a decision that would have tremendous implications not just for the western literature, but the English language. What became known as the First Folio contained 36 plays, including 18 that had never been printed. The first print-run produced about 750 copies. It is perhaps no coincidence then that the Folger Shakespeare Library, which owns 82 of the estimated 233 surviving copies of the Folio, loaned 18 of them to be displayed throughout the country to commemorate the 400th Anniversary of Shakespeare’s death.

One of them landed at Emory University’s Michael C. Carlos Museum, where it will be on display from Nov. 5 through Dec. 11. Admission to see the First Folio gallery is free and the museum is located at 571 South Kilgo Circle, Atlanta, GA 30322.

Emory’s borrowed copy of the Folio is shielded in a temperature controlled glass case, opened to the page that contains “Hamlet’s” famous speech, “To be or not to be.”

“The Taming of the Shrew“

During a sneak preview on Nov. 4, professors and the museum’s assistant curator gathered around the book like family doting on a newborn child. Each folio has its own history, but for security reasons, Emory was not told which specific folio it had received.

“The Folger is a non-circulating library,” Emory English professor Sheila Cavanagh said. “This was an unusual initiative on their part.”

While the Bard is no longer with us, his work lives on and is indeed almost inseparable from the English language itself.

Without Shakespeare, you wouldn’t be able to “break the ice” during an awkward silence, or say “good riddance” when the guest causing the awkward silence decided to leave. Reporters wouldn’t be able to go on a “wild goose chase” to track down a lead that doesn’t pan out, or “play fast and loose” with the facts. Alabama winning football games would not be a “foregone conclusion.” Love would not be blind and no one would be a “laughing stock.” And when you love, you could not say, I “wear my heart upon my sleeve” and it wouldn’t be a “heart of gold.” You couldn’t say your child will “eat me out of house and home.” Articles, speeches and essays would be longer without the sage advice that “brevity is the soul of wit.” And when your time on this earth had ended, you would not be “dead as a door nail.”

Even the simple “knock knock” joke would a casualty if Shakespeare’s contemporaries had not had the foresight and the profit motive to publish the book that is now on display at the Carlos Museum. 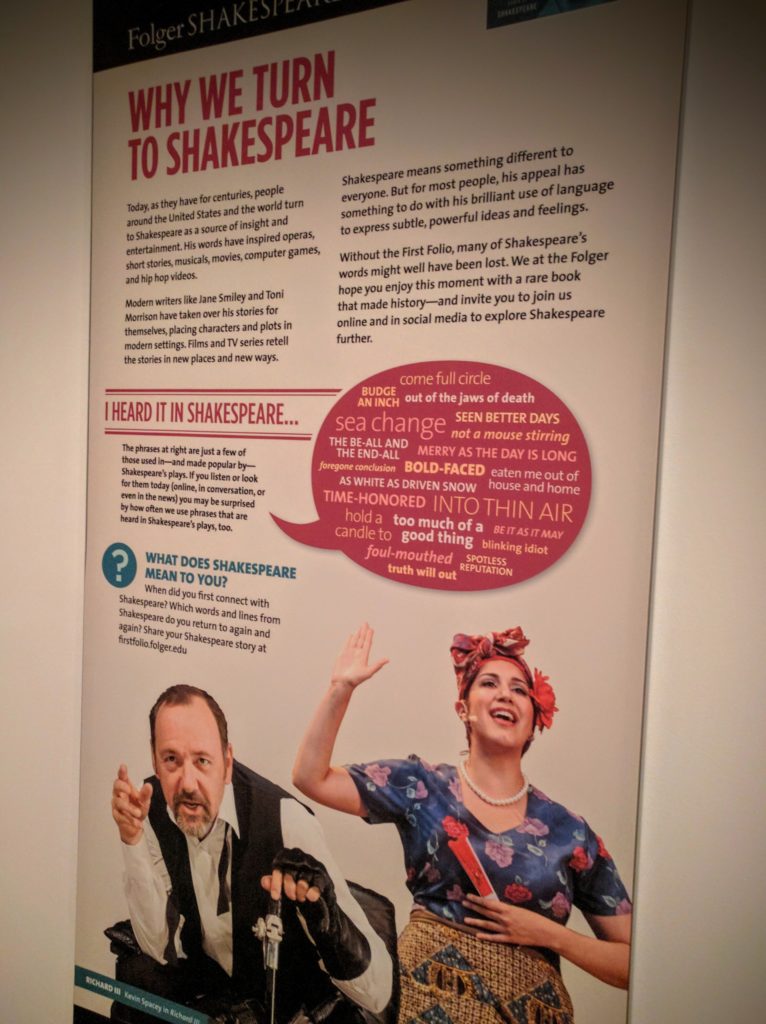 This poster on display at the Carlos Museum illustrates the influence of Shakespeare on the English Language.

The 900-page Folio would’ve cost $250 in today’s dollars, a small fortune in 1623. The bindings usually cost extra, and the one in Emory’s possession has a newer binding.

The exhibit features later editions of the Folio, known as the second, third and fourth, respectively, that belonged to Stuart Rose and Rose’s namesake library at Emory.

These later editions, intended to one-up the previous work, included plays that were Shakespearean but clearly not written by Shakespeare, according to Justin Shaw, an Emory University graduate student. With scholarly authority, Shaw explained that while every known edition of the First Folio has been researched and cataloged, less is known about the subsequent works of Shakespeare’s collected plays.

“That’s starting to change,” he said.

Emory University has lit up with celebration over the arrival of the treasured tome.  There will be theatrical performances, poetry readings and film viewings. For a full list of events, visit: http://shakespeare.folio.emory.edu/

First Folio scholars can give you a granular detail on most of the existing copies, who the typesetters where, where the typos and watermarks are, the individual history of who possessed the books and when. In some manuscripts, even shadows of the editing process are present, like named characters that don’t appear in the final draft, which are referred to as “ghost characters.”

While it is certain Shakespeare’s friends thought his work worthy of preservation, it’s unlikely they had any inkling of how influential his work would be 400 years later.

The First Folio will be on display from Nov. 5 through Dec. 11. Admission to see the First Folio gallery is free and the museum is located at 571 South Kilgo Circle, Atlanta, GA 30322.

The museum’s hours are:

(Closed on Mondays and university holidays)