Burrell Ellis will receive more than $200k in back pay, says he’s ‘savoring the moment’

Burrell Ellis will receive more than $200k in back pay, says he’s ‘savoring the moment’ 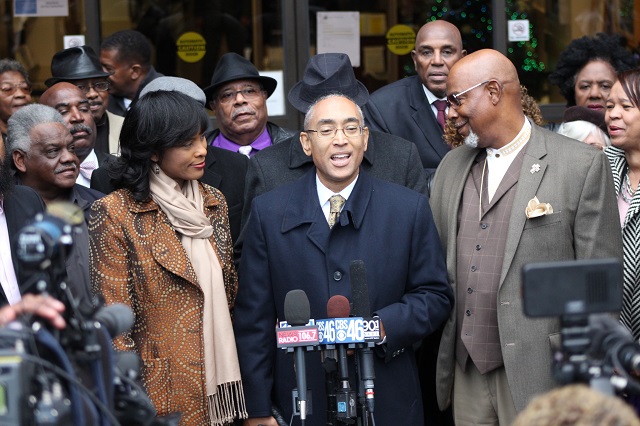 Burrell Ellis is back.

Ellis did a victory lap of sorts on Dec. 14 after officially returning as DeKalb County’s CEO, albeit for a limited time only. He returned to work on Dec. 12 and his term ends Dec. 31. He held a press conference Wednesday. U.S. Rep. Hank Johnson and former county CEO Vernon Jones were there to greet him, 11 Alive reports.

Ellis was suspended in 2013 after being indicted on corruption charges. He was convicted in 2015 and served his sentence. But the state Supreme Court recently ruled that evidence that could’ve supported Ellis’ claims that he didn’t routinely shakedown vendors was improperly excluded from trial.

The ruling resulted in Ellis’ reinstatement as CEO. The Atlanta Journal Constitution said the county will pay Ellis $222,556 in back pay, money he is owed now that his conviction has been overturned.

In a press release, Ellis said, “I’m savoring the moment, enjoying the day and can’t wait to be among the constituents. We’re going to be sure the trains run on time, be prepared for any emergency and ensure a smooth transition.”

The press release says Ellis will spend his remaining few days focusing on the county’s 2017 budget and getting this ready for his successor, Michael Thurmond.

According to 11 Alive, Ellis did not rule out a return to politics, saying he will “move as God directs.”