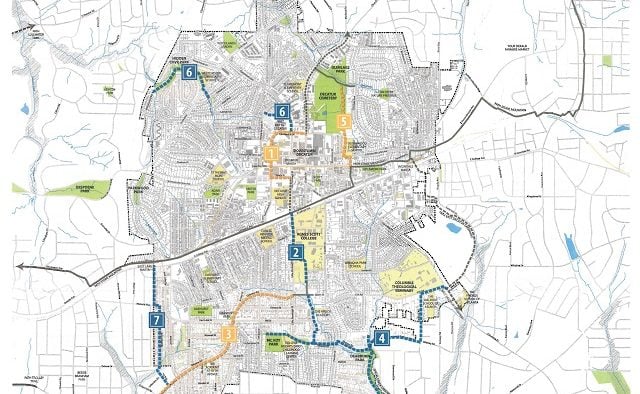 Decatur City Commissioners will consider approving a PATH connectivity plan, estimated to cost $12 million, at its meeting on Dec. 19.

The plan identifies 9.2 miles of bike and pedestrian trails to be built in seven segments over the next 10 years.

It recommends building the Commerce Drive Cycle Track as the first segment. The proposed track will provide a connection with two city-approved bike and pedestrian improvements: the North McDonough Streetscape  project and the Church Street Cycle Track.

The plan was prepared by the PATH Foundation and a steering committee made up of city of Decatur residents and employees.

Here are the maps showing the proposed trail segments (click each image to enlarge): In other business, the City Commission has received a request from City Schools of Decatur for an exemption from the city’s High Efficiency Building Standards.

Renovations to Decatur High and Renfroe Middle are currently underway. CSD Superintendent David Dude said in a memo to commissioners that the standards would place an “undue hardship” on the school system.

“CSD began the planning for the above-referenced construction projects in 2013,” the memo says. “CSD undertook its design and planning of the two projects under the previous city ordinances and did not design or budget to meet the requirements of the HEBS, which became effective in February 2015, long after the planning for the projects had commenced. Our projections indicate that to change course now to meet the HEBS certification requirements would result in an approximate total cost of $1.5 million on these two projects. None of that additional expense would be reimbursable from State of Georgia Department of Education capital outlay funds.”

The Dec. 19 City Commission meeting begins with a work session at 6:30 p.m. with the regular meeting starting at 7:30 p.m. It will be held at City Hall, located at 509 North McDonough Street. All meetings are open to the public.