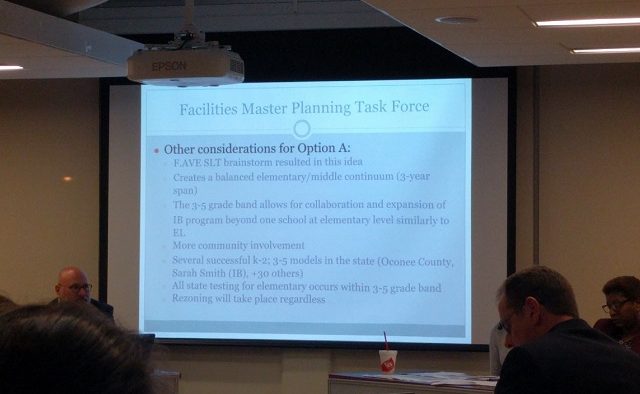 The School Board heard a presentation from the Facilities Master Planning Task Force on Dec. 12. Photo by Dan Whisenhunt
Share 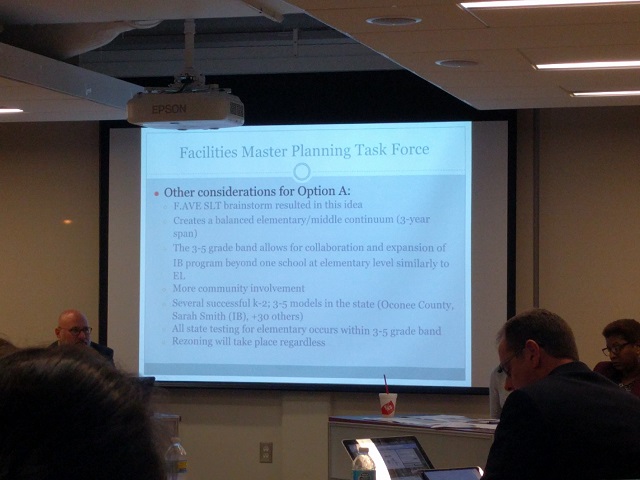 The School Board heard a presentation from the Facilities Master Planning Task Force on Dec. 12. Photo by Dan Whisenhunt

A task force created to study City Schools of Decatur’s long-term building needs presented two options to the School Board on Monday.

The first option would reconfigure CSD’s K-5 schools into a group of three year schools: five K-2 schools and three 3-5 schools, in addition to Renfroe Middle and Decatur High. The second option would keep the current configuration of K-3 schools and build an additional 4/5 Academy on CSD-owned property at Talley Street.

Both options have a ways to go before the School Board formally adopts one, if board members even decide to adopt either plan.

“We will have the board vote on this eventually,” Superintendent David Dude told Decaturish after the meeting. “If we could do it by February, that would be fantastic. It would help us keep on schedule, but we’ll see. It’s more important to do it right.”

The reconfiguration of the K-5 schools received more attention during the meeting. One of the perennial debates in Decatur is whether CSD should ditch its 4/5 Academy at Fifth Avenue and return all of its elementary schools to K-5 status. Under the reconfiguration proposal, Clairemont, College Heights, Glennwood, Winnona Park and Westchester would become K-2 schools. The 4/5 Academy, a new school on Talley Street and Oakhurst Elementary (or another school) would become 3-5 schools. All of the plans envision keeping Decatur’s early learning program, currently housed at College Heights, but recommendations for that program are being handled by another task force, Dude said.

The superintendent said the K-2/3-5 model is used in other school districts.

“K-2/3-5 is a very common split in the education community,” Dude said. “K-2 is kind of seen as the lower elementary and 3-5 is seen as the upper elementary, and that’s not unusual at all to have that split.”

The presentation makes the following arguments in support of the K-2/3-5 idea:

– All state testing for elementary occurs within 3-5 grade band

– Rezoning will take place regardless

Dude noted that the state’s College and Career Ready Performance Index scores are only calculated in grades three through eight. CSD’s current configuration caused its CCRPI scores for 2015 to drop.

“My understanding is that it is very expensive and extremely inefficient to change building systems back into K-5,” she said. “Given the time and budget we have in place, that’s not something that’s really a viable option.”

The second option, known as Option B, more or less maintains the status quo by adding a new 4/5 Academy. Chief Operating Officer Noel Maloof noted the new 4/5 would have less capacity than the current 4/5, seating about 120 fewer students.

“We don’t have the money set aside to build a building as big as F.AVE is now,” he said.

Here is the presentation from Monday’s meeting: