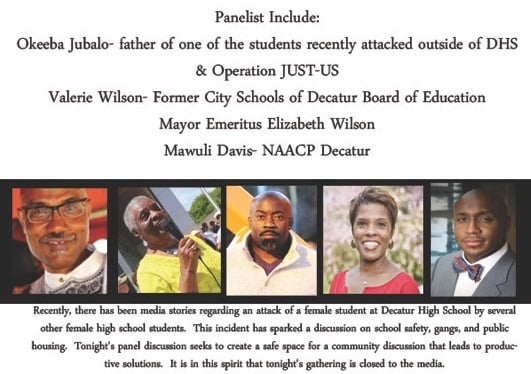 A portion of the flyer showing the panelists for the Dec. 19 event.
Share

A portion of the flyer showing the panelists for the Dec. 19 event.

A community meeting about inequality in education and violence at City Schools of Decatur included raised voices, disagreements, tears and lots of hugs. It ended with a promise to focus on working together and building community support.

The Decatur NAACP organized the meeting Monday evening to discuss issue, but also to address concerns about a recent fight at Decatur High and comments made after the fight. Dozens of parents, high school students, recent graduates and a few Decatur School staff filled the room at Ebster Gym.

It was a meeting that was supposed to be closed to the media, but the Decatur NAACP allowed Decaturish to attend after the meeting was publicized in an Atlanta Journal Constitution article.

The group discussed a report Superintendent David Dude presented at a school board meeting in October showing an achievement gap for black students. The report also showed black students are disciplined at a much higher rate than white students.

According to the report, inequality in student achievement and discipline is not a new phenomenon in City Schools of Decatur. The problems persist.

“In 2015-16, a Black student in CSD was eight times more likely than a White student to be cited for rude/disorderly conduct,” the report says.

Here is a copy of that report:

The two-hour meeting had some tense moments and heated discussion about a fight that took place outside the Decatur High School on Nov. 10. Jubalo, who says his daughter was attacked in the altercation, posted comments on Facebook after the fight calling some of the students involved “ghetto rats across the tracks.” Jubalo said he was upset about what happened to his daughter and frustrated that the school administration had not addressed the issue.

Several parents and recent graduates told Jubalo they found his comments hurtful. One mother, who lives in public housing, talked about moving out of her house and into public housing so her children could attend Decatur schools.

Several women sitting next to her leaned over and hugged her, and the entire group applauded her remarks.

Another parent said she felt the group need some restorative justice after the incident.

“There were lots of people hurt by your words, and we know that words hurt,” she told Jubalo. “I know you have done lots of community work, but that doesn’t dismiss how you hurt those people.”

Jubalo did not directly apologize for his comments at the meeting, but said he would be glad to speak one-on-one to anyone he hurt or offended. He also said an article in Decaturish had taken his comments of context.

“If anyone is offended by me, get to know me,” Jubalo said. “I’m about us all day long. I’ll do a one-on-one and apologize.”

Quite a few people who spoke told Jubalo they were sorry to hear about the attack on his daughter and were outraged it had happened. It was something no student should experience and something they would all join together to stop from happening again, they said.

Davis and Wilson urged the group to come together and work to solve the problem. Davis said it was important the recognize that the people who were hurt by Jubalo’s comments also wanted to focus on changing problems in the school system.

“It’s not mutually exclusive. Both can happen,” he said.

“I just want to see us come together and respect each other,” Wilson added. “We all need to heal from this and let it go. The main focus has to be coming together for our kids.”

Davis said the NAACP had sent a letter to Dude asking for action to address the problems raised in his report about student discipline. The group discussed the need for everyone to become more involved in the school system by attending meetings and volunteering, but also by demanded systemic change. Hiring more black teachers and teaching cultural competency were two changes discussed.