(PHOTOS) – A rally for solidarity in Oakhurst

(PHOTOS) – A rally for solidarity in Oakhurst 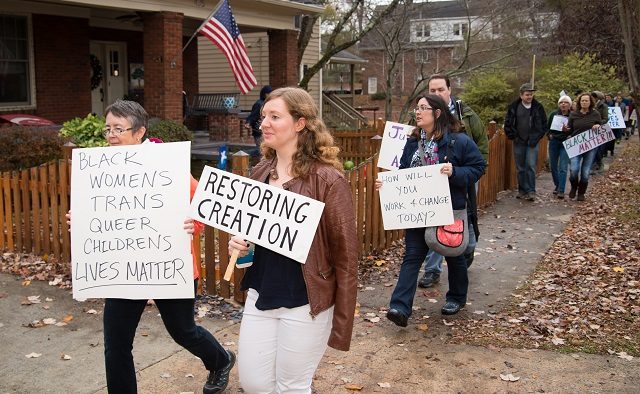 One hundred people gathered in Oakhurst’s Harmony Park on Sunday, Dec. 18, for a rally to address concerns about injustice and oppression. The rally was organized by Create Community 4 Decatur: Black Lives Matter (CC4D:BLM) and a coalition of justice-focused organizations. Participants marched to the park from Oakhurst Baptist Church, Oakhurst Presbyterian Church, and the Atlanta Friends Meeting of the Religious Society of Friends.

Speakers representing diverse groups encourged those attending the rally to work together in the fight for social justice and create a supportive community. CC4D:BLM will be meeting on the third Tuesday of each month. Their next meeting will be held on Tuesday, January 17, 2017 at Oakhurst Presbyterian Church, 118 2nd Ave, Decatur, GA 30030. 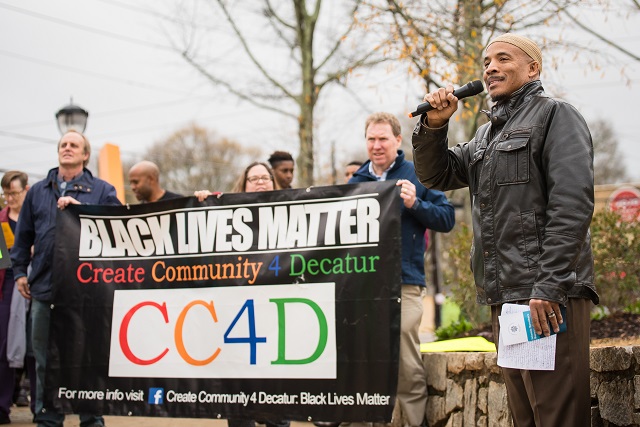 R. Tariq Abdul-Hagg from the Islamic Speakers Bureau addresses the crowd gathered at the rally in Oakhurst. 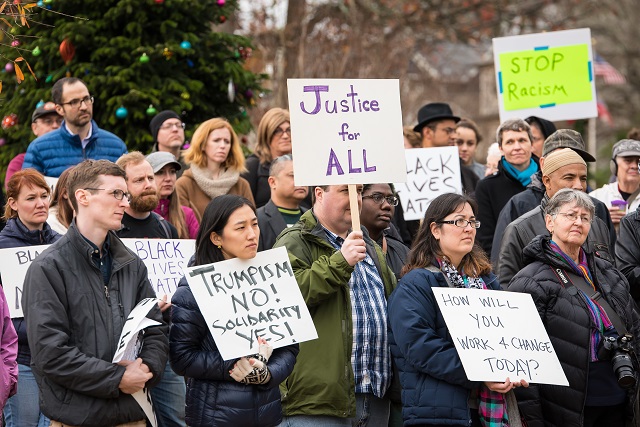 Participants in the rally listen to speakers calling for the community to work together for social justice. 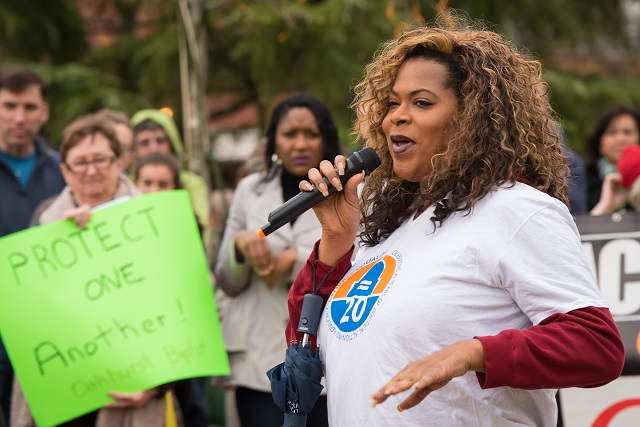 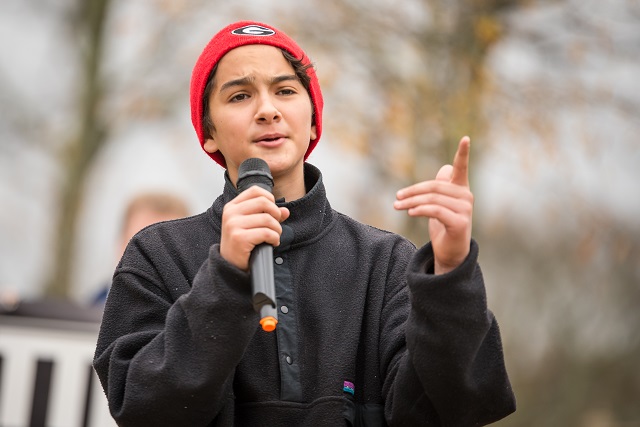 Royce Mann performs his poem, “All Lives Matter. but…” at the rally in Harmony Park. 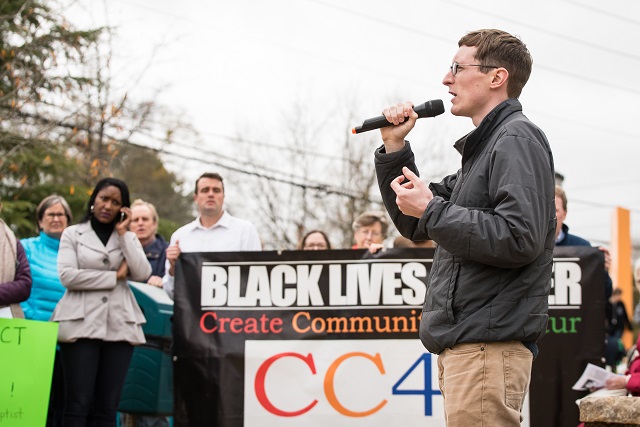 Collin Cornell from the organization Showing Up for Racial Justice speaks about his awakening to the need to fight for social justice. 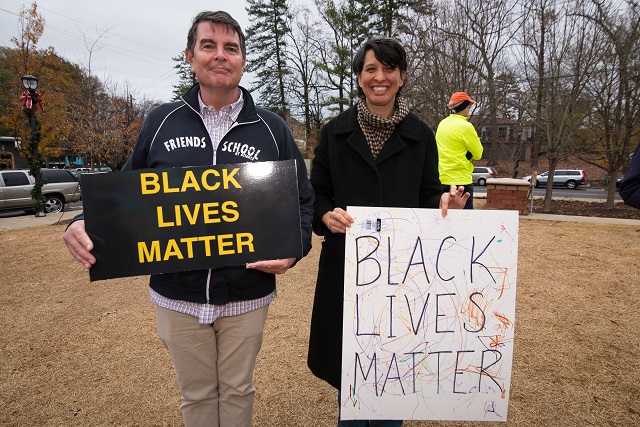 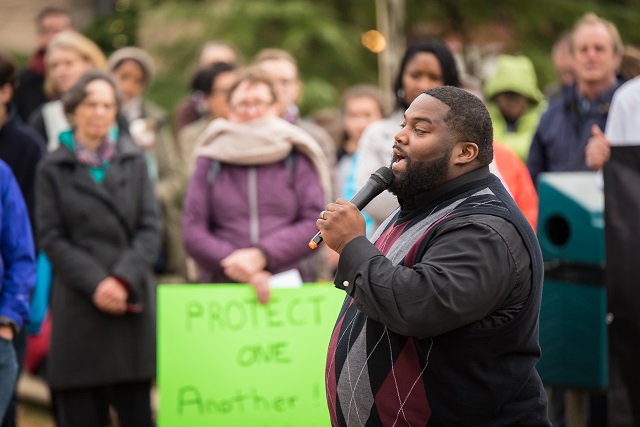 Pastor Brady Radford from Oakhurst Presbyterian Church tells the crowd gathered in Harmony Park that, “We can’t grow if we don’t struggle.” 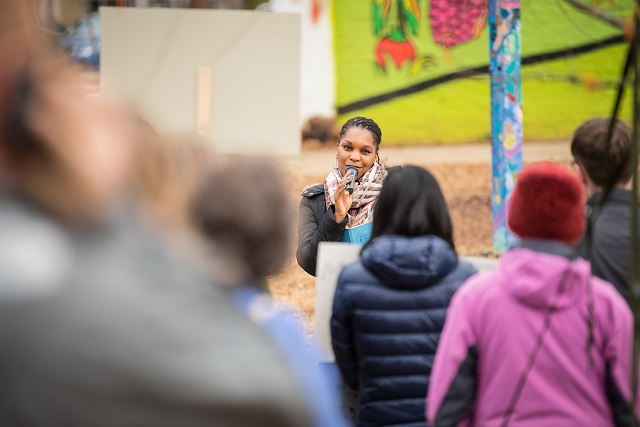 Tasha White from the Create Community 4 Decatur Steering Committee speaks about the importance of public education. 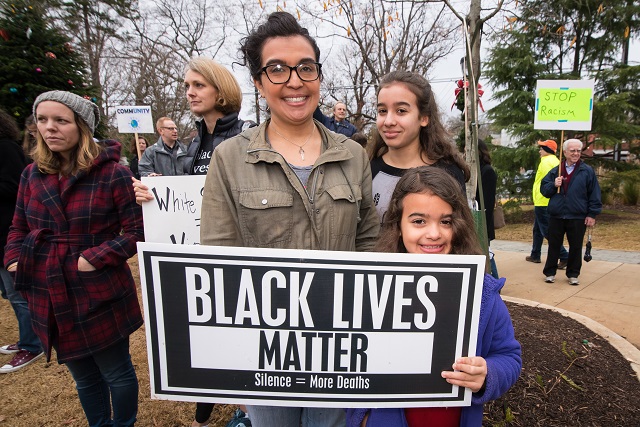 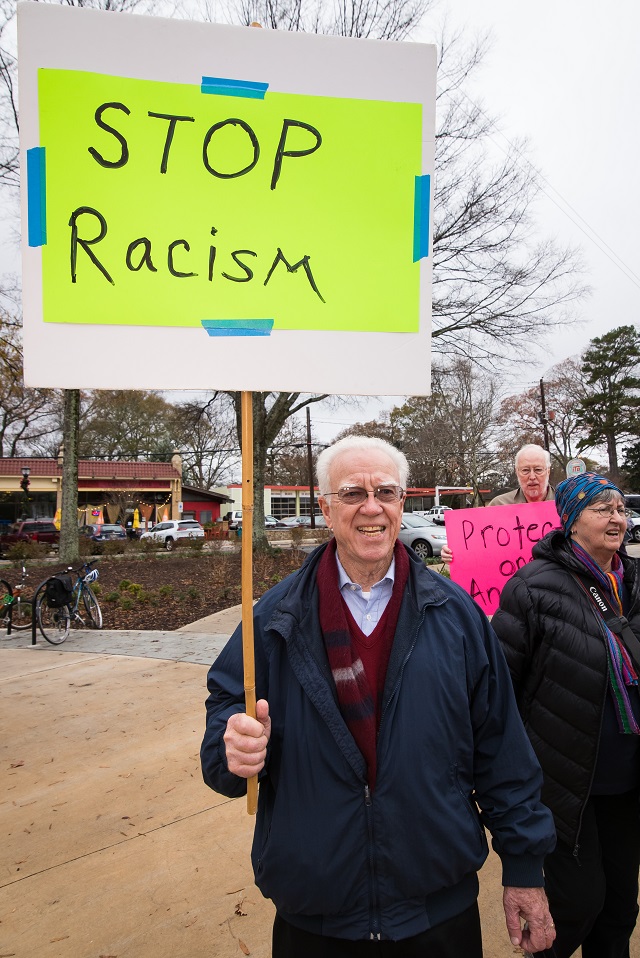 A participant in the rally in Oakhurst holds a sign that reads, “Stop Racism.” 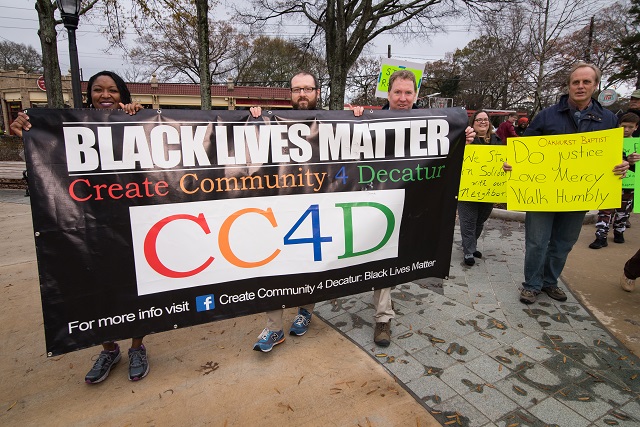 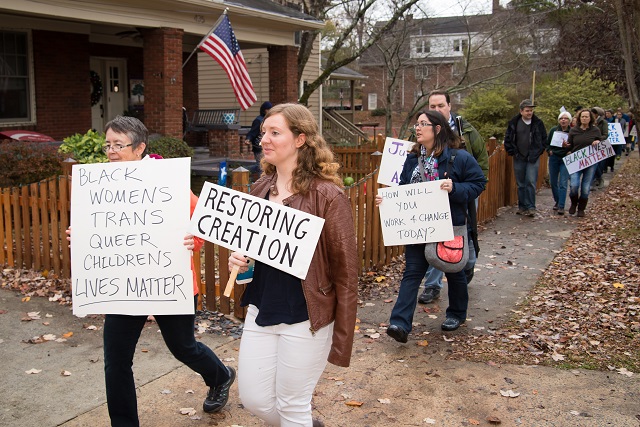 Participants march from Oakhurst Presbyterian Church to Harmony Park for the rally calling for social justice. 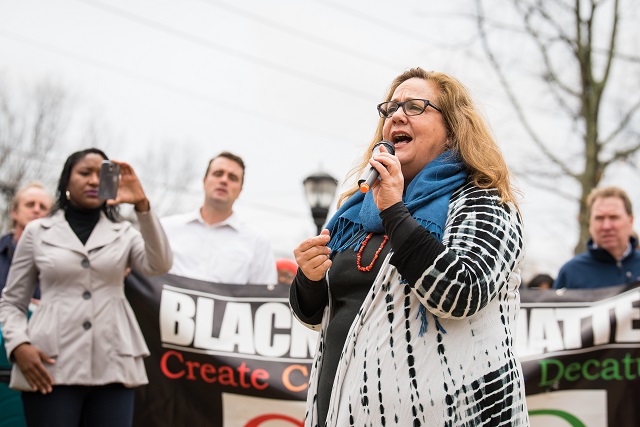 Gayanne Geurin, Leader at Congregation Beth Haverim, leads the rally in “Ella’s Song” which states: We who believe in freedom cannot rest until it comes. 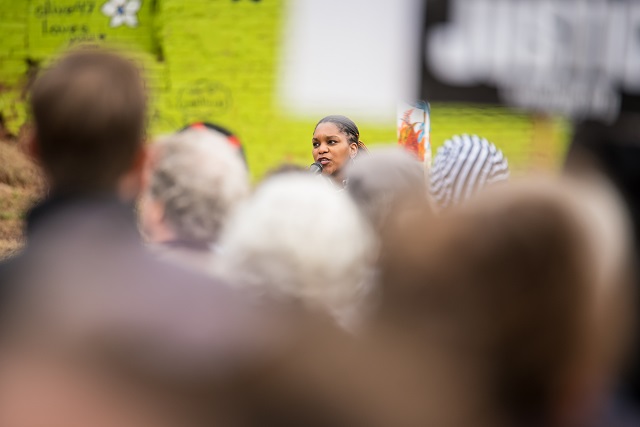 A crowd that marched from Oakhurst Baptist Church, Oakhurst Presbyterian Church, and the Atlanta Friends Meeting of the Religious Society of Friends listen to Tasha White during the rally in Harmony Park. 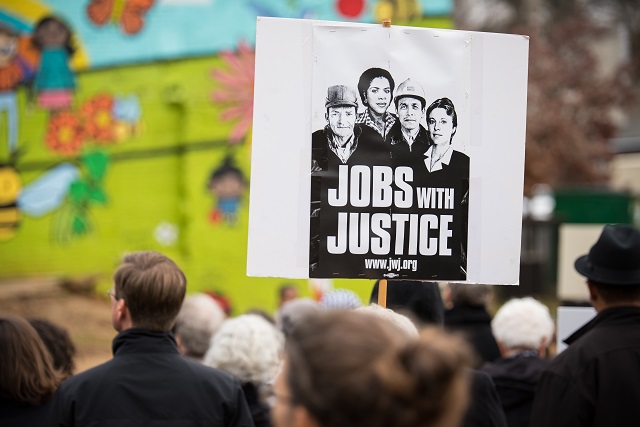 A participant in the rally in Harmony Park holds a sign that reads, “Jobs with justice.” 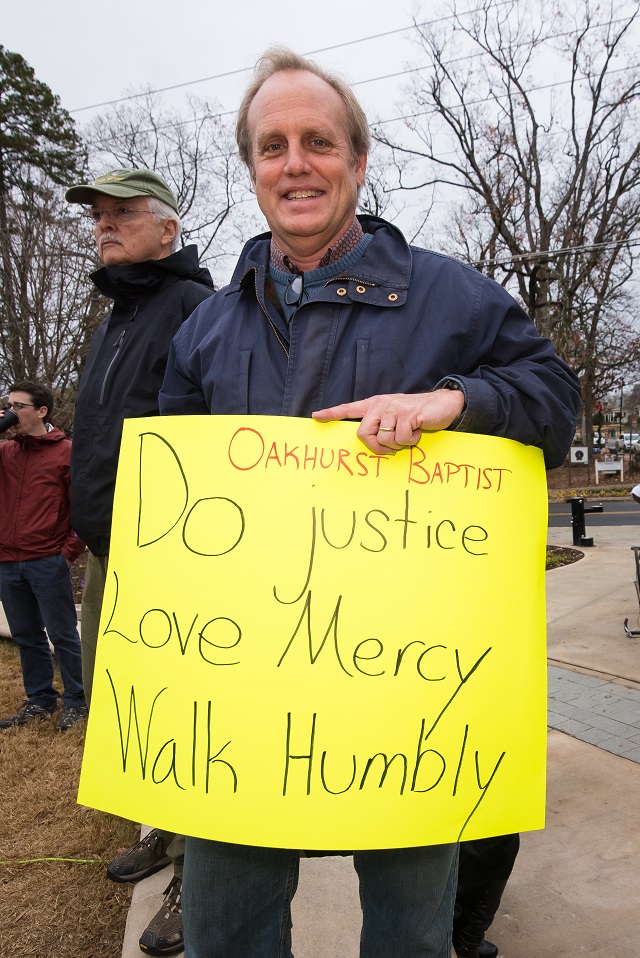 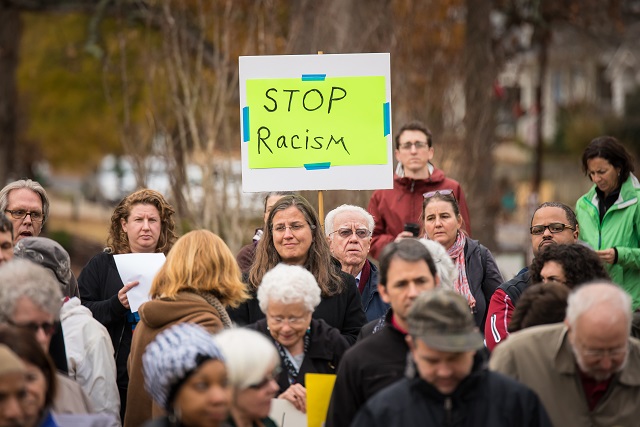 A person in the crowd in Oakhurst’s Harmony Park holds a sign that reads, “Stop Racism.” 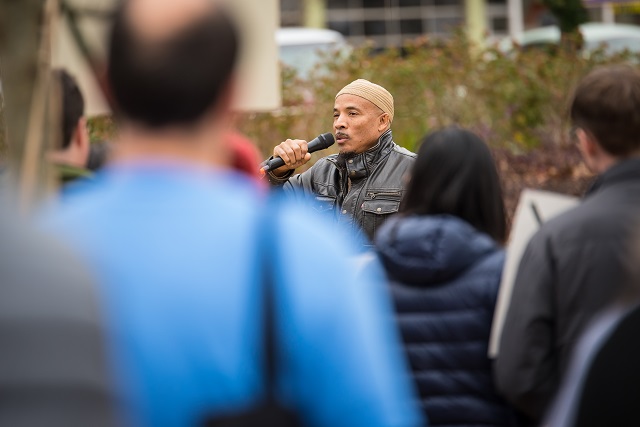 R. Tariq Abdul-Hagg from the Islamic Speakers Bureau reminds the crowd at the rally that, “We are all immigrants.” 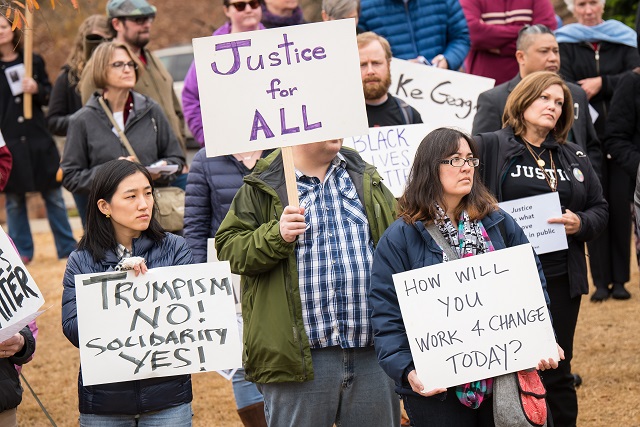 A crowd gathers in Harmony Park for the rally calling for social justice.