Hundreds of Decaturites hop on buses for National Women’s March in D.C.

Hundreds of Decaturites hop on buses for National Women’s March in D.C. 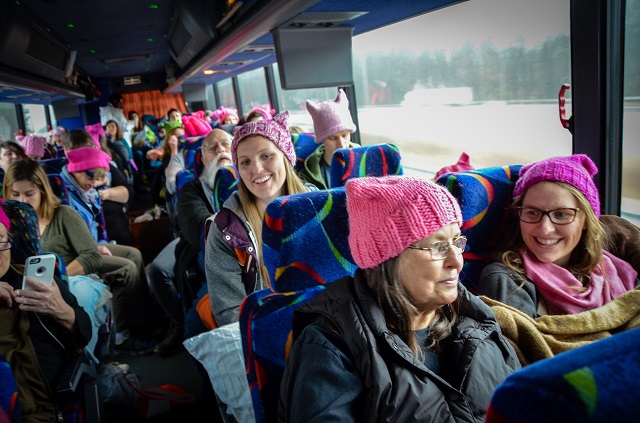 As more than 60,000 demonstrators descended on the Georgia State Capitol for the March for Social Justice and Women on Saturday, several thousand Metro Atlanta residents made their way to Washington, D.C. to join 750,000 people participating in the National Women’s March.

Many out-of-town protesters across the U.S. flew in or drove their own cars to get to D.C. for the history-making demonstration, but thousands opted to rent seats on 54-passenger charter buses organized through Skedaddle, a transportation crowdsourcing app.

Deanna Ranlett and her partner Daphne Dail Ranlett, co-owners of the Decatur-based MudFire pottery studio, organized the first Decatur bus charter through Skedaddle shortly after the Women’s March was announced in November. Deanna Ranlett of MudFire holds a sign with a pink fist that reads “Speak Out / Resist / #Indivisible,” shortly after stepping off the bus in Washington, D.C. Photo by Catie Leary

“Our original intention in organizing the bus was to serve as an introduction to feminism for our younger studio members, who recently started a feminist book club. We all decided to come and march together,” Ranlett said. “I want to mobilize and create community amongst like-minded people so that we can form a resistance to the vile, destructive nature of this administration.”

That initial bus filled up quickly, and it wasn’t long before three additional buses were chartered to leave from MudFire. Joining the robust Decatur contingent were nearly two dozen other Georgia Skedaddle buses leaving from Atlanta, Athens, Alpharetta, Marietta, Macon, Augusta and Savannah. In total, there were 1,200 buses parked at RFK Stadium in Washington, D.C. on Saturday, which is 1,000 more buses than the Presidential Inauguration attracted the day before.

Morale was high for passengers of Decatur Bus #1 as they approached the D.C. metro area.

“It’s such a special, one of a kind opportunity to be able to share in this empowering experience with so many women in my life,” Alex Thibadeau told Decaturish. “I feel it’s especially important for us as Southerners — who have such strong ties to a deeply divided past. I’m very proud of all these Georgia women. When we are all together, it feels like we could do anything!”

A spirited singalong inevitably broke out along the way, resulting in what can only be described as “the most Decatur thing ever” — an entire chorus of Decatur women belting out the hits of their hometown pride and joy, the Indigo Girls:

The Decatur contingent later learned that the Indigo Girls, who attended and performed at the Women’s March in D.C., were repping yet another hometown pride and joy — Rep. John Lewis of the “horrible” and “crime-infested” 5th Congressional District:

In addition to the Indigo Girls, the March also featured prominent social justice figures like Angela Davis, Janet Mock and Gloria Steinem, as well as artists like Janelle Monae, Alicia Keys and Madonna.

Continue below for more photos of the Decatur contingent of the National Women’s March in Washington, D.C. Karla Bradbury, a Conyers resident who traveled to D.C. on one of the Decatur Skedaddle buses, marches with a sign that reads “The world is watching!” Photo by Catie Leary Demonstrators line the march route with their homemade signs near The Ellipse in the President’s Park. Photo by Catie Leary Jamie Callen Sells, a potter at MudFire, opts for a hands-free sandwich board-style protest sign that says “Not up for grabs” on the front an d “Don’t frack with Mother Nature” on the back. Photo by Catie Leary Marching at the corner of 12th Street and Pennsylvania Avenue, a demonstrator holds a large poster above her head featuring a woman wearing a hijab alongside the caption, “We the people are greater than fear.” Photo by Catie Leary Demonstrators pack the National Mall as the Smithsonian looms from afar. Photo by Catie Leary Thousands of discarded protest signs line the barricade outside the Trump International Hotel along the march route in Washington, D.C. Photo by Catie Leary “I was upset after election, and marching here today was a commitment that I made to myself,” Decatur resident Nancy Hostetter (above) explains. “This isn’t something that I see as fun or thrilling — I’m here to have my head counted as part of the opposition against this administration.” Photo by Catie Leary 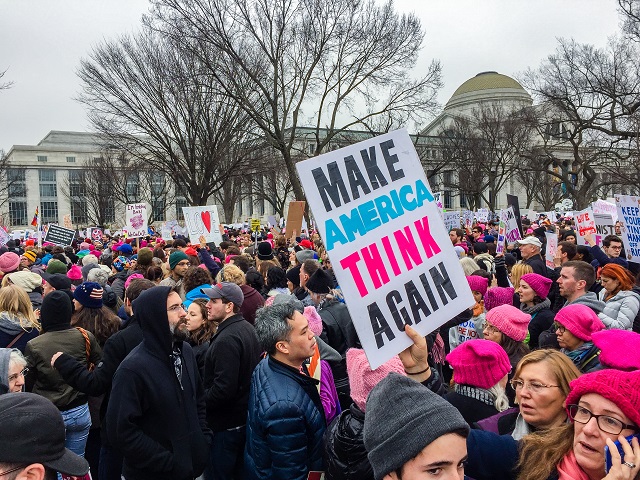