Locals will march in D.C. and Atlanta after Inauguration Day

Locals will march in D.C. and Atlanta after Inauguration Day 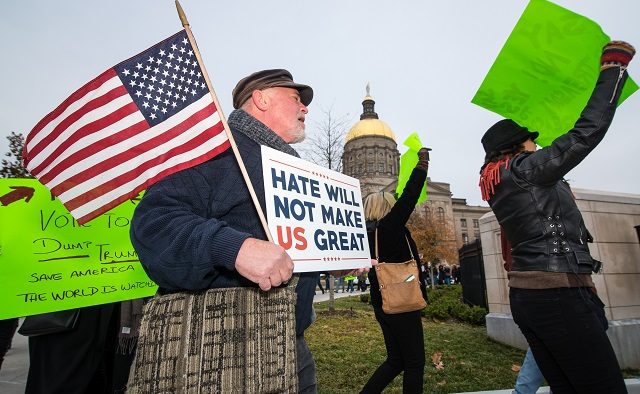 A protester holds a sign tha reads, "Hate will not make us great" as he marches in front of the Georgia State Capitol. File photo by Steve Eberhardt
Share 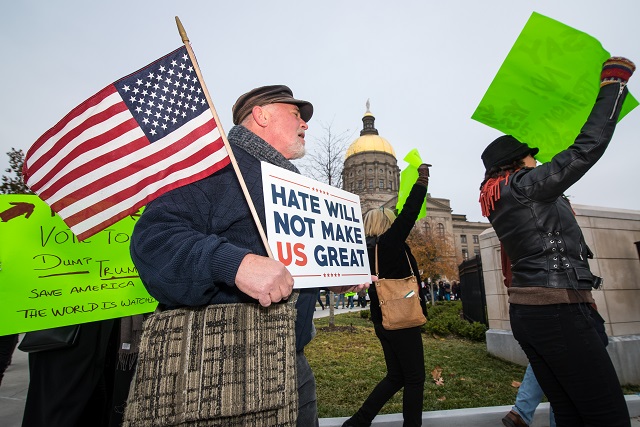 A protester holds a sign tha reads, “Hate will not make us great” as he marches in front of the Georgia State Capitol. File photo by Steve Eberhardt

On Saturday, Jan. 21, at 1 p.m., the Atlanta March for Social Justice and Women is “bringing together members of underrepresented communities, women, and their allies.” Demonstrators will start at the Center for Civil and Human Rights and end at the Georgia State Capitol around 5 p.m.

Marjorie Snook is going to the demonstration in Atlanta with her mom, cousin, and two friends from church.

“I want to stand up for all of the groups of people who [Donald Trump] relentlessly attacked during this campaign,” she said.

Snook hopes that the Atlanta March for Social Justice and Women will reveal the size of the opposition to Trump’s platform. She believes having multiple protests around the country will be helpful.

“There’s a limited number of us that can fit in D.C.”

Still, Erin Murphy and her friend Elizabeth Saliers will be in the nation’s capital on Saturday. But they’re packing their Georgia District 5 t-shirts.

“I hope that this is a wake up call for our Congress – that we’re watching and that they have a duty to serve us and protect the system of checks and balances,” Murphy said. “Also, to remind them that it’s their job to serve the people.”

Jim Hodgson and his wife Meghann will be at the Atlanta’s march on Saturday.

“It feels to us as though somehow, voices of people who are exclusionary are being heard very loudly, and we want to be around people who include,” Jim said. “We want people to understand that this should be a nation that accepts all people.”

Angelyn Dionysatos, President of the Atlanta Young Republicans, will be celebrating Trump’s inauguration this weekend.

“I wanted to be here because this is an incredibly exciting event,” Dionysatos said. “As a Republican, having our president be inaugurated is an incredible opportunity, a culmination of conservative values.”

It’s an honor to witness a peaceful transition of power from one president to the next, Dionysatos said. She said she thinks the protesters should try to look past their differences with the new president and try to work with Republicans to solve America’s problems.

“I would ask them to be open minded, to give Trump and [Vice President Mike] Pence and his administration a chance to be leaders of the country for all Americans,” she said. “I recognize that’s a difficult thing to do and if the shoe were on the other foot, it would be a challenge for sure, but I would ask people to let the administration get underway and come to the table with their ideas and try to be a part of it.

“You can protest from the outside or you can say, ‘Hey, I want to help. I believe in this country and I believe in what it stands for.’ And maybe there’s somewhere we can reach some common ground. I think that’s more effective than protesting.”

Decaturish editor and Publisher Dan Whisenhunt contributed to this story.