Scott Herman, the owner of Raging Burrito in Decatur, thought he was sharing a good quote from a memorable president, Teddy Roosevelt, on the company’s Facebook page.

The quote – attributed to Roosevelt, but of uncertain origin – is, “Complaining about a problem without posing a solution is called whining.” It was posted last Wednesday. The problem? The source of the Facebook post is Alex Jones, a controversial conservative radio host and conspiracy theorist.

Here’s a screenshot of the post taken by a reader… 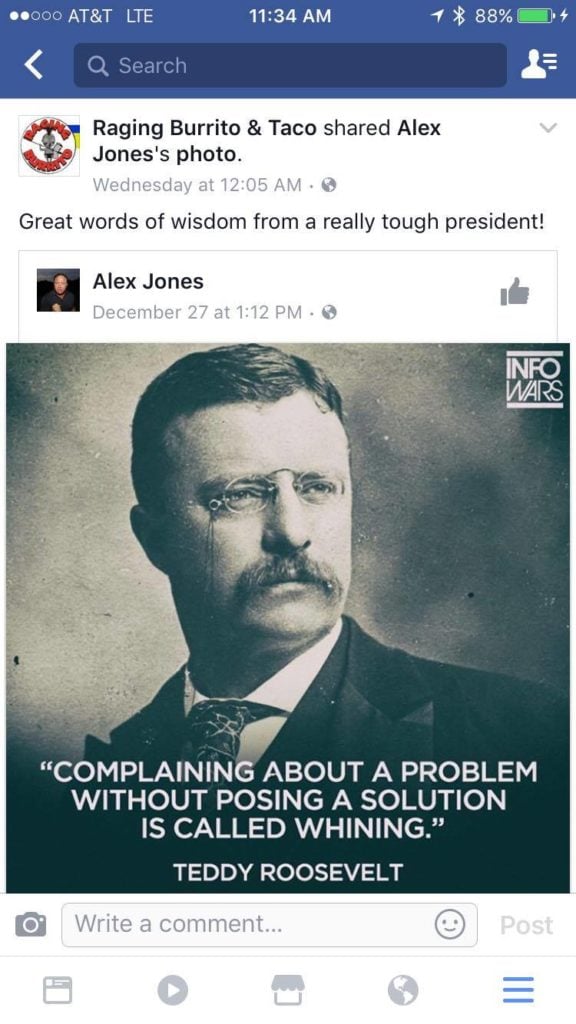 Notoriously liberal Decatur was not amused.

“From now on, we’ll be ‘whining’ and dining elsewhere,” one commenter wrote. “From a nine-year regular patron, goodbye.”

There were several comments with similar themes left on the post, which was removed without any additional explanation.

When Decaturish contacted the restaurant for comment and informed the employee who answered the phone about the controversy, she said, “Oh, God.” Herman called back within minutes.

Herman said until the controversy blew up, he had no idea who Alex Jones was.

“We did not realize what that man Alex Jones was all about when it was posted,” Herman said. “We made a terrible mistake and we are not into his ideology at all.”

He added he is “very not into the current situation with [President Donald] Trump.”

When someone directed him to a video of Jones’ comments, he said he was “horrified.”

“What a horrible, horrible man that guy is,” he said.